Crises of any kind usually require all of our attention at once. After the immediate emergency or threat passes and the brain stops pinging, reflection is possible; such was the case for me in the months following September 11, 2001. It had taken a while for the shock to wear off, but when it did, my perspective was irreparably altered and my sense of urgency was acute – for a time, anyway.

On that fateful day, the World Trade Center was quite a distance from my midtown office.  I (along with the rest of the world) fixated on the lives that were being destroyed. Having worked in 2 World Trade for several miserable years of my career,  I knew people down there, including a former colleague.

He worked on the 69th floor of Tower 2.  He played Lotto faithfully, hoping to free himself of a job and a life that took more from him than it replenished.   (In fact, we had had a Lotto subscription as a department, mentioned in The Misery Index).

The thought that innocent people were murdered for the simple act of going to work was horrible enough; knowing that, for some, they died going to jobs that they had despised made it even more tragic.

Fortunately, my friend gathered his staff and acted quickly.  While walking down the stairs from floor 44, the second plane hit.  Had they remained on the higher floor, this story might have a different ending.

That day crystalized something we already know: No day is guaranteed.  And while being the victim of a terror attack may have never crossed our minds before 9-11, we have been forced to add that to a long list of things that can change our world in an eye blink.

That tragedy kicked my ass into high gear.  I didn’t want the life I was living.  It wasn’t a terrible existence, mind you, but it was hectic and kept me postponing experiences I craved, such as spending more time with my father who was slipping into the thick of Alzheimer’s disease, and becoming a mother.

At Christmas, we gathered my entire family (over 30 people) for a family celebration.  My parents spent two weeks with us.  By July, we were expecting twins – and there were many complications with the pregnancy that kept reminding me how precious life could be – not that I needed reminding.  I wanted my life filled with the connection and meaning that can sometimes fall into the background when you’re in a constant scramble.

But that’s not to say that the wisdom remained omnipresent in my mind.  We fall into routines and often start moving to a new beat that can easily take over, and I was no less susceptible.  Tony and I started our own firm, and it became a third child – perhaps even more demanding in some ways.  Every quarter-end, tax season, and year-end generated administrative, reconciliation and billing duties that filled me with dread.  Owning our own business was a source of pride, but it kept the lines between personal time and business time incredibly blurred.  In a two-person firm – when the two people are married – it makes truly unplugging on vacation impossible.  One of my deepest wishes, to visit my family in Italy and have my children meet these incredible people, kept being pushed back year after year.

It was five years ago this month that we had a conversation with Josh Brown, Barry Ritholtz and Kris Venne; and when we decided to join them, it made it possible to plan this trip.  And yet, it took almost five years before I made it happen.

A lot could have happened in those five years that would have prevented my dream from being realized; namely, no day is guaranteed.  I had forgotten that, somehow, in the thick of being busy.

We made it to Italy this summer, and my cousins chastised me for waiting 21 years to return.  As we sat in the valley between magnificent mountain ranges I sighed and said, “If I died right now, it would be okay.” 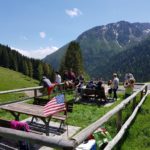 They all laughed and thought I was being funny.  Obviously, I’m not looking forward to my death, but this one burning wish was finally being realized and it made me feel sated in a way I couldn’t adequately express.

As if life had to knock me over the head, just to make sure I received the message, we returned home to one client nearing the end of an illness I was convinced she would beat.  She was a little younger than me with two sons, like me – and there she was at the end of life already.  It didn’t seem possible, and it certainly wasn’t fair.  Other clients of ours lost their adult daughter unexpectedly while we were away.  She had so much more road ahead of her; it didn’t seem possible that it had ended for her before it really began.  But, then again, heartbreak is never fair.

When I sit down with clients who have finally attained retirement age –there is usually hesitation, anxiety about not having a paycheck, about winding down; it is uncomfortable to realize that the meter is running faster and faster.  Denying it or depriving yourself of the experiences you have always dreamed of doesn’t keep the inevitable at bay.  And, importantly, crossing things off the bucket list isn’t a jinx.  It doesn’t fast-track kicking the bucket.

If there is one thing I can tell clients with certainty it’s that they will never regret having those experiences, but they may deeply regret falling ill suddenly while waiting for the “perfect time” to live it.

Planning is important, but if you don’t actually execute on your plan, life will see to it one way or another – with or without you.   Don’t let a crisis be your defining moment.