Make things happen or they will happen to you – this is true in both life and finance.

Something very significant took place in Buffalo, N.Y. this weekend.

A math teacher named Chase Mallia  made something happen.

For decades, public school teachers have been mercilessly exploited in their non-ERISA 403(b) retirement plans, often paying fees of 2-4% on inferior and non-transparent investment products hawked by salespeople posing as advisors. After hijacking retirement accounts, the predators take aim at college planning and insurance needs-infecting entire portfolios.

We liberate scores of teachers from high-cost annuities and mutual funds on a daily basis. Our goals are much bigger.

Chase came up with a resolution to stop this exploitation in the entire state, not just the sleepy village of Sag Harbor.

We agreed- ALL teachers deserve the right to fiduciary advice and low-cost investments.

He wrote a proposal to present to his Union, NYSUT, for approval.

600,000 members and an active political base, this is a big deal 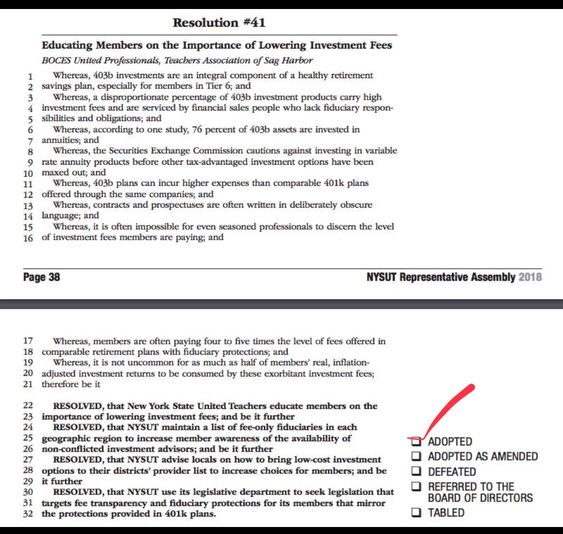 Lower investment fees, fiduciary fee-only advice, and education are the key components of this retirement renaissance.

The most important part:  NYSUT’s commitment to using its legislative department to lobby N.Y. state politicians to bring 401(k)-like protections to its members.

We need to clone Chase and send him to every district nationwide.

Despite our toxic national political environment, things can get done at the local level, mutating into a good virus of transparency and reform.

James Fallow speaks about this in his article in The Atlantic, “The Reinvention of America”. The main point: Americans don’t realize how fast the country is moving toward a better version of itself.

Connecticut and New Jersey recently passed similar legislation. This is how movements take on a life of their own; the Butterfly Effect for retirement plans.

“It’s one thing to work in what you imagine to be a lonely outpost, defending yourself against decline all around. It’s different and more exhilarating to know that you are part of something bigger and that you are going down a path others have helped blaze.”

Many financial firms are in the news for all the wrong reasons. Our goal from day one was to help reform this broken market and make the world a better place than when we began.

“Sometimes, there is a lot of darkness in this world. As I see it, you have two choices. You can be a part of that darkness or you can be the light. Be the light.”-Tom Giaquinto

We are blessed to work in a firm that does the right thing. Joining up with Chase and other brave teachers to fix this mess is an opportunity of a lifetime.

Our world just got a whole lot bigger,

Source: “The Reinvention of America” by James Fallows, The Atlantic, May 2018.