There are two types of people in this world.

Dictators fall into this category.

Believing they can only flourish by conquering, enslaving, and killing others.

Your loss is their gain.

Not everyone who holds this attitude is a murderous tyrant, far from it.

In their view, the universe is already a hellish landscape. Zero-summers are doing what’s logical for their survival.

The Villain is not necessarily “bad” or even “villainous.” In the Villain’s eyes, he is the Good Guy. He is merely acting and making choices within a universe of monsters. He must, therefore, become, in the name of Good (or at least self-preservation or the preservation of those dear to him) a beast himself.

Heroes have a different perspective.

Abraham Lincoln, Mahatma Gandhi, Martin Luther King, or Jesus of Nazareth, fall into this category. Compassion is their mantra.

Believing basic good exists in most people, devoting their lives to a non-zero-sum mindset.

No limitations are attached to the prosperity pie. Your good fortune doesn’t deprive someone else of theirs.

The Daily Stoic laments upon people being in positions of power, embracing the Zero-sum mindset.

And yet, so much of what we do is selfish and zero-sum. That’s why we lie. Or cheat. Or vote for politicians who promise to aggressively fight for our interests, even if it means that other people will suffer terribly. 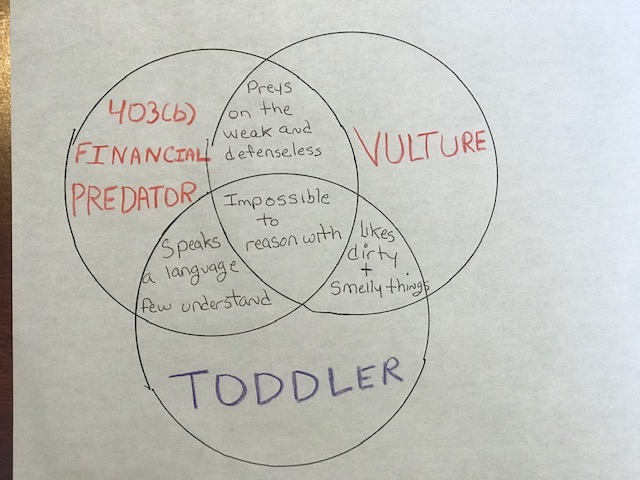 Making as much money as possible from each victim and moving on to the next kill.

Read this if you don’t believe us.

We contributed to an extensive article written by Diana Britton for Wealth Management.com. Teachers Are Getting Schooled on Retirement outlines the horrific results for teachers in this zero-sum retirement space.

The K-12 403(b) plan system is broken, dominated by high-fee products pushed by high-commission sales agents, primarily from insurance companies. These brokers may appeal to well-meaning administrators to get themselves invited into teachers’ lounges, lunchrooms, or even classrooms to pitch the investment products.

Despite all of the bad news, there’s a lifeboat floating in this fee-churning sea.

We are currently collaborating with Vanguard to institute a non-zero sum program benefitting teachers nationwide.

“This is a segment that is just ripe for disruption; the gravy train has been going on for far too long,”

We concur 100%. Laying all the cards on the table for Britton’s piece was my pleasure.

Isola, an advisor who heads the 403(b) division at Ritholtz Wealth Management in Stony Brook, N.Y., was a teacher for 20 years before starting his own RIA. In all that time, the 403(b) system hasn’t evolved much at all, he says.

“Think of how the world has changed in just 20 years, and then think of this,” he says. “It’s the land that time forgot.”

Annuities still dominate the plans with high fees and long-term contracts. According to Isola, some 70% of non-ERISA 403(b) assets are in annuities, with an average cost of around 2%.

Finally, teachers are getting a business model designed to benefit not exploit them.

Be a Hero and pass this along to someone who desperately needs it more than ever – A public school teacher.