Imagine paying for college with a subscription plan that’s cheaper than your monthly cable bill.

Prepaid-tuition plans might be the answer to your prayers.

The big difference – pre-paid options guarantee funds will be available for tuition regardless of market volatility.

Here’s how they operate according to the Wall Street Journal:

“You contribute a target amount to the plans—the cost of a semester, say, or even four years—based on a calculation that takes into account today’s rates. Then the plan operators promise that the amount of money in your account will grow to match college costs down the road, or they’ll make up the difference.”

12 states offer this program. There is a caveat. Some state plans have residency requirements and require the funds to be used for in-state schools.

Benefits can be transferred to a beneficiary or refunded if they’re not used.

Here’s an example of how this works.

Here is how savings can potentially work purchasing a year of tuition at the average private school rate 5, 10, or 18 years before a student or beneficiary enrols. This assumes 4% annual tuition increases.

Nothing is perfect. They’re downsides to going down this road. Including the fact that only 68% of people know what a 529 plan is despite the explosive tuition increases.

Each plan and state have their own rules. Including participation requirements, enrollment period, contribution amounts, tuition-package options and guidelines where the money can be used.

Not all plans are guaranteed by the same provider and tax ramifications can get murky.

A huge chunk of college costs is the bells and whistles that come with living on campus.  Some pre-paid plans don’t cover room and board.

“Prepaid-tuition plans have more constraints and won’t be the right fit for every family. Many of the plans have in-state residency requirements, meaning that states may impose limits on who can participate. Prepaid plans also can be stingier about what expenses are considered “qualified.” Some prepaid plans, for example, don’t cover room, board and other costs that are permitted use of funds in 529 savings plans.”

Despite these drawbacks, pre-paid plans may make sense for certain individuals. Especially those families who know what school their kids will choose.

About 75% of students attend in-state schools. Negating concerns about residency requirements. Pre-paid plans are terrific for families having large lump sums available for this goal.

Finally, pre-paid plans provide more certainty. Taking the market risk out of the college planning equation is more important for many parents than where their child’s school is located.

Like anything else, do your due diligence regarding pre-paid plans costs and benefits if this is something that interests you.

To increase your probability of success there’s no law against using both a pre-paid and regular 529 to finance tuition and room/board.

Diversifying investment strategies is never a bad idea. Especially if the cost of college continues its upward trajectory. 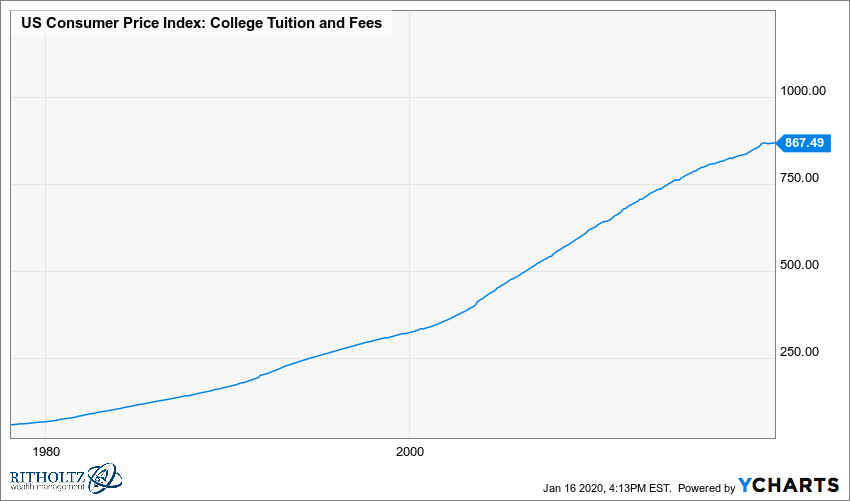 Even worse is missing loan payments.  Resulting in wage garnishment, credit destruction and even the suspension of professional or drivers license.

Who knew the subscription economy also included paying for college?

If you want to learn more – check out Savingforcollege.com’s online tool.

Sources:  What You Need to Know About Prepaid College-Tuition Plans, by Cheryl Winokur Munk, The Wall Street Journal, Best Colleges –Saving for College