It’s even worse when selling financial products are involved.

Christine Benz wrote a disturbing story about her sister and a door to door financial salesperson.

Christine’s sister, who suffers from an intellectual disability, almost became a victim to a financial predator.

Door to door financial salespeople are known for their aggressive sales tactics.

She takes note of this in her story.

I know that door-to-door calls–and, in turn, sales–have historically been the bread and butter of a handful of financial services firms. But there’s just one word for the sales tactic: desperate. Investment salespeople going door to door are banking that the people who open the door for them during the day are lonely and not particularly financial savvy–in other words, they’re financially vulnerable

Unfortunately, not everyone has a personal finance expert like Christine to protect them.

According to FINRA, there are five common tactics these miscreants apply to their victims.

Public school teachers are exhibit A. Their personal space is constantly violated by commission-hungry financial salespeople.

Instead of taking advantage of intellectual disabilities, salespeople exploit a glaring lack of financial literacy.

We have seen personally and heard stories of the following invasions of privacy.

Uninvited Salespeople camping out in teacher’s faculty and lunchrooms harassing teachers during their free periods.

Salespeople barging into classrooms and guidance meetings unannounced to harass teachers about an insurance product.

There is one school where an annuity salesperson has his own office in the basement! This enables him to launch attacks at any time during the school day.

It’s bad enough to sell someone an egregiously expensive financial product. It’s worse doing it as an uninvited intruder.

These policies are dangerous for teachers and the most precious asset of the school – its students.

Some states like Texas have such lenient criteria for school access that the only people who seem to be excluded are convicted axe- murderers.

When I was teaching I remember arriving at school early and finding an annuity salesperson wandering the hallways.

He called out to me and said, “I had met him somewhere and expressed an interest in speaking with him.”

This blatant lie helped him sign up teachers after he sneaking into the school.

I told him, “I would be there in a minute, I just had to make a call.” As he waited, I called my Principal and told him about the situation.

He arrived a couple of minutes later with security and told the Perp, “If you come back here again, I will have you arrested.”

Sadly, people like Christina’s sister or the elderly suffering from cognitive decline or loneliness frequently become victims of financial predation. Their portfolios often never recover from these aggressive sales tactics. 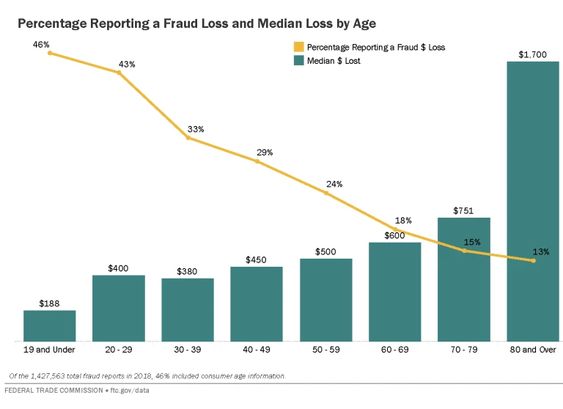 Christina gives an excellent summary of this sad situation when she states:

I’m also appalled by the fact that the industry as a whole has done such a poor job of imposing standards on individuals purporting to offer financial advice, which in turn reflects poorly on the whole profession……And despite efforts on the part of Finra and other bodies to increase advisor awareness of the interplay between cognitive decline and financial decision-making, there’s still work to be done in this area, especially as our population ages and more individuals experience cognitive impairment.

Something our parents taught us can keep us out of heaps of financial trouble.

“Don’t open the door for strangers.”