Securing insecurity isn’t the answer for a country where 25% of its people have bupkas put away.

The Secure Act passed the House 417-3! It now makes its way into the Senate. It will most likely end up on President Trump’s desk and signed into law.

On the surface, the bill sounds helpful. The Required Minimum Distribution age will be raised from 70 1/2 to 72. People can take money from retirement plans penalty-free in the event of the birth or adoption of a child. The age cap would be lifted on contributing money into tax-free retirement plans.

What most don’t understand is this bill provides a Trojan Horse for insurers to snatch their coveted holy grail –  placing annuities in 401(k) plans. 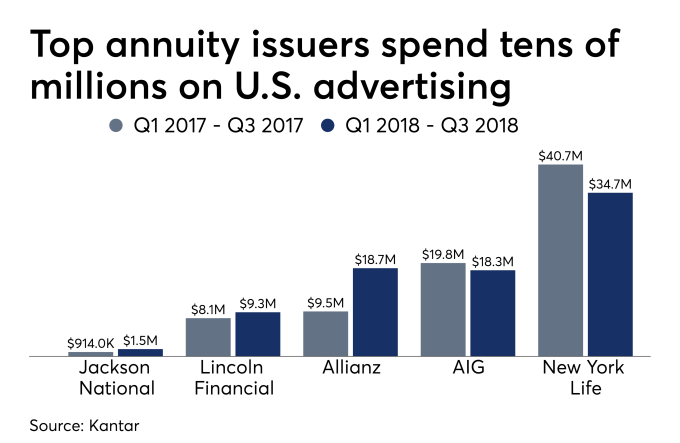 According to David Dayen of The Intercept:

“Section 204 gives a safe harbor to 401(k) plan sponsors who select so-called lifetime income products, another word for annuities, to appear among offerings to workers. This would mean that, if an employer picks an annuity provider and it goes out of business or rips off workers, they would not be able to sue the employer afterwards. That could incentivize companies to find fly-by-night annuity providers that give good deals to the companies for business, making their money by ripping off the firm’s workers before filing for bankruptcy.”

Employers aren’t responsible for workers who are sold expensive annuities that promise much but deliver little. Unless of course, you count the Tahiti vacation salespeople win for being a Top Producer.

We’ve seen this act before.

Public school teachers let the annuity foxes into the hen house almost seventy years ago. They multiplied exponentially. Their cloning and feeding strategy led to an astonishing 76% of teachers’ 403(b) assets deposited in annuity products.

This fateful decision has led to a garbage fire of bad choices.

403(b)s are ground zero for financial exploitation due to a lack of regulatory oversight. Does this clause give investors the best chance to save successfully for retirement?

Consumer advocate, Barbara Roper,  agrees. “The 403(b) market provides a living, breathing illustration of what it looks like when annuities are included in retirement plans without adequate fiduciary protections, and it is a hellscape.”

Amazingly, “The bill also makes explicit that there is no requirement for the plan sponsor to select the lowest cost contract when selecting an annuity provider.”

Simple commission-free fixed annuities can be a very helpful income stream for retirees. These products are not as lucrative for salespeople compared to their variable income cousins.

It doesn’t take a genius to figure which product will wind up in 401(k) accounts; incentives matter – a lot.

What could possibly go wrong here?

The bill also leads to opportunities for insurers to mislead workers with false comparisons.

“Another section entitles workers to a benefit statement that estimates the lifetime income they would get from the current funds in their retirement account. This is almost an advertisement for annuities, allowing workers to compare what’s in their accounts to the promises the industry can make.”

Instead of giving a free pass to insurers, how about letting all workers participate in the super low-cost Thrift Savings Plan (“TSP”)? Our illustrious elected officials love it.

Wouldn’t this be a much better and easier way to secure workers’ retirements?

Judging by their response to Dina, we shouldn’t hold our breath. 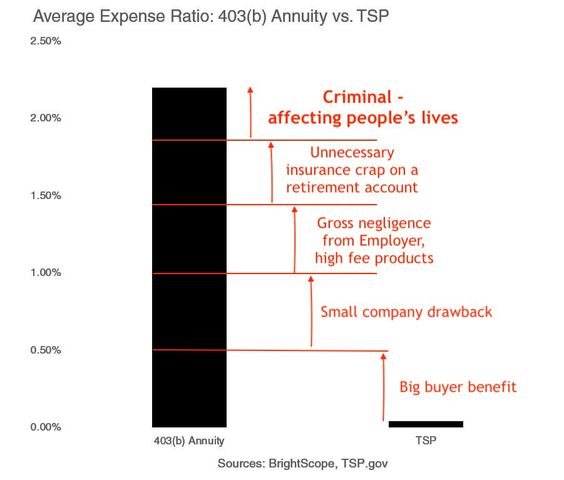 If lawmakers believe these annuity provisions will help workers save more, they are greatly mistaken.

We extend to them an open invitation to accompany us on our next school visit.

Sadly, I’m not sure if they care.

Source: “The House Has Found Bipartisan Agreement On Reform To Retirement Accounts. Be Afraid By David Dayen”, The Intercept, May 22, 2019.

Sources for Chart Average Expense Ratio: 403(b) annuity vs. TSP: