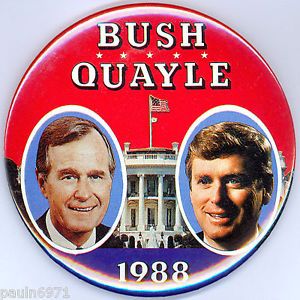 TIAA is having its own Dan Quayle moment.

Their rebuttal to accusations made by The New York Times threw kerosene onto the flaming charges of massive conflicts of interest at the retirement powerhouse. The resulting counter-punches could enter them in a league with Dan Quayle, an ill-qualified Republican vice presidential candidate in 1988.

No one wants to be on the receiving end of the greatest debate smack-down in U.S political history. TIAA could reach this hall of shame level. Just like Dan Quayle was no reincarnated version of JFK, TIAA is no Vanguard.

TIAA calls itself a selfless steward of its clients’ assets. This credo was blown to smithereens by a whistle-blower complaint that accuses TIAA of pushing “customers into products that do not add value and may not be suitable but that generate higher fees.”

TIAA is accused of pressuring its advisors to “to sell proprietary mutual funds to clients.” There might be some evidence to back this claim. Nir Kaissar wrote an outstanding article for BloomberGadfly entitled “TIAA’s Devotion to Investors Can Start with Fees”.

“According to Morningstar, net flows to TIAA’s mutual funds averaged $1.6 billion annually from 1997 to 2010. But from 2011 through September, those flows jumped to an average of $7.3 billion a year.”

If nothing else, these money flows should raise suspicious eyebrows. The red flag is not that TIAA offers high-fee products. The extreme variation in fees is what is most worrisome.

“According to Morningstar data, TIAA’s most expensive fund charges an annual expense ratio of 1.34 percent, while its cheapest charges just 0.05 percent.”

This wide divergence in expense ratios for their proprietary products opens up the door for conflicts of interest. With such a range of fees, it would not be very difficult for sales managers to provide incentives for advisors to sell the most expensive products.

This is exactly what The New York Times accuses TIAA of doing.

If product fees were in a tighter range these perverse incentives disappear.

That brings us to Vanguard, the $4.5 trillion industry giant.

They are a real low-fee company; something that TIAA professes to be, but is not.

The fees that Vanguard imposes on both its active and passive products are in a much tighter range. There is no real incentive to sell one product over another. This is not the case at TIAA and fellow industry-behemoth, Fidelity.

Unlike low-fee Vanguard, TIAA has failed to deliver market-beating returns over recent years. 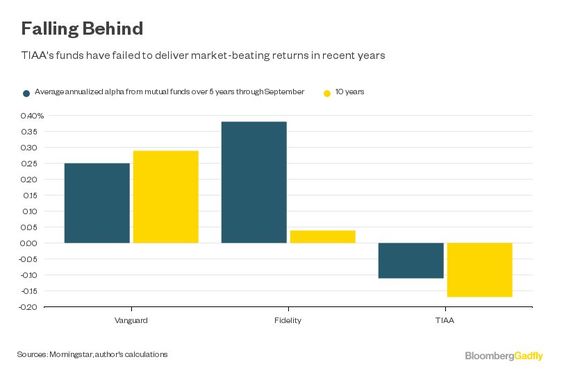 “Vanguard’s mutual funds, on the other hand, generated an average alpha of 0.25 percent annually over the last five years and 0.29 percent over 10 years. The difference between the alpha generated by the two firms’ funds is nearly identical to the difference in fees.”

Despite higher fees, according to Kaissar, “Fidelity has managed to deliver market-beating returns. Its funds have generated an average alpha of 0.38 percent annually over the last five years through September and 0.04 percent over 10 years.”

TIAA clients are left with are funds that, “deliver neither low fees nor market-beating returns.”

This clashes with TIAA’s mission statement, “’to take care of people, act with integrity, and deliver excellence,’ particularly when many of those people are teachers, researchers and public servants.”

Before TIAA can be even thought of being mentioned in the same league as Vanguard, they need to seriously look at their current fee structure and change it.

I had the pleasure of attending our firm’s Evidence-Based Investing Conference last Thursday. One of the many highlights was the fireside chat between my colleague, Barry Ritholtz, and Vanguard’s incoming CEO, Tim Buckley.

Buckley’s devotion to low-cost investing and the value of index funds is undeniable. When asked in jest what stocks to buy, he replied, “All of them.”

He is bright and engaging. More importantly, he is a staunch defender of his shareholders who, unlike  at TIAA, are owners of Vanguard funds. He explained almost every penny of profit the firm earns goes back to its shareholders in the form of lower fund fees and investments in the business; which improves the experience for fund/shareholders.

When asked if he would ever think of changing Vanguard’s unique structure, he replied, “Not on my watch.” He went on to say, “We are willing not to be a billionaire mutual structure.”

This is a far cry from TIAA’s CEO, Roger Ferguson’s $18.5 million annual paycheck.

While firms like TIAA and Fidelity offer many low-cost products, they are not marketed heavily. This is for good reason, Roger Ferguson and the Johnson family would make a lot less money.

Without naming his rivals, Buckley pulled out is inner Lloyd Bentsen and stated, “They lower costs to compete, not to help investors.”

In other words,” I served with Jack Bogle, I knew Jack Bogle, Jack Bogle was a friend of mine. Mr. Ferguson you are no Jack Bogle.”

And TIAA is no Vanguard.

Source: TIAA’s Devotion to Investors Can Star With Fees by Nir Kaissar