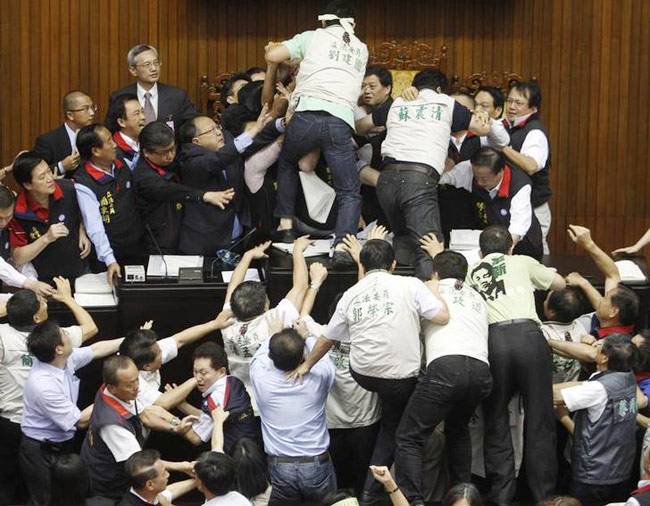 ked back upon as the year the political crazies were allowed to board the ark. The cast of global characters this year blur the relation between farcical Onion headlines and reality.

From Nigel Lafarge and Boris Johnson in the U.K., to Marine Le Pen across the channel, the global political circus is almost at full capacity. Not be left out, Germany and Austria have their fair share of ultranationalist kooks. In the states we have our own political treasure, Donald Trump; and, to a lesser extent, reformed socialist, Bernie Sanders.

Similar to poll numbers, markets behave erratically in the short term. The difference is, over time, long-term investors are rewarded. The same cannot be said for voters backing our two main parties.

The short-term gyrations also make sense with some analysis. According to Robert Shiller:  “The … best explanation for the market’s back-and-forth swings is that each day we are conducting a Keynesian beauty contest, and reassessing what others think that still others are thinking. On days without much news, the market is simply reacting to itself. And because anxiety is running high, investors make quick, sometimes impulsive, responses to relatively minor events…”

This makes sense because short-term trading is based more upon on how you think the other guy is going to react, not the fundamentals of a particular company or the economy. Keynes described this system well according to Schiller:  “Keynes supplied the answer in 1936 … by comparing the stock market to a beauty contest. He described a newspaper contest in which 100 photographs of faces were displayed. … The winner would be the reader whose list of six came closest to the most popular of the combined lists of all readers.”

Global politics has become a beauty contest in its own right. Unfortunately, voters are left with the tallest midgets in the circus. This fact is borne out by the world’s lone surviving superpower running two candidates for president, who many in their own respective parties despise.

How did we get to this point? There are many theories, but I found something that might give some clarity to the madness. Both conservatives and liberals have illogical conclusions about how our economy actually works. Conservatives, according to Brink Lindsey, believe the following:  “The coincidence of wealth with toleration has led to the bizarre paradox of a conservative movement that embraces economic change but hates its social consequences.”

In other words, social changes (like ending slavery and giving women the right to vote and work) were massively positive catalysts for economic growth. Unfortunately, many conservatives are against expanding social freedoms for certain groups.

To be fair, let’s move to our liberal friends on the other side of the aisle. According to Lindsey: “We have a liberal movement that loves the social consequences but hates the economic sources from which they come…”

Many ultra-liberals denounce all corporations as evil. They do not understand that the innovative products these corporations have produced have led to great social reforms. For example, without modern home appliances it would have been much harder for many women to enter the job market in our more traditional society of the past.

According to Matt Ridley: “It was commerce that freed people from narrow materialism that gave them the chance to be different.”

In other words, free trade and corporations are not the devils the left often makes them out to be. On the other side of the coin, our standard of living would be much lower if it were not for social progressivity. This counteracts the views of many on the right.

We have come to this riddle, which might explain a lot of the insanity we are seeing today.  As Lindsey notes, “One side denounced capitalism, but gobbled up its fruits; the other cursed the fruits while defending the system that bore them.”

These false narratives have become entrenched in both parties’ platforms leading to an irrational belief system called cognitive dissonance.

This is a fancy term for our daily political lunacy. Political beliefs become so strong that any opposing ideas, no matter how valid, are dismissed. Partisans will rationalize, ignore and deny anything that does not fit their core principals.

In the words of Bill Maher, “The problem is that the people with the most ridiculous ideas are always the people who are most certain of them.”

Misinformation is often disseminated from the ruling class to an often misinformed or intellectually lazy electorate. Rinse and repeat.

This this helps explain why a voter will be against immigration, though it has helped give his country economic growth above the others who have rejected this policy.

It also helps us understand why supporters of “free” college and health care want to limit the profits of the corporate entities which would inevitably have to fund these goals through taxation of profits.

As for me, I will stick with the markets and their sometimes brutal re-pricing of publicly-traded securities. I will take this over the manipulative machinations of political charlatans any day.

Wise investors seldom vote against their own self interests.

I am afraid the same cannot be said for the average voter.