It’s a cold fact many families witness wealth destruction on a breathtaking scale by the time the third generation arrives.

Rooting for the New York Giants is a case study of this unfortunate phenomenon.

The Mara’s are good people but awful wealth managers.

Inheriting a football team from your Dad doesn’t make one the next Vince Lombardi.

Privilege breeds overconfidence. Over the last five seasons, no NFL team has a lower winning percentage than the Giants.

This week’s debacle against the Chiefs furnished a new low. The excuse du-jour – Malfunctioning headsets! 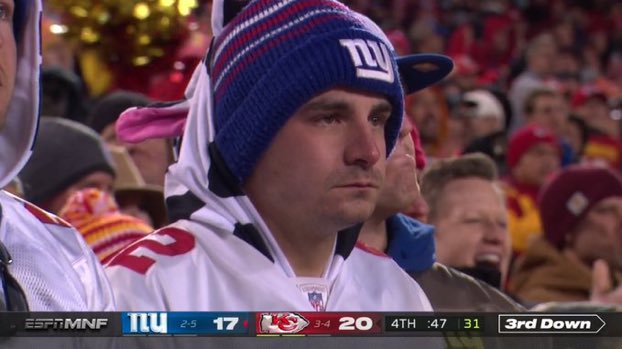 There’s a reason why a Spartacus-like rebellion is smoldering amongst the long-suffering fan base.

Third-generation leadership has many issues, the first of which pertains to nostalgia. Everyone wants to “remember when” the grandparents ran the business and continue the traditions of how the founding members operated — particularly if they were successful.

Here’s the root of the dilemma.

The other core issue is that everyone in the family wants a job — they have grown up in the business and, thus, think they know it. Reluctance to embrace change is reinforced as new family members enter the organization who have only been taught and trained in the old ways. Even though it’s perceived that young, fresh faces are entering the workforce, their methods are deeply rooted in the past. The lack of fresh blood causes stagnation and an unwillingness to listen to outside influences.

Is there a valid reason why John’s brother, Chris Mara, is Senior Vice President of Player Personnel?

Is he the most suitable choice?

Is this meritocracy or nepotism?

Michael Batnick and I root and care about the Giants. Our passion doesn’t qualify us to run the draft, sign free agents, or make trades.

The same rule should apply to family members.

The Third Generation implosion isn’t unique to the Giants.

A study by Williams Group drops some sobering data.

70% of families will lose their fortunes by the second generation. By the time this group occupies the C-Suite, ninety percent of wealth vanishes into thin air.

“Remember When” doesn’t render a blueprint for success.

Many of our clients stay up at night rueing the day when their assets pass to their children.

Fodder for nightmares rather than a sound sleep.

Proper estate planning is terrific but has its limitations.

Coaching your children with good money habits is the best insurance premium for protecting hard-earned wealth.

It starts at home.

Kids see through hypocrisy in a micro-second. Actions mean infinitely more than words.

Running credit debt, falling prey to lifestyle creep, and failing to save for the unexpected all provide terrible role models for future generations.

Teach your kids about compounding, needs vs. and wants, and managing debt.,

Live the dream. Transform yourself into an exemplary role model.

Drill your kids into being good people with high moral character.

The world’s filled its a-hole quota a few times over.

Don’t let your family team down.

Build it with an eye on the future. Instill an ability to pivot when facts change.

We already have enough bottom dwellers in New York.