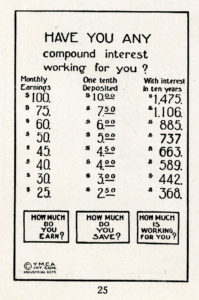 is one correctly answered question that helps to distinguish the rich from the poor; the happy from the unhappy; and the healthy from the sickly. Those who possess the knowledge and, more importantly, know how to apply it, may live the life of their dreams. Those who lack this golden ticket may be forced to live a disconsolate life of debt servitude.

According to William Poundstone, author of Head in the Cloud: Why Knowing Things Still Matters When Facts Are So Easy to Look Up, proficiency in understanding how compound interest works is a notable predictor of income, wealth and happiness.

Poundstone created a test to try and prove what kind of wisdom is necessary to create growing wealth and income.  As the years passed, when he tracked his test takers, one question answered correctly proved to be a very reliable indicator of wealth: income and happiness.

Congratulations if you answered B! Understanding this concept, according to Poundstone, leads to some fascinating results.

It turns out that 59% of his sample answered this question correctly. That represents about as many people who could properly identify a photo of Kanye West; which is more than the percentage of  individuals who could locate Venezuela on a map.

More important, it was determined that those who responded with the correct answer reported $32,000 higher personal annual income and more than twice as much in savings.  This group also rated as 15% happier, according to Poundstone.

Why is the knowledge and application of compound interest so vital to a happy and wealthy life?

“The most powerful force in the universe is compound interest.” This quote has been inaccurately credited to Albert Einstein. Often, really smart people are credited with saying stuff like this but nobody can confirm its true author.

Both debt and investment returns are calculated using the geometric method. If used correctly, this is the path to great wealth. Ignorance of this concept often leads to accumulation of great debt and bankruptcy.

Think about those individuals who don’t grasp the power of compounding. Pay day loans, maxing out credit cards, enormous student debt, and unsustainable mortgages are often the unpleasant repercussions of their blindness to this concept.

On the contrary, according to Poundstone, “Successful entrepreneurs do not work ten thousand times longer or harder than everyone else. Instead they find a way to grow their business exponentially, for a few years.” Bill Gates and Facebook founder, Mark Zuckerberg, are prime examples.

Mere mortals like us can also acquire riches utilizing the power of time combined with geometry. Poundstone gives investors confidence when he states, “A worker who starts saving at age twenty-one has a shot at earning more return on his investments than the sum total of his lifetime wages.”

Understanding the awesome power of compounding is just as valuable as a $250,000 private university education; probably more so, because it is highly unlikely to be taught this iron law of wealth creation in a classroom.

The moral of this story, regarding your investment portfolio, is that time in the market is much more important than timing the market. When it comes to long-term success, investing early is a supreme strategy to stock picking; investing in hedge funds, or IPOs; or any other fancy story being peddled by a financial charlatan.

Some may say it is too late for them to take advantage of this secret they never learned in school. I would disagree. A healthy fifty-year-old person may live another 40-50 years based on the latest actuary data. This gives him an opportunity to make up lost ground if this newfound awareness is combined with a heavy savings rate directed into a low-cost, globally-diversified portfolio.

If you have determined your situation is hopeless, there is still something very important you can do.

Pass this information on to your children, grandchildren, nieces, nephews or any other young person that you can find. The laws of Karma will shine favorably on you.

Make it more interactive and show them this calculator:

Watch their eyes widen when the numbers begin to explode. I used this in my classroom with great success. Not informing the next generation is not an option.

Condemning future generations to a life of debt servitude is something we all want to prevent. This is becoming more of a reality with student loan debt recently surpassing one trillion dollars.