Americans need to apply this thinking to their diets and portfolios.

Nobody ever went wrong compounding money and eating healthy.

Focusing on the latter, we eat terribly.

According to Bill Bryson,

Astonishingly, a can of soda contains more than fifty percent of the daily recommended maximum sugar intake for adults.

Many of the foods we consume regularly contain dangerous amounts of sugar. We layer them on our food, blissfully unaware of the poisonous effects on our bodies.

Ketchup is almost a quarter sugar.

Even healthy foods like fruit are genetically modified to contain much higher sugar content than our ancestors spent their days munching on.

The most popular vegetable in America is…wait for it -French Fries!

Bryson concludes: In the United States, we are left in the bizarre and paradoxical situation that we are essentially the world’s most overfed nation but also one of its most nutritionally deficient ones.

The same goes for our investment portfolios. We are one of the world’s richest nations, but many investors own the investment equivalent of Corn Dogs in their retirement accounts.

The damaging effects of refined sugar and high-cost mutual funds are ticking time bombs for our health and wealth.

There’s no good reason on earth why anyone should own a mutual fund charging more than 1% in annual fees. All the research indicates low costs are the main indicator of how investments perform.

Even worse, many of these funds are closet index funds. Meaning they mimic the holdings of almost zero-cost index funds, except they charge about 100x more for the privilege of ownership.

Some even have the audacity to charge 5% or more to join their “exclusive’” club in the form of an up-front sales charge.

Portfolios laden with these retirement-killers contain more fat than the 2310 calorie dish of Fettucine Alfredo served up at the Cheesecake Factory.

Don’t worry, it only takes a ten-hour stroll after your meal to burn things off.

Just like eating, too much of the same investment isn’t a good thing.

Many investors overload their portfolios with large concentrations in single sectors. Lately, we see this with technology stocks.

What it does create is a potential unrecoverable disaster if things don’t work out as planned.

Finally, owning too much stock in the company you work for is a big No-No.

Just like double-dipping at the Desert bar at the local Chinese Buffet (Yes, people do this.), this decision is fraught with danger.

Making one huge bet that your companies financial success will determine your odds of a prosperous retirement is a dangerous gamble.

If you don’t believe me, ask former Enron and General Motors former employees how things worked out for them after their employers declared bankruptcy and their company stock holdings were reduced to zero.

Currently, long-time workers at the former Blue Chip, General Electric are in the same predicament. 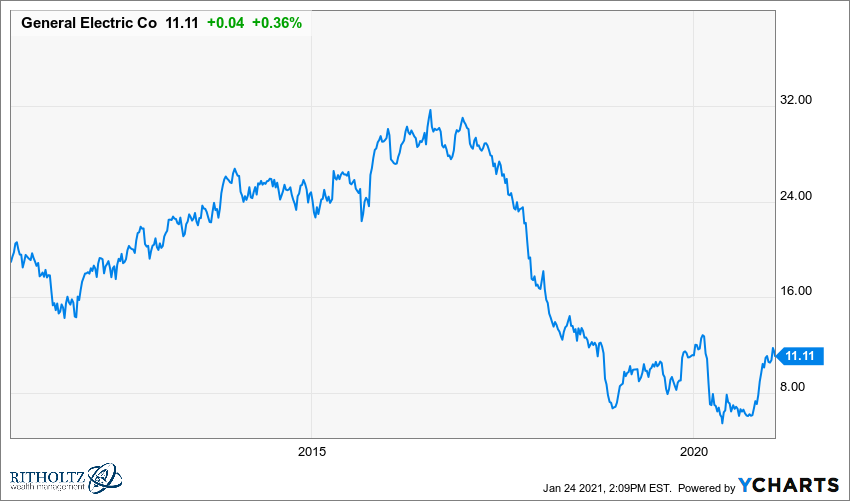 The bottom line is eating food with empty calories is the equivalent of a slow death sentence.

Nutrient-dense food and investments are the smarter choices.

Low-cost index funds provide an abundance of vitamins and minerals for your portfolio.

Source: The Body by Bill Bryson