The worst thing you can be is average. – Anonymous

Average investors may disagree. Bland and mediocre investing minted many new millionaires over the last several decades. More on that later.

Turning to the past, we find another field where mediocrity was a preferable destination to carnage.

The French Philosopher Michel De Montaigne (1533-1592) lived during times of violent religious extremism. France suffered through brutal civil wars pitting Protestants against Catholics. No one was safe. Cities fell mercilessly. So many bodies rotted into the Seine River it turned red with blood.

Women and children were granted no pardons from the barbarity. Sarah Bakewell described the cruelty in her magnificent biography, A Life Of Montaigne.

Some groups were composed mainly of women or children. Catholics interpreted the latter’s presence as a sign God himself favored the massacres. He had caused even innocents to take part.

Both sides were guilty of unfathomable cruelty.

The French Religious Civil Wars confirmed the need for mediocrity over extremism. Witnessing daily horror on a first-hand basis does that to a person.

Montaigne proclaimed mediocrity equated to greatness. Heresy to the Type-A’s but something worth considering in a chaos-filled world. Kindness, empathy, and self-reflection require no superpowers. Montaigne saw these qualities as guardians against extremism.

Montaigne distrusts godlike ambitions. People who try to rise above the human manage only to sink to the subhuman. They seek to transcend limits and instead lose their ordinary human faculties. They are genuinely human means being orderly, regular, and moderate. Mediocrity does not mean the dullness that comes from not bothering to think things through or lacking the imagination to see beyond one’s viewpoint. It means accepting one is like everyone else.

One would think he was describing the magnificence of a simple 60-40 stock and bond portfolio. Boring and average but free from extremism and unnecessary market violence. Mediocrity has been the recipe for superior risk-adjusted returns over the last several decades. 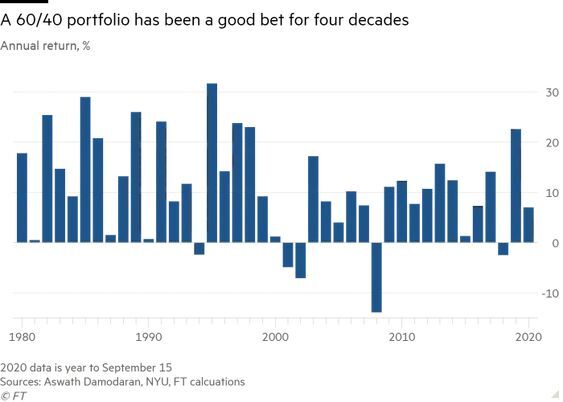 In times of war, inflation, and pestilence,  conflicted scaremongers, attention seekers, and the terrified stoke the horror. Portfolio extremists come out of the shadows to convert the suffering with promises of eternal life.

My Colleague Josh Brown points this out. The Ukraine War provides fodder for modern-day mediocrity haters.

If, however, you fell prey to the charlatans of the newsletter game, the macro bullshitters of Twitter, the Bubble Boys (everything is a bubble, all the time), the Lehmanites (it’s always Lehman O’Clock somewhere!), or the very worst practitioners in financial media who use the spreading of fear and the sowing of doubt as to their primary means of attracting capital – well, things probably haven’t turned out remarkably well. It will be hard to replace a decade’s worth of investing returns. You would need the stock market to fall 70% to get back to where it was in 2012.

In times of peace, their record isn’t much better. Stockpickers can’t beat the averages.

The future is unpredictable, and maybe 2022 is the death of the 60-40 portfolio. As Montaigne liked to say, I suspend judgment, or What do I know?

It would be shocking if a bland mix of low-cost stock and bond index funds in some combination didn’t work for future investors and contemporaries.

Extremism is toxic for the body, mind, and wealth creation.

Mediocrity is a beautiful strategy for most investors. Embrace it.

Source: How To Live or A Life Of Montaigne by Sarah Bakewell.