History doesn’t predict the future.  It does predict how homo-sapiens typically react to the unexpected; hint — usually not good.  Morgan Housel describes the mistaken lessons of history in Ideas That Changed My Life:

“History is abused when specific events are used as a guide to the future. It’s way more useful as a benchmark for how people react to risk and incentives, which is pretty stable over time.”

This brings us to the latest President Trump cray-cray; the imposition of Great Depression-like tariffs on both our enemies and, inexplicably, our friends.

On cue, the self-serving prophets of doom appeared. My colleague, Josh Brown, calls them, Ministers without portfolio.

Smoot-Hawley was the most protectionist trade bill in U.S. history. Its effect on world trade was significant and considered by many to be a major cause of the Great Depression.

According to the Wall Street Journal, “Global trade contracted. U.S. imports, which were $5.9 billion in 1929, fell to $2.1 billion over the next three years. Deflation took hold.” 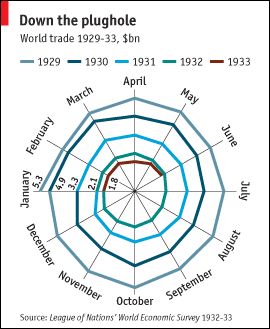 President Hoover signed this monstrosity despite the appeals of 1,028 economists.

After Trump’s announcement, the market fell and the “gloomsters” rejoiced.

Market headlines for the next few weeks (or months):

Stocks Lower as Investors Fear the Impact of Tariffs

The feeding frenzy commenced.  “Donald Trump is Herbert Hoover 2.0 and we are about to revisit the horrific 1930s.”

The charlatans continued, “An 80% depression like drawdown in stocks could be in the cards once the cycle of trade retaliation begins.” After all, “We have seen this movie before.”

Today, there is considerably more global interdependence. No one (we hope) is stupid enough to think their nation could go it alone. Who would put our stuff together so cheaply?

A consumer rebellion would stop any trade war in its tracks.

Communication has changed drastically. We no longer get our info from newsreels at the movies. High-speed internet access replaced “the golden age of radio.”  When global markets collapse, everyone knows; time to call in a coordinated Central Bank strike, in real time.

America has entitlement programs and FDIC bank insurance, which were non-existent in 1930; making the effects of a global trade war more savage.

Tariffs weren’t the sole cause of the 1930’s market implosion and economic collapse.  Overseas, things were enormously different.

Germany just finished with hyper-inflation. Adolph Hitler and his Brown Shirts were about to gain power. Today, it’s against the law to give a Nazi salute.

Japan has a nationalist bent, but they aren’t about to invade China and use prisoners for bayonet practice.

Vladimir Putin is a thug; Joseph Stalin was a monster. Trying to hack an election is not equivalent to starving to death millions of your own citizens.

China is still “communist” while churning out a new billionaire every five days. The “communists” would have something to say about the evaporation of asset values.

Most of the world’s remaining dictators love their money and imported toys.

Past events leave questionable clues on the consequences of a future Trump-inspired trade war.

What can we learn from history?  Investors don’t like surprises. They fear the worst-case scenario. They sell stocks and ask questions later.

Once their nightmares subside, they focus on something else; rinse and repeat.

Studying history proves anything can happen, but probably won’t. Be prepared for major shocks but they will be rare.

If your current advisor is trying to terrify you with talk of trade wars, and global conflict, it’s time for you to find another advisor.

Preferably, one who understands the lessons of history shouldn’t be employed as scare tactics.

As Jason Zweig once said, “In investing, only the survivors get paid;” trade war or not.