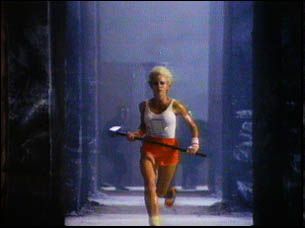 Some believe wealth inequality combined with its resulting populism could finally kill the rampaging bull.

Many investors ignore this at their own peril as they scan short-term quarterly earnings reports and weekly economic figures.  They may be missing seeing the forest through the trees. Revolution is the ultimate Black Swan.

Thirty percent of U.S. households have zero or negative non-home wealth. One thing is certain; this is not the location of the “cash on the sidelines.” 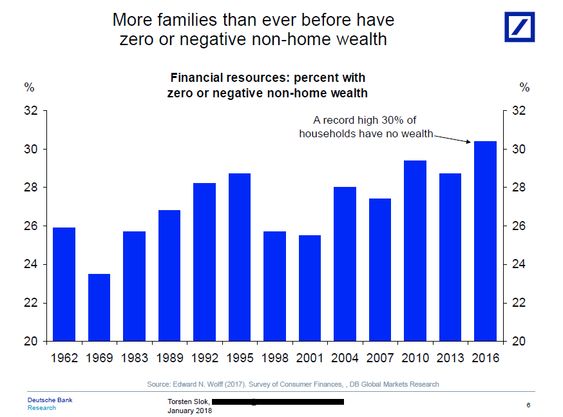 The question is: What, if anything, can we do to alleviate this?

Unfortunately, wealth inequality is a feature, not a bug, of democracy and capitalism. 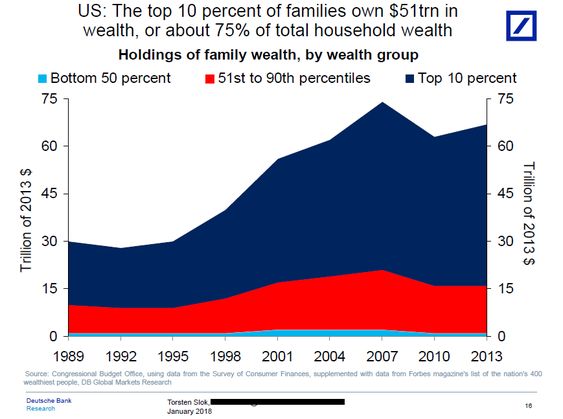 Good news for the haves, not so good for everyone else.

Recently, my colleague, Ben Carlson, (it’s still cool to say that) wrote about the inequality of equity ownership.

“According to research from the New York University economist Edward Wolff, the top 10 percent of American households1 now own 84 percent of all stocks. That’s up from 77 percent ownership in 2001.”

90% of America barely participated in the massive bull market the last several years.

“The majority of middle-class wealth is tied to homes, as more than 60 percent of investible assets are in a primary residence. Stock ownership makes up less than 10 percent of total assets for the middle class.” 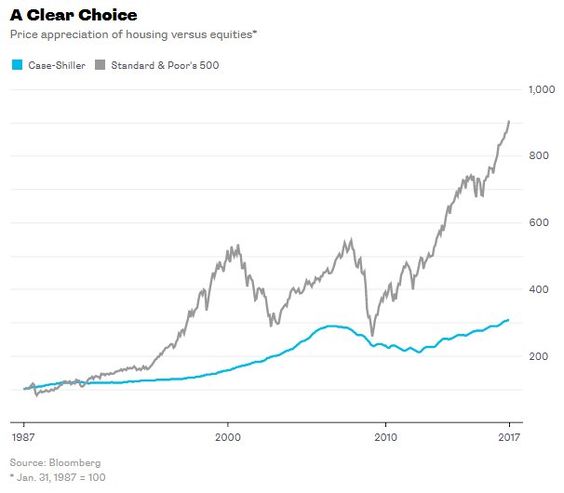 The fact that 45% of workers lack access to a company-sponsored retirement plan compounds the problem.  Someone a tad older than Ben agrees.

“The market system, however, has also left many people hopelessly behind, particularly as it has become ever more specialized. These devastating side effects can be ameliorated: a rich family takes care of all its children, not just those with talents valued by the marketplace”. 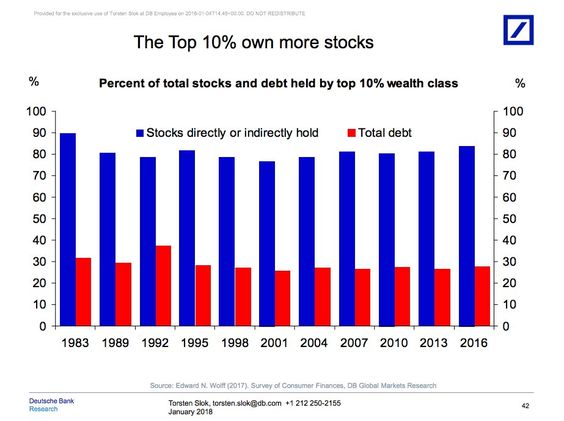 Not according to the classic, The Lessons of History by Will and Ariel Durant.  Written decades ago, it shines an old light on why free society features more inequality the more specialized and complex it becomes.

“Inequality is not only natural and inborn, it grows with the complexity of civilization… every invention or discovery is made or seized by the exceptional individual and makes the strong stronger, the weak relatively weaker, than before.”

Think of a company like Facebook, which employs less than 20,000 people. Titans of the past, like General Motors, hired ten times this amount. The riches get spread more narrowly with the rise of the robots.

“Economic development specializes functions, differentiates abilities and makes men unequally valuable to their group. If we knew our fellow men thoroughly we could select 30% of them whose combined ability would equal that of all the rest.”

Probably more like 20% according to the Pareto principle (which states about 20% of the people are responsible for all of mankind’s most important accomplishments).

Are freedom and equality sworn enemies?

Trying to stop this can lead to even worse outcomes.

“To check the growth of inequality, liberty must be sacrificed, as in Russia after 1917. Even when repressed inequality grows; only the man who is below the average in economic ability desires equality… Utopias of equality are biologically doomed, and the best we can hope for is an approximate equality of legal justice and educational opportunity.”

In a Darwinian manner inequality gives society a survival advantage. Ability is allowed to grow and flourish lessening the possibility of the destruction of the state.

While many of the above points are valid, we have much work to smooth out the rough edges of Capitalism.

Regarding educational opportunities, most inner city public schools are an epic fail. I saw this first-hand and it dooms the chances of kids who were already born with the deck stacked against them. 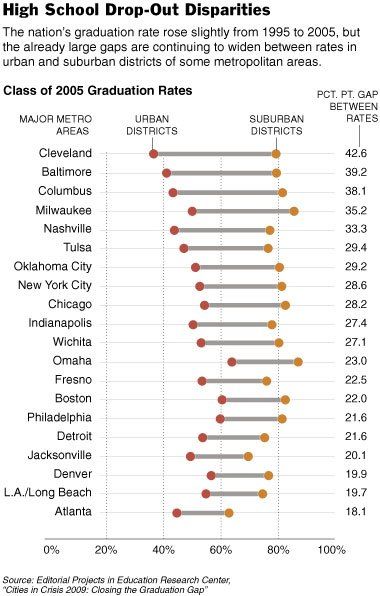 The key to higher education, the SAT, has become nothing more than a wealth test. Rich parents hoard the dreams of others by spending thousands of dollars on tutors and consultants. This unfair advantage does not end here. Legacy admissions,  often called Affirmative Action for white people, are a crime against equality; rewarding rich donors but depriving a sound education for those who need it most.

Making a mockery of the equality of the criminal justice system, look at how Wall Street types who rob billions of dollars are treated compared to low-income people who steal hundreds. Expensive lawyers can do wonders if you are lucky enough to be able to afford one. Political contributions also help grease the wheels of injustice. 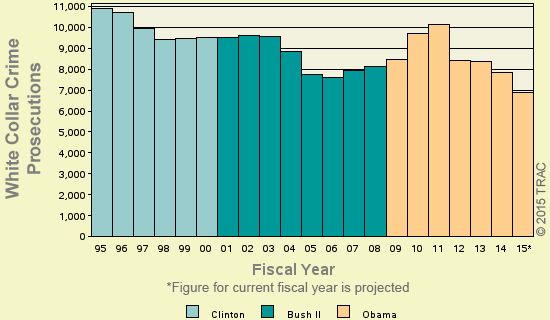 Regarding stock ownership, making the Government Thrift Savings Plan accessible to anyone without a work place option would be a gigantic step in the right direction.

Finally, the new tax bill exacerbates the wealth gap by transferring more wealth to those who currently possess most of it – rich people (unless, of course, you believe in the discredited myth of “trickle-down economics”).

We are still waiting for the crumbs to fall. 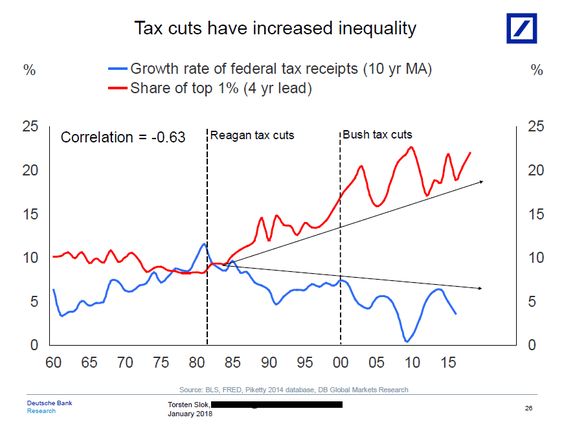 Maybe what’s needed is a modernized New Deal program to repair our decrepit infrastructure and a new civil rights movement to protect women from the barbarities of male-dominated industries.  Public schools need to move far beyond their assembly-line model.

How about throwing some corporate types into the slammer?

For many, ideas like these would lose a popularity contest to Cersei Lannister (obligatory GOT mention).

That being said, for our system to function properly there needs to be a degree of inequality. The alternative of making everyone equally poor is not an option.

The question is how much and what is the breaking point?

We may soon find out.

Source: The Lessons of History by Will & Ariel Durant

You can see more of these depressing charts courtesy of Deutsche Bank here.