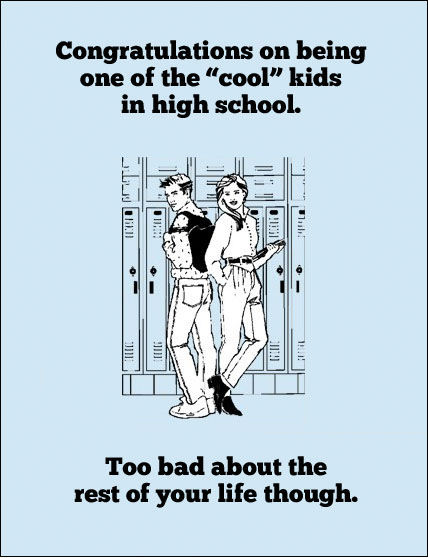 Too many people are servants to the bells and whistles of the devastating distractions of their electronic devices. Others nauseatingly suck up to their egotistical bosses in a degrading pursuit to move up the corporate ladder of suits.

Still others are servants to ridiculous trendy fashion statements. Their desperate pursuit to be one of the “cool kids” leads them to poor decision making. Newsflash: $700 sneakers with matching gold plated Beats are not the Webster’s definition of a “need.”

Many have become real life caricatures of the satirical song Cool Kids.

“I wish that I could be like the cool kids.

Cause all the cool kids, they seem to fit in….

In the fast lane, living life without knowing.”

Finally, many try to recapture their youth by resorting to the scalpels and lasers of plastic surgeons. The end result: An exploding army of terrifying and expressionless, wax-faced mutants roaming the malls and restaurants of Long Island.

Maybe I am getting old and cranky, but there has got to be a better way.

Too many are acting like voluntary servants in various aspects of their lives. Is it necessary to have yet another form of bondage tied to the financial markets?

A large number of people chase the financial version of a fountain of youth dream:  i.e., market-beating returns. This maniacal pursuit often ends up in something far different than their original goal.

Dalbar recently came out with an update on how the average investor fares in comparison to basic market indices over the past 30 years. The results are not pretty. 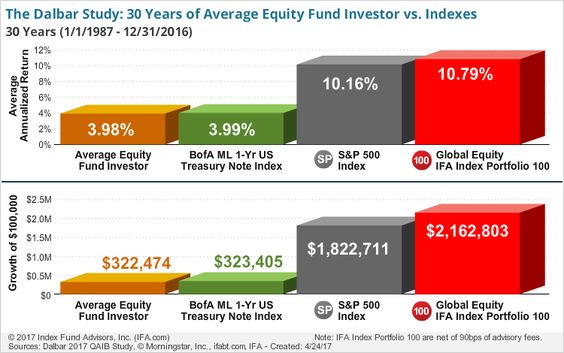 Though many fairly question if Dalbar’s numbers are somewhat over exaggerated, most would agree this behavior gap exists.  It appears that chasing market-beating returns is a form of investor servitude; trying to time the market and making concentrated sector bets have led to disaster for most who have tried.

Believing those who promise the “Garden of Eden” of market-beating returns creates passive servants.  A strong desire for this fairy tale outcome leads to dependency on the people who (supposedly) possess this magical power.

This is no different from the servitude caused by the pursuit of making sure a child goes to a “name” college just to make the neighbors seethe with envy. Is it really necessary to spend $70,000 annually in tuition rather than $24,000? Is this price worth it to satisfy a peer-pressure-driven “want,” rather than an actual “need”?  The lingering effect of tens of thousands of dollars of student debt is the end result of a servant mindset.

The greatest form of financial power is indifference towards the almost irresistible group-think that we are constantly exposed to regarding many areas of our finances.

Tempering desires to reasonable goals, such as earning market-like returns and affording college without incurring debt, shows there is immense power in simplicity.

Constantly looking for approval, having unrealistic expectations, trying to be 19 again, and appeasing a cruel boss will lead to a life of servitude and misery.

Liberation from one aspect of this minion-like lifestyle is simple: Break the chains of investment bondage. Desire nothing more from the markets than they are willing to give; like the real cool kids do.