In stunning news, it has been determined that exercise can actually make people fatter, if they do not watch their diet. The same can be said for a very active investment portfolio. It is no surprise that the only thing investors receive from high turnover, actively-managed mutual funds are fat fees.

As seen in the chart below, most investors would be better off owning simple index funds than paying mangers to pick stocks and bonds. 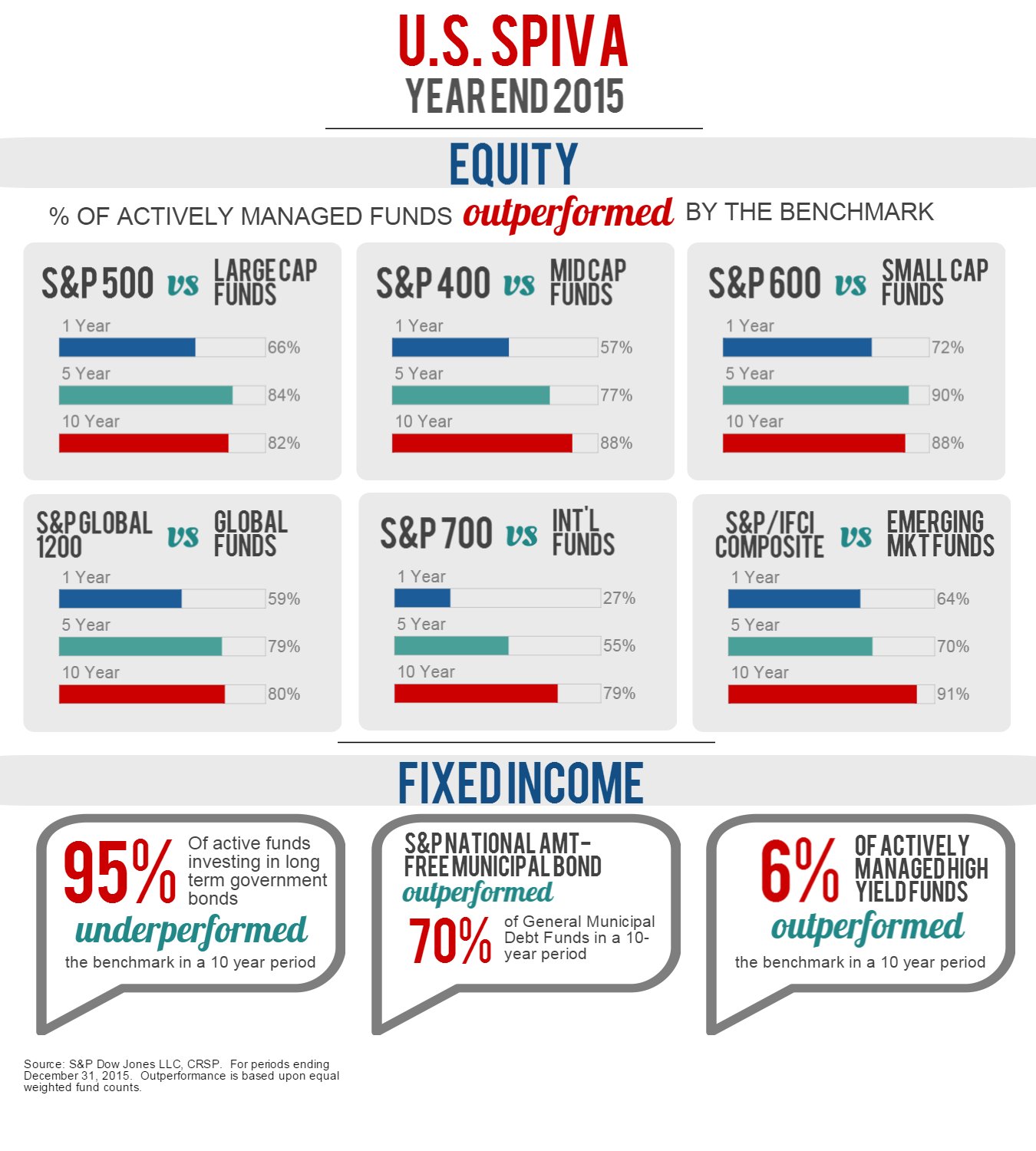 It is pretty clear that all this extra effort spent on picking individual investments and trading has not accomplished the stated goal of beating the market. In effect, the increase in “friction” has only increased fees and, correspondingly, has lowered investors’ returns. More movement often leads to expense ratios that could be classified as being morbidly obese.

How does poor investment returns relate to exercise and weight gain? The answer is a great deal.

A recent article in The Atlantic pointed out the shortcomings of focusing solely on exercise in order to lose weight. Many of these same traits can be applied to investing.

A new study shows that from 1988 to 2006, women more than doubled their frequency of exercise, while men upped theirs by nearly 50 percent. The prevalence of obesity among Americans increased from 23 percent to 35 percent in the same time period.

This stat is very similar to the studies that show how over-trading depletes investment returns. Funds that turnover their assets 200% annually rarely work out well for investors. Trading costs and taxes grossly inflate investor expenses and dramatically reduce returns.

Financial exercise is a great contributor to the underwhelming returns listed above. Amazingly, trading costs are not included in calculating mutual fund fees. Therefore, the stated returns of most actively-managed funds are probably worse!

Most studies show that exercise has a limited effect on weight loss, and it’s far less reliable than watching your diet. Think of exercise as relying on one asset class to achieve an investment goal. Combining diet, proper sleep, exercise, and mental outlook creates a diversified and effective plan for weight loss and optimal health.

The same can be said for mixing and matching stocks, bonds, and cash in moderation based on specific goals.  Savings rates, time frame, low expenses, and personal risk level are also important factors to consider when creating a financial plan. Focusing on one item to the detriment of all the others will often lead to disappointment in retirement investing as well as weight loss.

Monkeys in the wild have been found to burn no more calories than those in zoos. The energy a person uses is not directly tied to how much you move. Massive energy can be devoted to frenetic trading. A better strategy applies a much smaller dose to tax efficiency, asset allocation and fund expenses.

In the end, the latter investor will burn many more fat calories, in the form of reducing fund expenses and increasing returns. The active trader will achieve the opposite. The outward appearance of thousands of trading tickets may look impressive to the uninformed. In reality, this is no different than the monkeys throwing coconuts at each other in the wild.

Growing evidence suggests that our metabolism might even slow down as we lose weight—perhaps because increased activity triggers the body to save calories, so that an energy deficit doesn’t disrupt important bodily functions. This is remarkably similar to the paradox of skill which has happened in both the mutual fund and hedge fund industries.

The level of skill and resources of the main competitors in these fields is now off the charts. This has negated their competitive advantage of past markets when professional managers were often trading against over-matched retail investors. This paradox has leveled the playing field so much that superior performance of fund managers can be largely credited to random luck.

Like the body getting used to exercise and conserving fat, fund managers have hit a plateau where their increased efforts garner fewer and fewer rewards.

Studies have shown processed food is a big component of the obesity epidemic. Most hedge funds and so called “liquid alts” act similarly to high fructose corn syrup effects on the body when added to a portfolio. These high-fee, hyper-active products reduce investor’s cash flow in the same manner bad cholesterol restricts the body’s ability to circulate blood.

To be fair, there are mangers that can beat the indices; the problem is finding them is almost impossible. Identifying a fund manager who will beat the market over the next decade is a task that is similar to finding a needle in a haystack.

We are also all active investors in some respects, because very few portfolios align themselves with a true global allocation matching the world market’s capitalization of stocks and bonds by country. There is a big difference in being smart active as compared to dumb active. Choosing a mixture of index funds representing various asset classes is way different than deciding to become a day trader.

Just like losing weight, investors need to know what to focus upon and have realistic expectations. One small study found that people fresh from the gym overestimated their energy use by up to 400 percent and ate more than twice as many calories as they actually burned.

If investors believe focusing solely on hyperactive trading activity and stock picking will lead to better investment results, they may find themselves in the same place as the guy who walks an hour on a treadmill and comes home and devours four pizzas.

In both cases, the activity will actually make the problem worse. Slow down, create balance, and have realistic expectations. You will wind up a thinner and wealthier person in the end.