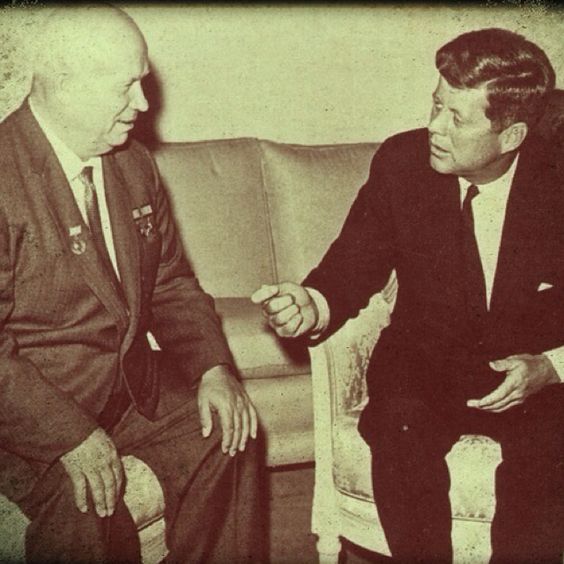 “You know, Mr. Kennedy, we voted for you.”- Soviet Premier, Nikita Khrushchev

The 2016 election may not have been the only U.S. election the Russians may have influenced.

It turns out the 1960 nail-biter between Richard Nixon and John F. Kennedy may have been the scene of some Russian hacking.

You could not find two more polar opposites than John F. Kennedy and Nikita Khrushchev.

The balding, short and overweight Soviet premier was considered to be a “peasant’s peasant.” He had no formal education. In today’s headlines, the accusation of “deplorable” would have been a compliment when looking at his background and rise to power.

Why would Khrushchev have wanted to influence the U.S. election and help a western playboy become president?  He despised Richard Nixon.

From events like the “Kitchen debate” he had with Nixon on the merits of communism vs. capitalism, Khrushchev came to a conclusion.  Being a “reformer” by Soviet standards, (he was not a sadistic, cold-blooded murderer, like Josef Stalin) he actually wanted to improve relations with the west. He felt Kennedy was a “pragmatist.” Kennedy did have the same hardliner attitude Nixon felt towards “The Reds.”

In his memoir, published as “Khrushchev Remembers” in 1970, Khrushchev said he told other members of the Soviet leadership: “If Nixon becomes President, I don’t believe he will contribute to an improvement of relations between our two countries.” Washington Post

Conventional wisdom believed he preferred Kennedy because he thought he was weak. He came to believe this later, but not in 1960.

According to Dan Carlin, Khrushchev gave instructions to his feared secret police, the K.G.B. to “see what they could do” to influence voters to side with Kennedy. Sound familiar?

He also took more concrete actions that were clearly designed to favor the Democratic nominee.

The Soviets held Francis Gary Powers, a U.S. pilot whose U-2 spy plane they had shot down. They were going to put him on trial as a spy. President Eisenhower and Vice President Nixon were negotiating for Powers’ release.

According to Adam Taylor of the Washington Post, Khrushchev wrote in his memoir:” I expressed my opinion to the leadership: The United States Government has asked us to release Powers. Now is not the time to do it.”

Noting that the two candidates were at a “stalemate,” Khrushchev recalled saying that if Powers or the other Americans were released before the election, it could give Nixon a boost. It would be better to wait until after the election, the Soviet premier thought.

“My comrades agreed, and we did not release Powers,” he wrote. “As it turned out, we’d done the right thing. Kennedy won the election by a majority of only 200,000 or so votes, a negligible margin if you consider the huge population of the United States. The slightest nudge either way would have been decisive.”

Many people believe Vladimir Putin had a similar positive effect upon Donald Trump’s surprise victory over Hilary Clinton. Putin viewed Clinton as someone whom he would rather not deal with; though it would be a real stretch to call him a reformer, like Khrushchev.

To paraphrase Mark Twain, history may not repeat itself but it sure does rhyme.