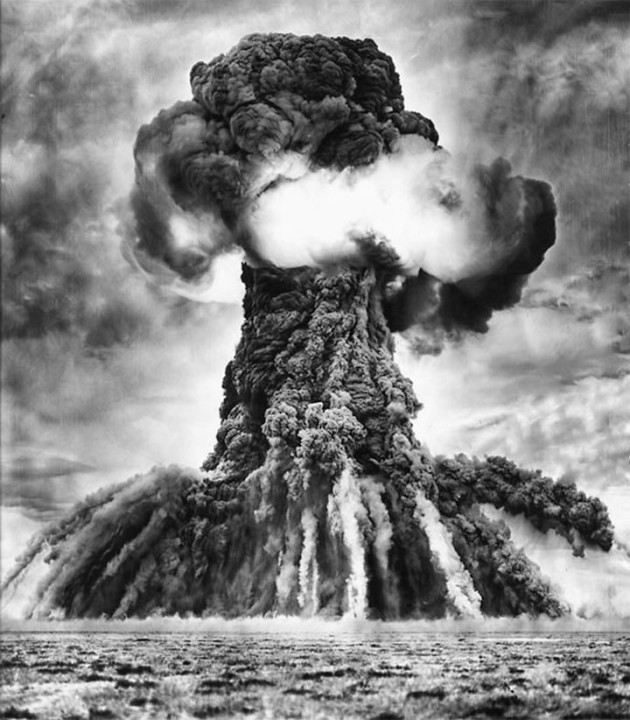 “At a remote test site at Semipalatinsk in Kazakhstan, the USSR successfully detonates its first atomic bomb, code name “First Lightning.” In order to measure the effects of the blast, the Soviet scientists constructed buildings, bridges, and other civilian structures in the vicinity of the bomb. They also placed animals in cages nearby so that they could test the effects of nuclear radiation on human-like mammals. The atomic explosion, which at 20 kilotons was roughly equal to “Trinity,” the first U.S. atomic explosion, destroyed those structures and incinerated the animals.” – The History Channel

Imagine being President Harry Truman; or, as Stalin called him, “that noisy shopkeeper,” on this fateful day. The President had to face shocked Americans and inform them that the U.S. was no longer the only nation with nuclear weapons. There was a decent possibility the cities they were living in could become a charred nuclear wasteland.

Truman had been advised that by the military that the Soviets were “probably a good 15-20 years” away from developing their own A-Bomb. As most forecasts are, this was frighteningly inaccurate.

While many choose to fret about today’s confusing political scene, the things that were being discussed in Truman’s cabinet meetings were considerably more terrifying than any of President Trump’s tweets about Nordstroms, The Apprentice, or a “failing” New York Times.

Some of Truman’s military advisors were seriously considering a preemptive strike on the Soviets before the small window of opportunity was closed. They believed why not strike now when we held a royal flush of being the only nuclear super power? There might never be another time where the U.S. held such a formidable military advantage.

Choosing the time, place and terms of military confrontation slants the battlefield toward the side that has power of these terms.

While we might recoil in horror at this strategy, was it that far-fetched? What would Hannibal, Napoleon, Alexander The Great or Genghis Khan have done if they held such an advantage over their opponents? Human nature is not always merciful.

The Soviets were considered to be an enemy more evil than Hitler’s Nazis.

After World War II, the U.S. greatly downsized their military while Soviet’s Red Army did not. Our one deterrent from letting the Soviet’s impose their will on Western Europe was the bomb.

The Red Army’s numerical advantage was considerable. Truman asked one of his Generals, “What would the Red Army need to advance into Switzerland?” His reply was terrifying: “shoes.”

Unleashing a nuclear hell upon the Soviets and “bombing them back into the stone age” was on the table. The fact this was a viable option  tells of the extreme state of uncertainty and horror of these times.

In the words of Dan Carlin,”This was a three dimensional chess match with a board that was booby trapped with nuclear weapons and nobody knows where they are.”

Many scientists who helped create these weapons were terrified about what they had done.

Robert Oppenheimer, the lead physicist for the Manhattan Project which created the atomic bomb, understood what he had unleashed upon the world.

He visited Truman  in a state of anguish after we nuked the Japanese cities of Hiroshima and Nagasaki in 1945.

He said to Truman, “I have blood on my hands.”

Truman reportedly replied, “Never bring that fu@k!n cretin in here again! He didn’t drop the bomb, I did.”

These were the times they lived in.

While today’s politics may seem tumultuous and tense, they pale before these dark days of the Cold War.  Just imagine if today you saw this on “Science Twitter” from the world’s most brilliant physicist.

Oppenheimer stated the unthinkable.  “Now I am become death, the destroyer of worlds.”