High-cost, prestigious universities may be a waste of money.

There is one caveat. You better like math and science!

The Wall Street Journal published a fascinating article that highlighted some interesting observations.

Eric Eide and Michael Hilmer point out: “Diplomas from prestigious schools boost future earnings only in certain fields, while in other fields they simply don’t make a difference.”

While business and liberal arts majors gain enormous future earnings benefits from prestigious schools, the same cannot be said for science and math. According to the authors, “For fields like science, technology, engineering and math, it largely doesn’t matter whether students go to a prestigious, expensive school or a low-priced one—expected earnings turn out the same. So, families may be wasting money by chasing an expensive diploma in those fields.”

In other words, students can avoid huge amounts of debt and end up with the same post graduation salary in a STEM job by choosing the less expensive, lesser known school.

To quote Jack Bogle, “You get what you don’t pay for.”

According to the authors:  “…if an engineering student chose to attend the University of Pennsylvania instead of Texas A&M, the average starting salary would differ by less than $1,000, but the tuition difference would be over $167,000. At that slightly higher salary, you’d have to work for more than 150 years before you make up for that vast tuition difference.”

This is not true for business and social science graduates. They can end up earning between 11-18% more by attending the prestigious school rather than a less selective college.

To motivate your children to pursue a STEM degree at a lesser known and cheaper school, you might want to throw this at them.

They may end up earning more in their career than the average NFL, NBA or MLB professional athlete! 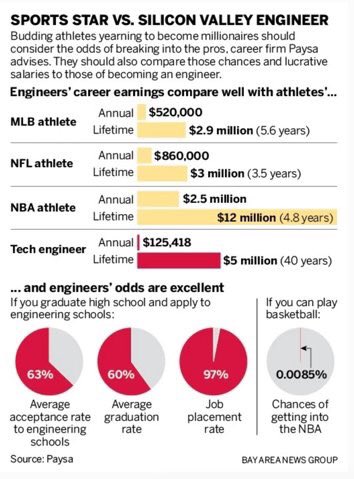 The odds are enormous that STEM grads will find a job in their chosen field and, over their working career,  out-earn the same people they watch on ESPN.

Maybe sending your kids to coding camp instead of “speed school” would be a much wiser use of limited family funds.

In the end we do not always get what we pay for. This goes for choosing a college and a career path. Having a plan that is based on evidence, rather than emotion or hearsay from friends and family, is the right choice regarding anything that has to do with spending large amounts of money.

A career in science or math can provide many benefits to society and the individuals who have a passion for STEM.

Who would have thought an additional perk could be a 50% discount on tuition.