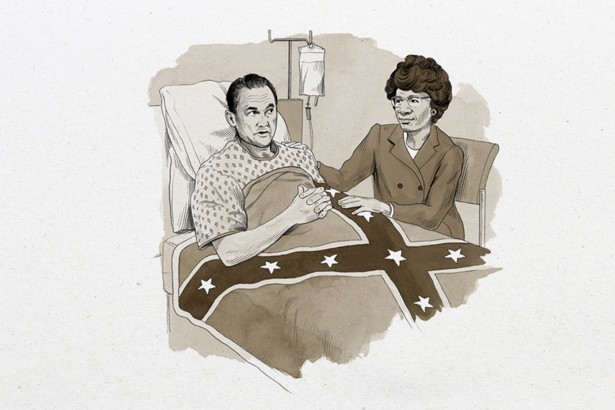 “Hell, I never vote for anybody, I always vote against.”  – W.C. Fields

The American people are in dire need of “Change We Can Believe In”.  It is quite obvious; the majority of Americans detest both political candidates.

We will have change in 2016; the belief part is a whole other story.

The partisans of both sides do nothing but inflame this already combustible scenario.  Many voters concur with what Henry Kissinger once said about the Iraq/Iran war, “It’s a pity both sides can’t lose.”

This sums up the depressed mood of a beleaguered electorate.

It does not have to be this way. As usual, we can look to the past for some inspiration.

We can find a message of hope in the interaction between two political candidates on the complete extremities of the political spectrum, almost 50 years ago.

Shirley Chisholm, the first African American to run for our nation’s highest office, and the white southerner and segregationist, George Wallace, composed the oddest of couples.

During the 1972 presidential race, Wallace was shot at point blank range by an attempted assassin.

Though Wallace gained notoriety for once stating, “Segregation now, segregation tomorrow and segregation forever,” Chisholm did something that shocked the nation.

According to The Atlantic, ”She visited Wallace in the hospital to express her concern and sympathy.”

What Chisholm said about her decision to show compassion and empathy toward her bitter rival leaves some clues about how our viciously divided nation can heal itself.

Chisholm believed in something that is very much lacking in our increasingly vulgar political arena.

Chisholm wanted to convey, in part, her belief that it was important in a democracy to respect contrary opinions without “impugning the motives” and “maligning the character” of one’s opponents. To view it any other way, Chisholm argued, was to encourage “the same sickness in public life that leads to assassinations.”

Hopefully, people will look back at this little known event and learn a thing or two about class and humanity.

We swim in the polluted political waters of lies, deception, racism, misogyny, and sexual infidelities of today’s sad contest.

Maybe we should all step back and take a deep breath and learn something about the difference between power and greatness.

We could all observe much from this woman born of immigrant parents from the Caribbean.

Though she never came remotely close to the presidency, she left a lasting mark on society.

As today’s candidates attack each other and their “deplorable” followers, Ms. Chisholm’s words and deeds tower ever higher.

“Making America Great Again” is an empty slogan if one cannot understand that there are two sides to every story. The answer is usually found somewhere in the middle.

Though somebody will win this election and become the most powerful leader on the planet, I doubt they will ever achieve the greatness of Ms. Chisholm’s simple act of humanity.