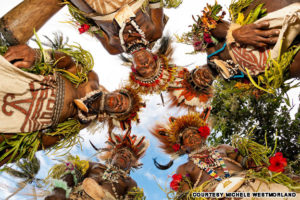 s who churned $2 million dollars’ worth of commissions in a single household over 3.5 years! Chinese Internet and Papa New Guinea energy companies acting as huge components of a 70-year old couple’s retirement plan! There is good reason why some call the retail brokerage world a “Gangsta’s  Paradise”.

According to The Wall Street Journal, an arbitration panel ordered Morgan Stanley to pay about $8.6 million to a retiree for losses tied to unauthorized trading and unsuitable investments.

It seemed these advisors were very bullish on individual emerging market equities, especially for their elderly clients.  At one point, Chinese internet company, NQ Mobile, represented 18% of this elderly couple’s portfolio! This was just the warm-up to the next stage of this debacle.

The accounts were “rebalanced” and lo and behold, a Papua New Guinea energy company ended up being an astounding 43% of their new holdings. Never mind the fact that nearly 40% of this nation’s population of 8 million people live a “self-sustainable” lifestyle and have no access to investment capital.

In other words, they are dirt poor. I am sure Morgan Stanley was just being altruistic and wanted to provide funds for this developing country to grow and prosper. One could say a brokerage version of UNICEF sans the Halloween collection boxes

A cynic might counter the higher motivation was the $2 million these trades generated for the firm.   The nerve of this retired couple’s son to question Morgan Stanley’s charitable motives and investigate what was going on with his elderly parents’ retirement account!

Morgan Stanley has a pretty novel defense to these claims.  According to them, people are looking at this entirely wrong.  They state this damage award “ignores the actual performance of the subject accounts in favor of speculation to what the account should have done.”

According to their thinking, even though this portfolio was bat sh*t crazy, the couple did not lose all of their money.  According to this deranged thought process, we cannot look at the situation of what they potentially could have lost, let’s just look at what they actually lost.

This would be analogous to attempting to light someone’s house on fire but being thwarted by firemen. “The house had nine rooms and only the garage was left in ashes. No harm no foul.”

We come across pretty crazy stuff when new clients submit their statements to transfer their funds. In the last couple of months I have seen an IRA account with 43 different mutual funds.

In another example, a 401(K) account was found to have about 12 different MLPs. It also included several MLP ETFs that included these same securities! Add in a splash of small-cap South Korean stocks and a pinch of the consumer discretionary sector with Panera Bread holding and you have the makings of a recipe for disaster.

However, with its horrifically inappropriate exposure to some of the most risky and volatile stocks on the face of this planet, this elderly couple’s portfolio takes the cake.

What is even worse is that Morgan Stanley is actually trying to defend the indefensible.  Here lies the problem:  Instead of admitting to blatant wrong doing, a good portion of the industry prefers to live in a state of denial.

A recent lawsuit was filed to overturn or delay the newly imposed Fiduciary Rule, initiated by the Department of Labor (“DOL”). This law is designed to prevent the elderly from owning Chinese internet stocks and paying return-destroying, unnecessary sales commissions.

My friend, Scott Dauenhauer ,calls out those who oppose basic investor protections in his post,  Here are 10 Organizations That Don’t Give A Shit About You.

These groups are against advisors looking out for their client’s best interests and need to be outed for putting profits ahead of human decency.

In fact, these organizations need to be shunned (ala Dwight Schrute of The Office).  His immortal words apply to those who oppose looking out for clients’ best interests.

“Yes, I have decided to shun Andy Bernard for the next three years. It’s an Amish technique. It’s like slapping someone with silence. I was shunned from the age of four until my sixth birthday… for not saving the excess oil from a can of tuna.”

Seriously, in the words of Michael Kitces, “100% of organizations suing the DOL over fiduciary responsibility represent product manufacturers and distributors.”

Unfortunately, we will continue to see car wrecks like those listed above until we have a strong rule that requires ALL advisors in ALL accounts to do the right thing for their clients.

Maybe the solution for this problem can be found in Ancient Rome. Roman engineers were forced to sleep under the bridges they built. This was Caesar’s way of making his advisors ate their own cooking.

The organizations and individual firms who fight these rules and defend their advisors should be required to manage their parents’ and grandparents’ portfolios in the same manner.

“Granny needs some Canadian small-cap gold miners, pink-sheet securities and a dash of bitcoin. After all, as long as she doesn’t lose all of her money, the risk was worth it.”

Something tells me these firms just might change their tune if their advisors had to pay the costs of Grandpa’s nursing home because his retirement account was smoked.

Large fines might discourage some of this behavior.  Unfortunately it is hard to legislate morality.

Maybe firms that abuse the elderly and fight investor protections should listen to the words of the high priest of capitalism himself, J.P. Morgan.

Morgan stated to Congress in 1912, “Before money or anything else. Money cannot buy it….because a man I do not trust could not get money from me on all the bonds in Christendom.”

Morgan Stanley and others should keep this in mind the next time they create a murder hole out of someone’s retirement account in order to generate commissions.