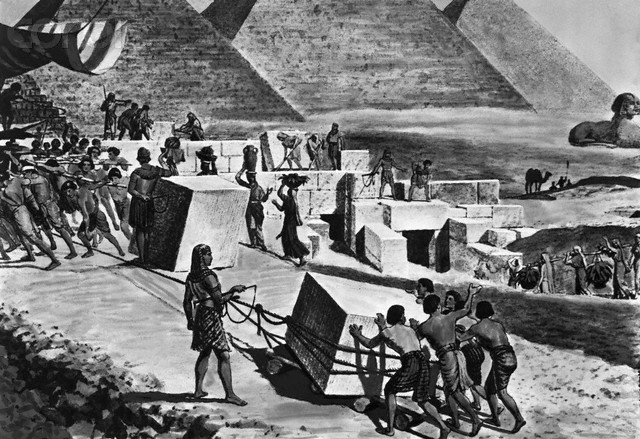 The Scientific Revolution changed everything. After the year 1500, progress became a word that dominated the conversation. Trust in the people and ideas suddenly became cool. The foreign concept that the future would be better than the present began to take hold.

Before science and the admission of ignorance became commonplace, business resembled a zero-sum game, i.e., business profit was always made at someone else’s expense.  This belief was ingrained as fact in the minds of early investors.

This stagnant pie mentality held back progress and created a culture of limited wealth because individuals will only lend money if they believe the economic pie will expand. Without the potential for expansion, it made more sense for individuals to hold onto their money and purchase baubles or plow it into an unproductive enterprise.

Look at the behavior of ancient Egyptian Pharaohs and Medieval Noblemen: They sunk their fortunes into pyramids, lavish banquets, tournaments, palaces, and wars. Yuval Harari gives some great examples in his best-selling book, Sapiens.

The idea of investing in their slaves or serf’s productivity was unthinkable. Financing a new business was out of the question. Why would anyone do this if the dominating theme was things will only get worse or, at best, stay at the prevailing status quo?

In the words of Harari, “Credit is the difference between today’s pie and tomorrow’s pie. If the pie stays the same, why extend credit?” Since the foundation of credit is based upon trust, it is not hard to figure out why lending was very scarce or for very short time periods at high interest rates.

This is also where capitalism got its bad name. Since any creditor during these times was basically a Pay Day Lender, it is not a stretch of the imagination why Jesus’ view of wealth was something less than favorable. According to Harrari, “if the pie is static, and I have a big part of it, then I must have taken somebody else’s slice.” Many cultures came to the logical conclusion that making boatloads of dough was the work of Satan.

This thought pattern created a negative feedback economic loop. No credit led to little or no business creation. The lack of new businesses impeded economic growth. This pattern was assumed to last indefinitely. This self-fulfilling prophecy of negativity took hold, and civilization became a pretty dreary and depressing place.

The Scientific Revolution changed all of this. Geographical discoveries and technological inventions destroyed the old argument that new wealth could not be created; only redistributed. Lending money became more common place. The creation of the joint stock company provided a way to share risk and most of civilization were off to the races.

This brings us to today. It is amazing that we still have people called “Gold Bugs.” These are individuals who store the majority of their wealth in things like Gold Bars and silver coins. Essentially, they are investing like the medieval nobles who had no faith in human progress. While the nobles had little evidence that things would get better, modern investors have reams of it. The progress that has been accomplished solely by human ingenuity since the year 1500 is breathtaking. While castle dwellers used their dogs as napkins (yes, that is true) kids today have a camera, phone, and T.V. in a device smaller than a Twinkie!

There is a reason capitalism is called capitalism. In the words of Harari, “Capitalism distinguishes capital from mere wealth. Capital consists of money, goods, and resources that are invested in production. Wealth, on the other hand, is buried in the ground or wasted on unproductive activities.”

Gold bars and silver coins fall under this category. Gold Bugs are not capitalists. An employee who contributes to a 401(k) is investing in human progress, not betting on a medieval future of plague, pestilence, slavery and war.

While there is nothing wrong with allocating a small portion of a portfolio to this “barbarous relic,” too many people believe the prophets of doom who prey on their fears.  Making a large bet against human progress has failed miserably for the last 500 years.

Everyone has a right to his/her own opinion. Just understand that placing all of your wealth in gold bullion is making an apocalyptic bet on the future. A key to investing success is knowing what you own and why you own it.  If this is your view, go for it.

Falling prey to this medieval mindset is not advisable. In the words of Warren Buffet (who, by the way, does not invest in gold), “It’s never paid to bet against America. We come through things, but it’s not always a smooth ride.”

This goes doubly so for human progress. While an Egyptian Pharaoh or Medieval Noble did not know any better, what is your excuse?