It’s a small world, after all.

For too many retirees, this is their reality.

Unfortunately, some of the problems are self-induced.

My colleague, Nick Maggiulli, wrote a terrific post on this subject.

Relationships more than money determine the quality of life for retirees.

Robert Waldinger confirmed this point in a TED talk: When we gathered together everything we knew about them about at age 50, it wasn’t their middle-age cholesterol levels that predicted how they were going to grow old. It was how satisfied they were in their relationships. The people who were the most confident in their relationships at age 50 were the healthiest at age 80.

Too many spend a disproportionate amount of time alone during our supposed golden years.

Loneliness is partially due to the age-related deaths of friends and family. 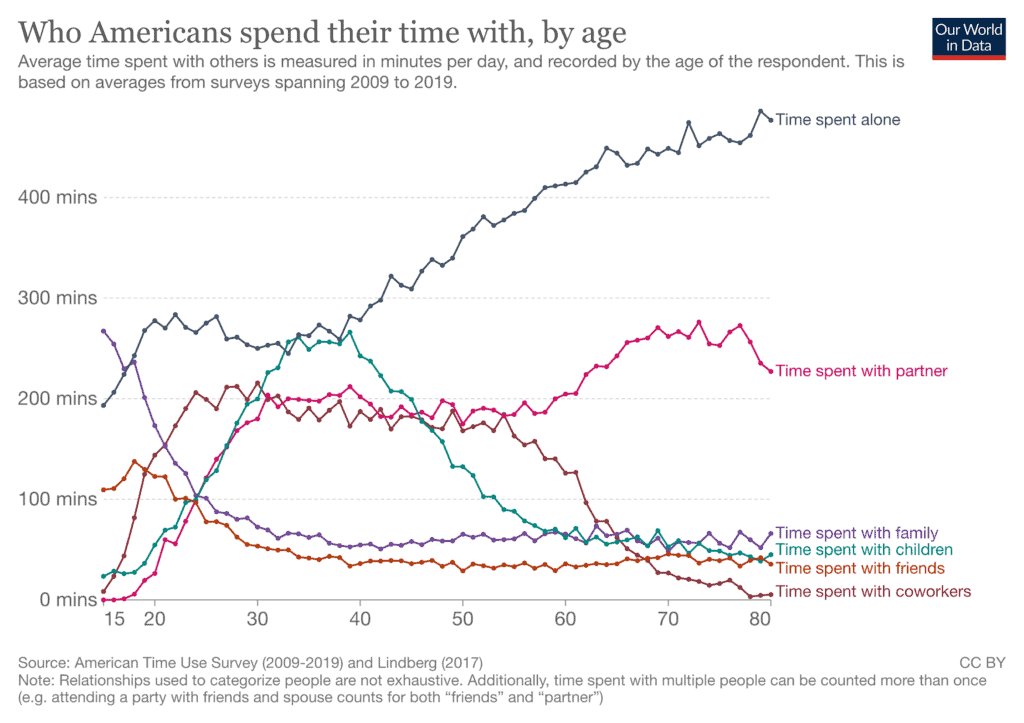 Limited longevity isn’t the only cause of elderly loneliness.

Now isn’t the time for taking a foot off the empathy brake.

Watching political shows 24/7 and listening to incendiary talk radio is a prime culprit.

Predatory misinformation has no shame.

Millions of retirees exclude most of the free world from their echo chambers, spending dwindling time and energy venting anger toward the following:

Nobody’s saying you need to be Ted Lasso but C’Mon Man!

The issue is bi-partisan in its toxicity.

Shunning the majority of your fellow citizens because your belief system borders on sociopathy.

Other angry people with the same intolerant attitudes?

It’s one thing when your world becomes smaller due to the laws of nature.

It’s something else when unhelpful attitudes and actions propel shrinkage.

This behavior repels those on the fringes of your reality-challenged borders.

Some people disown their own families due to political beliefs.

Do retirees realize their children have much in common with their bogey men?

Add conspiracy theories to the mix, and it’s a perfect storm, metastasizing bitterness and rage.

Doing it alone is a path to misery.

Open up your social universe to differing viewpoints.

When did it become a requirement that being friends with someone requires 100% allegiance to all of your opinions?

The good news  – It’s never too late for change.

Holding a biased opinion upon EVERYTHING isn’t optimal.

A shrinking seething world should never be a part of a goals-based financial plan.