Do you know one fact about our 19th President, Rutherford B. Hayes?

Don’t count on this continuing. For those of you aren’t History nerds like myself, here’s why RBH’s name might be a conversation starter during the next few months.

In 1876, Hayes ran for president against the Democratic candidate, Samuel Tilden. Tilden emerged with a lead of 260,000 popular votes but only garnered 184 electoral votes – One short of victory.

In three states, Louisiana, Florida, and South Carolina, both sides declared themselves triumphant. The verdict shifted to a split Congress.  Democrats controlling the House, while the Republicans held the Senate.

A commission ended up awarding Hayes all three contested states. The Republicans won the election by one electoral vote. 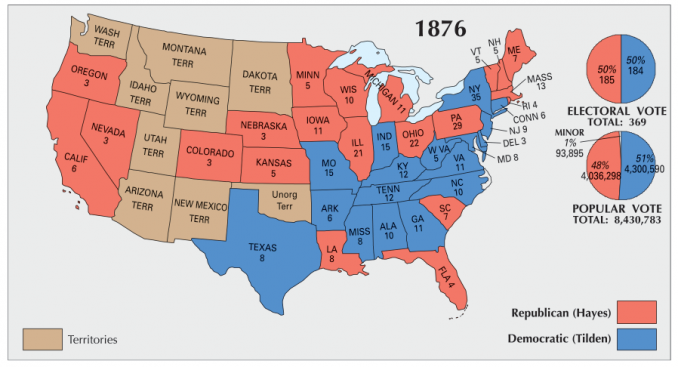 What became known as the Compromise of 1877 immeasurably changed the nation for the worse during the next century.

The resulting devastation for African-Americans was a crime against humanity. The aftershocks are still felt in 2020.

In a backroom deal, Republicans pledged to pull the Union Army from the South, ceding the region’s control to local institutions.  The price for Democratic support was steep.

All the progress of the Reconstruction Era disintegrated. The KKK rose again, and Jim Crow Laws sprang to life. Jim Crow created horrific inequities impoverishing generations of African-Africans. Relief didn’t arrive until the Civil Rights movement of the 1960s.

If the 2020 election ends in a tie, could something like this happen again?

Like Voltaire once said, “History never repeats itself, man always does.”

It’s improbable such an infringement of  Civil Rights is possible in modern times.

A backroom deal to secure the Presidency is another story.

Who knows what the consequences of that scenario might be?

Remember this in a year filled with Plague, Murder Hornets, and Double Hurricanes.

Will the coming election be a disaster of epic proportions resulting in a constitutional crisis and stock market meltdown?

“The election won’t be decided for months, causing chaos and anarchy in the streets.”

Some believe a second civil war will result!

Let’s all calm down and look at the facts.

Goldman Sach’s threw a bucket of cold water on the idea of an undecided election and months of chaos in the streets.

“There should be enough information on Election Night from states that will report quickly” to know who the likely winner will be, even before the Associated Press or others pronounce the victor. “In other words, the S&P can trade the likely outcome even if the AP does not call the race,” they declared.

Shockingly,  Florida, the epicenter of the 2000 election fiasco and the infamous hanging chads, doesn’t seem to be an impending disaster.

The Sunshine State will begin counting early votes 22 days before November 3 and won’t accept any more ballots after Election Day. The Goldman economists wrote that “nearly all scenarios in which President Trump reaches an electoral college majority includes Florida’s 27 electoral votes.” A Florida win should come early and tell the tale for the rest of the contest.

Florida saves the day, but we’re still not giving the all-clear signal.

“OK fine, but the markets are still going to crash, and I am going to cash two days before the election.”

Not so fast, according to my colleague Blair Duquesnay.

Blair took a look at the controversial 2000.election. President Bush didn’t officially claim victory until December 12. The market went down a little over 3% during the tumult. In 2020 terms, that qualifies as a big yawn.

To put the markets in 2000 in context, remember that the burst of the dotcom bubble began in March of that year by the end of 2002, the NASDAQ composite was -72% from its highs. The S&P 500 Index was down -36%. In the chart below, the time between election day and decision day is unrecognizable. 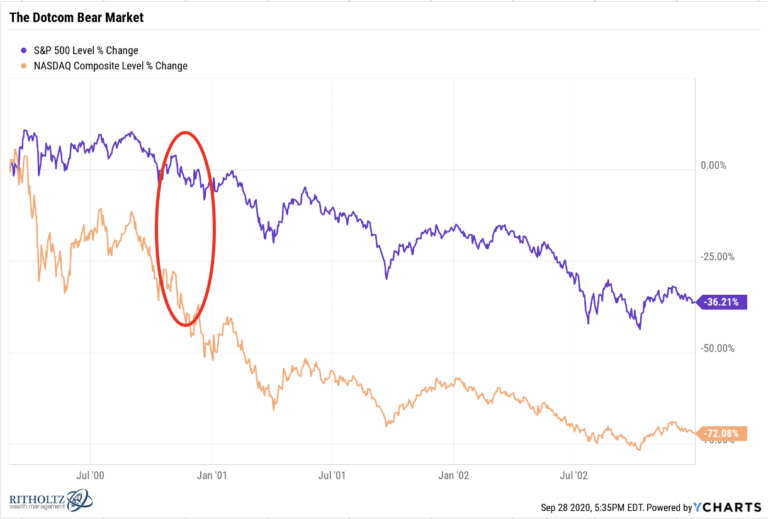 We abhor uncertainty. It’s hard to plan for the unknown. Its easier to believe any story, no matter how absurd.

Why? It’s a better option than no story at all. A trip to crazy town is preferable to  – I don’t know.

Rutherford B Hayes got somewhat of a bad rap in the Compromise of 1877, but his words may prove to be prophetic. 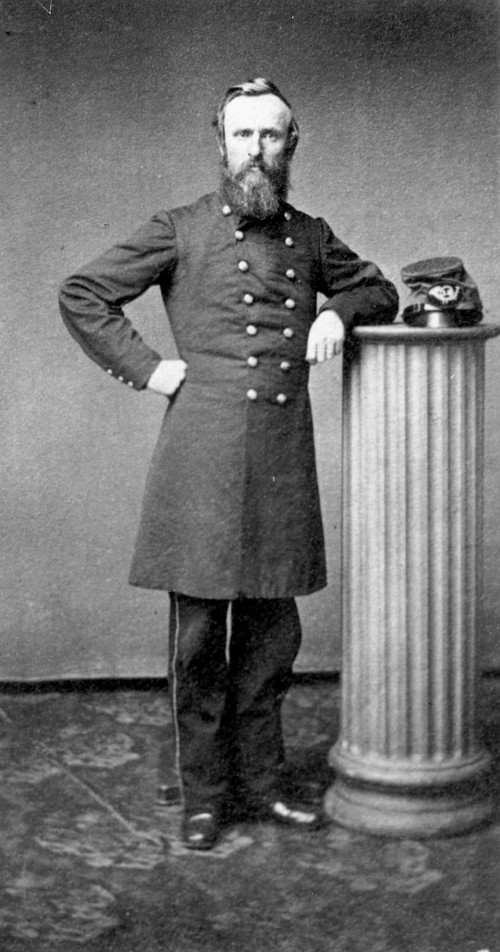 Hayes was a Northern Civil War hero. As a Congressman, he voted for the 14th amendment. When running for Governor in Ohio, he proposed a state constitutional amendment giving the right to vote to black men.

During his Presidency, he vetoed three attempts by Congress to repeal laws forbidding racial voter suppression but faced ferocious opposition from segregationist Democrats.

Instead of worrying about the 2020 election, we should be concerned about something Hayes warned about back in 1893.

“Free government cannot long endure if the property is largely in a few hands and large masses of people are unable to earn homes, education, and support in old age.”

Hopefully, Hayes’s role in history is something other than another election debacle.

We’ll have our answer pretty soon.