Who knew the late Tom Petty was a college financial aid expert?

The waiting is the hardest part  -when it comes to filling out FAFSA forms.

On October 1, the great race commenced for financial and merit aid for college. Parents and students began filling out the Free Application for Federal Student Aid, or FAFSA form.

Last year, more than 18 million Americans took advantage of this offer – but that’s not nearly enough.

Too many never fill out FAFSA, mistakenly believing they’re not eligible. In a shocking study, The National College Access Network determined less than 50% of graduating high school students end up applying for aid.

Many parents don’t apply, erroneously believing their incomes disqualify them from eligibility.

This ill-advised decision automatically makes students ineligible for merit aid and low-cost government college loans, The eligibility for either of these forms of assistance has nothing to do with income.

All students are eligible for unsubsidized Stafford loans.

Merit aid is based on unique abilities like academics, sports, or artistic talent – not income.

No FAFSA, No merit aid.

Elizabeth Myong recently wrote in CNBC about a family whose income was north of $350,000. They received aid because three children were simultaneously attending college.

In fact according to Myong,

During the 2017-2018 school year, the average amount of aid for each full-time equivalent student was $14,796, according to the College Board. Of that amount, grant aid accounted for $8,974.

Nerd Wallet determined in 2017 that $2.3 billion in federal aid was forfeited because parents and students neglected to fill out the forms.

The next worst strategy to doing nothing regarding FAFSA is waiting too long before filling them out.

Many states and colleges have policies based on a first-come, first-serve philosophy.

Many states and colleges use the FAFSA to determine eligibility for nonfederal student aid funds that may have early deadlines or limited funding. The sooner you complete the FAFSA the more aid you could be eligible for.

There is a big difference between loans and grants. The explosion in student debt tells this ugly tale. 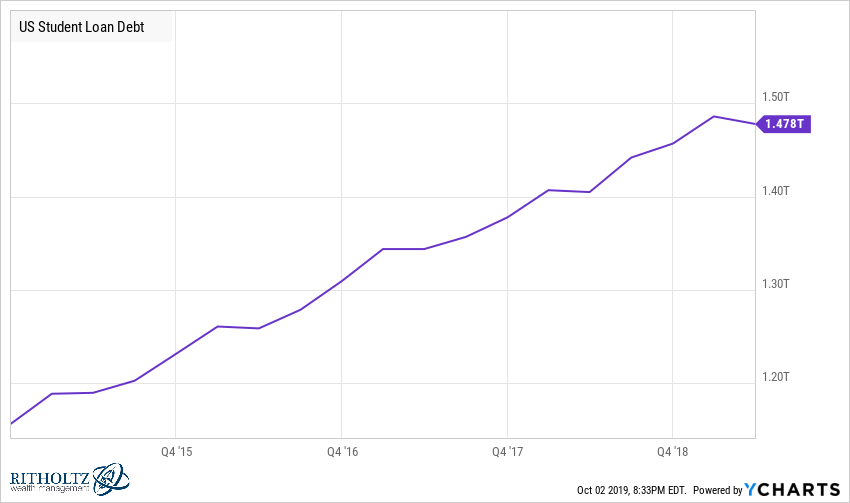 You don’t need to repay the latter. Waiting on FAFSA increases chances the grant well will run dry before getting a chance to drink from it.

Finally, the benefits of an early application are erased by making data errors on the financial aid forms.

Three of the most common errors are:

In addition to these common errors, many don’t complete the entire form. don’t use the correct website or fail to report required information.

FAFSA avoidance is quickly becoming the college aid version of not contributing to a 401(k) that includes a matching employer contribution.

Leaving free money on the table is never a good idea.

Unfortunately, millions of Americans forfeit the benefits of low-interest loans and merit aid. This is due to a lack of basic knowledge about how the financial aid system works.

The scariest part of October are not market crashes or Halloween movies.

Not filling out FAFSA is much more terrifying.

What are you waiting for?

Get yourself an FSA ID so you can fill these forms out online and get started right now.