Dead people don’t get to retire.

Many Americans fret about their “retirement number.” They’re missing the big picture. Without health, worrying about wealth becomes a meaningless time suck.

Americans are getting fatter by the second.

The current crisis is heightening the need for better treatment of obesity, but the problem has been growing more severe for years. New federal data show that the obesity rate in the U.S. has hit 42.4%, up from 30.5% in 1999-2000. And many of those affected are in minority groups and underserved populations with limited access to care.

Excess fat is a lethal killer. Covid-19 provides another example. The disease kicks our immune system into a hyperactive state, making the inflammation that’s already present in the bodies of the obese that much more deadly.

There’s no all-clear signal for those suffering from obesity when a vaccine emerges. 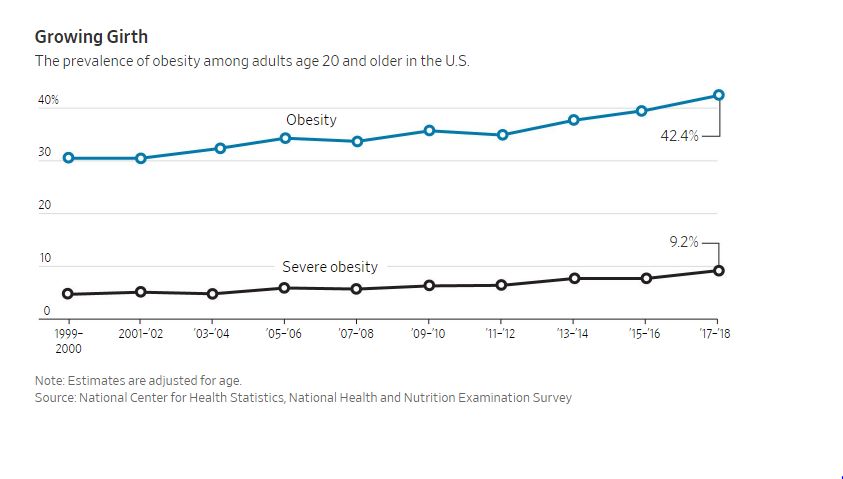 Our bodies slow their metabolism and release hormones to stimulate the appetite.  Further complicating matters, some people possess specific genes making weight loss that much harder.

There aren’t many doctors trained in implementing an evidence-based treatment program dealing with these complex variables.

A psychological component is often the root cause of many eating disorders.

The results of this lack of proper treatment protocols speak for themselves.

What does this have to do with saving for retirement?

For instance, shaming obese people is a poor strategy for getting them to change.  The same goes for money issues. Often there are deep psychological issues why people overspend and neglect saving.

Maybe a stingy parent or deprived childhood had something to do with it? Who Knows?

Telling people to spend less and save more doesn’t work without addressing the multitude of variables that accompany lousy decision making.

Just like obesity, bad saving habits don’t develop overnight. They occur over decades and won’t disappear with a few words of “tough love.”

How about conquering the former but not controlling the latter?

Unhealthy millionaires have their own issues.

Death from obesity-related disease doesn’t discriminate based on the size of your portfolio.

The effects on retirement happiness are devastating.

Money doesn’t buy joy. They just put people on a hedonistic treadmill waiting to get their next temporary fix. Rinse and repeat.

Traveling and being physically active by doing things like playing with grandchildren provide the greatest joy.

Carrying too much excess weight makes these movements impossible.

It’s hard to imagine a more significant threat to retirement than sudden death or a severely limited lifestyle.

Somehow, someway, people need to reverse this trend. Most cannot rely on their willpower and need professional help.

Don’t give up hope.

Listen to the wise words of my friend Phil Pearlman.

Those who make a lifestyle of eating healthy earn crazy short and long term returns with negative correlation to Waistline Momentum and the Great American Sugar Mania.

The food we ingest fuels our engine and serves as the continuous rebuilding material for the only body we ever get. It supersedes exercise programs and, in many cases, medication.

You can add a million-dollar portfolio to the list.