The only group that hates fireworks more than myself are the poor dogs they torture.

The pandemic’s version of July 4th was especially disturbing. Due to the C0vid-19 lockdown, celebrants took their burning desires and turned them up a notch.

It sounded like the Battle of Britain was raging above my house.

The aerial show reminded me of the fireworks story my Uncle told me when I was a kid. He was a Sargeant in the Highway Patrol unit of the NYPD.  Escorting presidents like George W. Bush, and Bill Clinton during their motorcades through the city was a cool part of his job. (He’s the guy in the middle.) 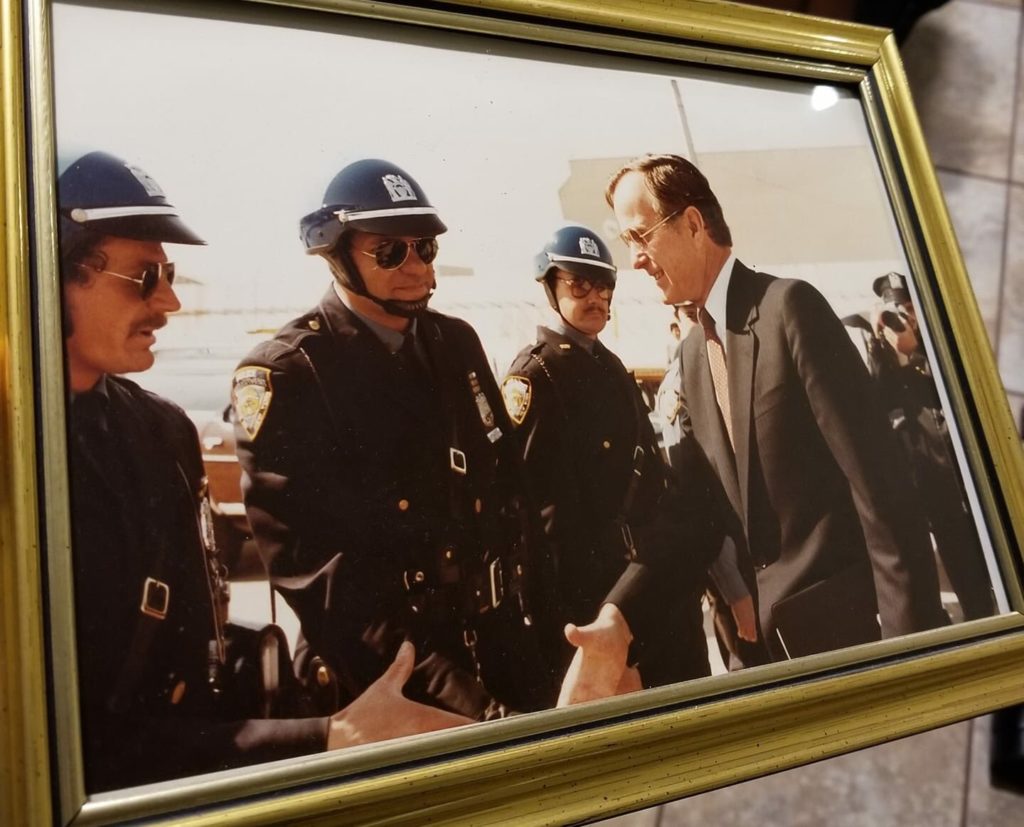 He lived with his family in Ozone Park, Queens. The hangout of deceased mobster John Gotti. Gotti’s brother lived just a couple of doors down. Every July 4th, John Gotti would sponsor a massive fireworks show and B.B.Q. for the neighborhood. Many of his neighbors thought this was great. They were grateful for the “free” holiday party.

Here’s a  description of the crowd’s euphoria for the Don from a 1989 New York Times piece.

This year, the party was more than a party. It was a street drama. Defying strict police orders not to use fireworks, men on rooftops lighted up the skies with rockets and starbursts. Below them, 3,000 people chanted and cheered. And when Mr. Gotti emerged from the heavily guarded club at 9:45 P.M. and waved to the crowd, the cheers got louder.

”Gotti! Gotti! Gotti!” hundreds cheered as the sky exploded. “You’re the greatest!” someone called out.

My Uncle looked at these people with disdain. Being in law enforcement, he knew the exact price of the “free” hot dogs. Despite being a solidly middle-class community, Ozone Park’s stores charged some of the highest rates in the city.

“All of these stores have to pay protection money to Gotti’s crew. To finance this, they mark up the prices.”

The residents were paying a premium for everything from sneakers to Chinese food due to mob extortion. One Chinese restaurant refused to pay, and they blew the place up not once but three times!

My Uncle continued, “Those free hot dogs were the most expensive meals these people ever ate. They just didn’t know it.”

They fell for the sizzle, not the steak.

Luring clients with expensive false promises into buying expensive investments is a feature, not a bug of the industry. Insurance companies are masters of this technique, Serving “a free dinner” as part of an invite to designed to sell senior investors “safe “ annuity products.

Lots of jargon and fairy tales of no risk and high return investments are a large part of the main course.

This information hides in a 500-page prospectus written in legalese by company lawyers. This document protects the insurance company, not their clients.

The S.E.C. published an investor alert warning of the dangers of this tactic.

They include the dangers of:

Promises of High Returns with Little or No Risk

The pressure to Buy Quickly

In Ozone Park, there were no fancy graphs or confusing contracts. The combination of hotdogs, fireworks, and the threat of violence did the trick.

In many ways, these insurance companies are doing the same thing.

In the words of the fictionary mobster, Don Vito Corleone, “lawyers can steal more money with a briefcase than a thousand men with guns and masks.”

If you don’t believe me, try deciphering an annuity prospectus.

Take our advice, skipping the “free” Chicken Marsala is the best investment you’ll ever make.