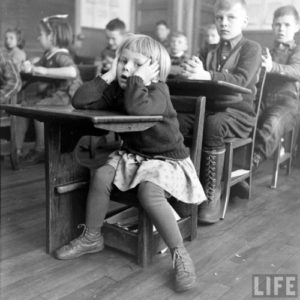 Do you remember anything from your seventh grade math class? Imagine if instead of learning about the area of a rhombus, the stakes were much higher.

If your financial future depended on your memory of your high school curriculum, save the formalities and declare immediate bankruptcy; it would be faster and less painful.

Yet time and time again, children are taught concepts out of context and without relevance.  Is it any wonder that nobody seems to know nuthin’?

My colleague, Barry Ritholtz, pointed out some of these disastrous results in a terrific column last week. He rightly stated despite the best efforts of community, employer, credit, and school-based financial literacy programs, they don’t work.

In other words, studies have shown that individuals who have received no formal financial literacy education seem to know as much (or as little) as those who have gone through an organized educational process.

How do we go about changing this ineffective system?

It turns out teaching students more basic math is an excellent antidote to the plague of financial illiteracy.

According to Charlie Wells, author of “The Smart Way to Teach Children about Money” (The Wall Street Journal), a recent study may have found the answer to this perplexing question:

“Students required by states to take additional math courses practiced better credit management than other students, had a greater percentage of investment income as part of their total income, reported $3,000 higher home equity, and were better able to avoid both home foreclosure and credit-card delinquency.”

In other words do not put the cart before the horse. If a student cannot calculate basic multiplication and division, teaching him about mortgages or compound interest will likely be ineffective.

In addition, most financial disasters occur when people let their volatile and irrational emotions play a major part in their decision-making process.

Adding math skills will help negate some of the emotion and help teach people to think and understand the positive ramifications of long- term savings and the negative consequences of debt accumulation.

Smart financial management skills do not require advanced calculus or statistic courses. These traits can be developed with a more intensive approach on focusing on basic mathematics.

In addition to more math courses in school, parents can help at home.

Unfortunately, many parents refuse to discuss money at the dinner table. According to Lynsey Romo, an assistant professor at North Carolina State University,” Even now, parents talk more about sex with their children than they do about money.”

Often parents do not want to create anxiety in their children. Some believe this topic is impolite. In the end, according to Wells, “These secrets often cause more anxiety than telling the truth.”

If children do not receive truthful answers about money, they will develop very superficial and inaccurate views regarding their finances.

If money is stressed by their parents to be the omnipotent answer to all of their problems, bad social behaviors will often result.

For example, they may learn to believe money is the way to become popular. They may also learn that their self-worth depends on their income; or money should be the basis for choosing a partner in marriage.

This way of thinking could lead to much more damaging long-term psychological problems than not being able to balance a check book.

Finally, financial literacy providers need to learn something from major retailers like Target and Wal-Mart. These organizations practice “just in time” management of their inventory.

This means they don’t order from suppliers until they know the products can be sold and not languish on their shelves, diminishing the company’s profitability.

John Lynch of the University of Colorado, Boulder discovered some fascinating data in his analysis of the impact of financial education on behavior.

It turns out one hour of financial education wore off after about five months; 18 hours wore off after 17 months; and 24 hours disappeared after 20 months,  according to Lynch’s study.

By the time students are old enough to buy a home or contribute to a 401k plan, they will have completely forgotten everything they learned about these topics in school!

The smart strategy is to break down the course information into chunks and teach it in a “just in time” manner.

For example, mandatory credit education would be required during the home purchase process, not in twelfth grade.

When this material is taught in high school,  students cannot relate at all to the subject matter. Teaching them about mortgages has about as much relevance to a teenager as the current weather on Mars.

A better strategy for parents is to use teachable moments (shameless plug) For instance, while shopping for groceries, pointing out a sale and using the money saved to purchase something else (or, better yet,  put towards an investment account) is a much more valuable and timely lesson than anything found in a financial literacy workbook.

Personally, I taught middle school students these types of lessons for about twenty years.  My motivation was always to make things interesting so they would be motivated to explore this topic on their own.

Many agree the best investors are self-taught. I felt if I could just spark their interest they would become intrinsically motivated to learn more. The true key to lifelong learning is self-motivation and the joy learning new things brings, not doing well on some exam to garner temporary praise.

I had to think outside the box to get them interested.

For example, I once brought in an audiotape of the S&P 500 futures contracts trading pit during the flash crash. The sheer terror in the traders’ voices captivated the students. I played this while the school board was visiting my classroom. Let’s just say that led to an interesting post-lesson discussion.

I brought in pictures of the massive gold vaults at the Federal Reserve. We watched Boiler Room. I told them crazy stories of my trading days. Like the one when, in a state of my 22-year old panic, I was planning my escape to Bermuda rather than tell my boss about a massive trading loss. (Didn’t do it; market came back to me.)

The point is the status quo is a failure and we need to move on.

Like the use of evidence-based investing in portfolio creation, we need to rely on data to construct financial literacy programs that work.

Being smart about money begins with how it’s taught.