Investors desperately need advice they can trust. Most have no idea how to go about finding it. 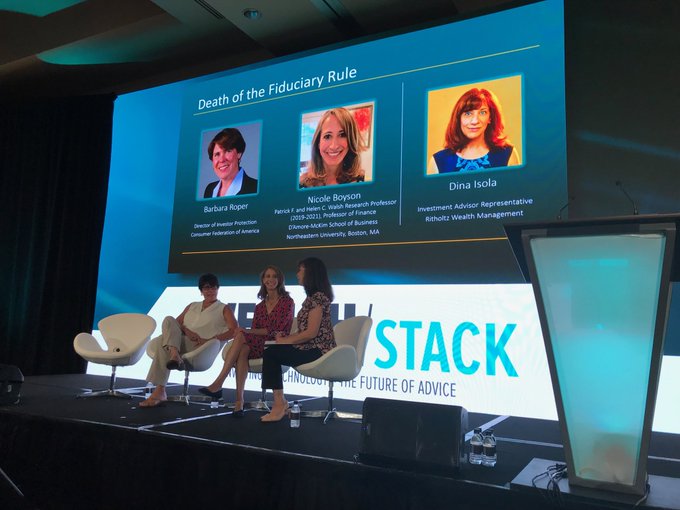 Legalese confuses retail investors, even when used by their advocates.

While minutia matters in a court of law,  Victory was declared in the court of public opinion the first few minutes.

Recalling her conversation with our friend and fierce fiduciary advocate Genti:

“Imagine being brought to the hospital and asked to take advice on a life-threatening condition. Two people approach you with a solution. One is an esteemed physician, the other a pharmaceutical rep and they weren’t required to identify themselves. Worse yet, the salesperson was allowed to insinuate  he had the same qualifications and incentives as the M.D.” Dina told the audience.

This dilemma faces millions of Americans deciding how to invest their retirement funds.

The panel began discussing why the SEC’s Reg BI won’t solve this problem and may make it worse.

Barbara Roper pointed out, “there is no actual definition of Best Interest in the legislation.” Making things murkier, disclosure is the blunt tool nominated to prevent investor abuse.

An epic fail for the ages.

Financial firms and their lobbyists backing Reg BI know this  – this is the main reason Ms. Roper been working on the same problem for over 30 years.

Nicole Boyson chimed in, “Disclosure gives investors a false sense of trust, They believe if advisors throw this out there it must mean they’re looking out for their best interests.”

Nothing could be further from the truth.

She spoke about her research and TIAA. “TIAA fully disclosed that their proprietary funds might not be the best choice for investors but they were using them anyway.”

The result, investors stuck with these underperforming funds, though they were clearly warned they weren’t in their best interests.

Investors were lulled into a false sense of security, “What an honest and good guy, I don’t need to read this.” Rinse and repeat.

The panel took to discussing revenue-sharing and how funds who employing this practice consistently underperform the market.

Nicole piped in, “too many fiduciaries are acting as brokers.”

Pointing out, 80% of RIA firms are fee-based, meaning they can collect commissions while dispensing fiduciary advice as long as they disclose it.

Commissions and fiduciary advice rarely get along well.

Nicole also brought up the fact that in many fee-based RIA’s, 80% of advisors are licensed to sell insurance. Tempting them into putting inappropriate products into client’s portfolios. 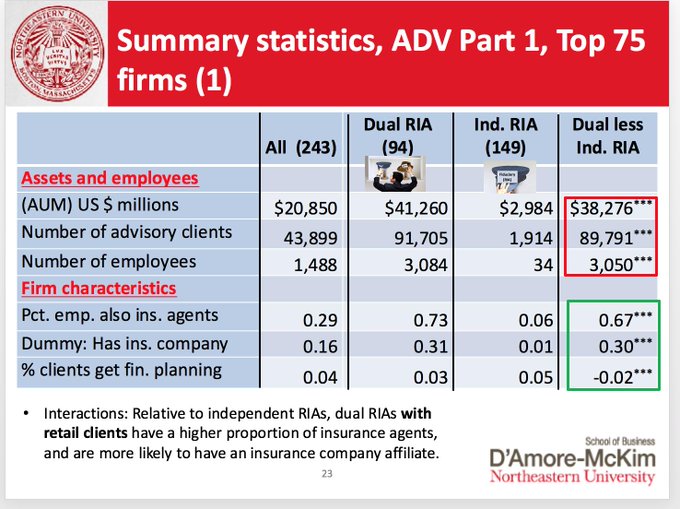 This ponderous argument reared it’s conflicted head in the Q+A that followed. “Are you saying insurance planning shouldn’t be part of a financial plan?

Nicole responded “If it’s part of holistic planning – a life insurance or LTC product that sensible or reasonably priced. I don’t want to infer that by itself is bad and evil”

Tbh the idea that mitigating conflict means you can’t recommend insurance in a holistic plan AT ALL is a tired one. ?

Out of all the terrific panels at WealthStack, this one was the timeliest.

Seven states asked a federal court on Monday to invalidate a regulation that requires stockbrokers to disclose more about conflicts of interest that could influence their financial advice, claiming that the rule is weak.

“With this rule, the SEC is choosing Wall Street over Main Street,” New York Attorney General Letitia James said in a statement. “Instead of adopting the investor protections of Dodd-Frank, this watered-down rule puts brokers first.’’

The same day the states announced that they were suing the Securities and Exchange Commission over its Regulation Best Interest, XY Planning Network also filed a lawsuit challenging broker-dealers’ ability to deliver comprehensive financial planning services under the rule.

“We think the court would have to vacate Regulation Best Interest or, alternatively, if the SEC is willing to modify the rule and state that financial planning advice is investment advice that is not solely incidental, that would put Reg BI back in compliance” with Dodd-Frank, Michael Kitces, XYPN’s co-founder, told ThinkAdvisor in a Wednesday interview.

Last year, Dina travelled to Congress armed with many of these same arguments. Facing a hostile Congress, she left disappointed and angry

Boy, have things changed in six months. She posed this question at the conclusion of the panel. “Is there any hope for the average investor?”It turns out, the answer is a resounding Yes!

Who would have thought that the battle would be joined in the heat of the Arizona Desert?

The real war for the hearts and souls of investors everywhere is just beginning. 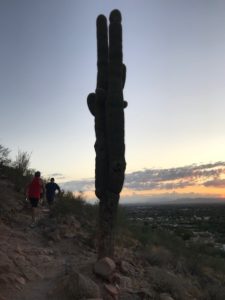