Welcome to the Theater of the Absurd – A.K.A. the U.S. Congress.

There’s a good reason why the legislative branch is less popular than root canals and traffic jams.

Last week, I traveled to Washington, D.C. with Dina, who was testifying why the SEC’s proposed Reg BI is insufficient to protect investors from the claws of salacious salespeople.

We proudly hold this title as a badge of honor.

Dina thought she could make a difference and maybe she did. What’s certain, she ignited flames of lobbyist-funded venom from the bill’s defenders. When Industry lobbyists agree with legislation designed to regulate their clients, it’s a sure sign they’ve hijacked it. 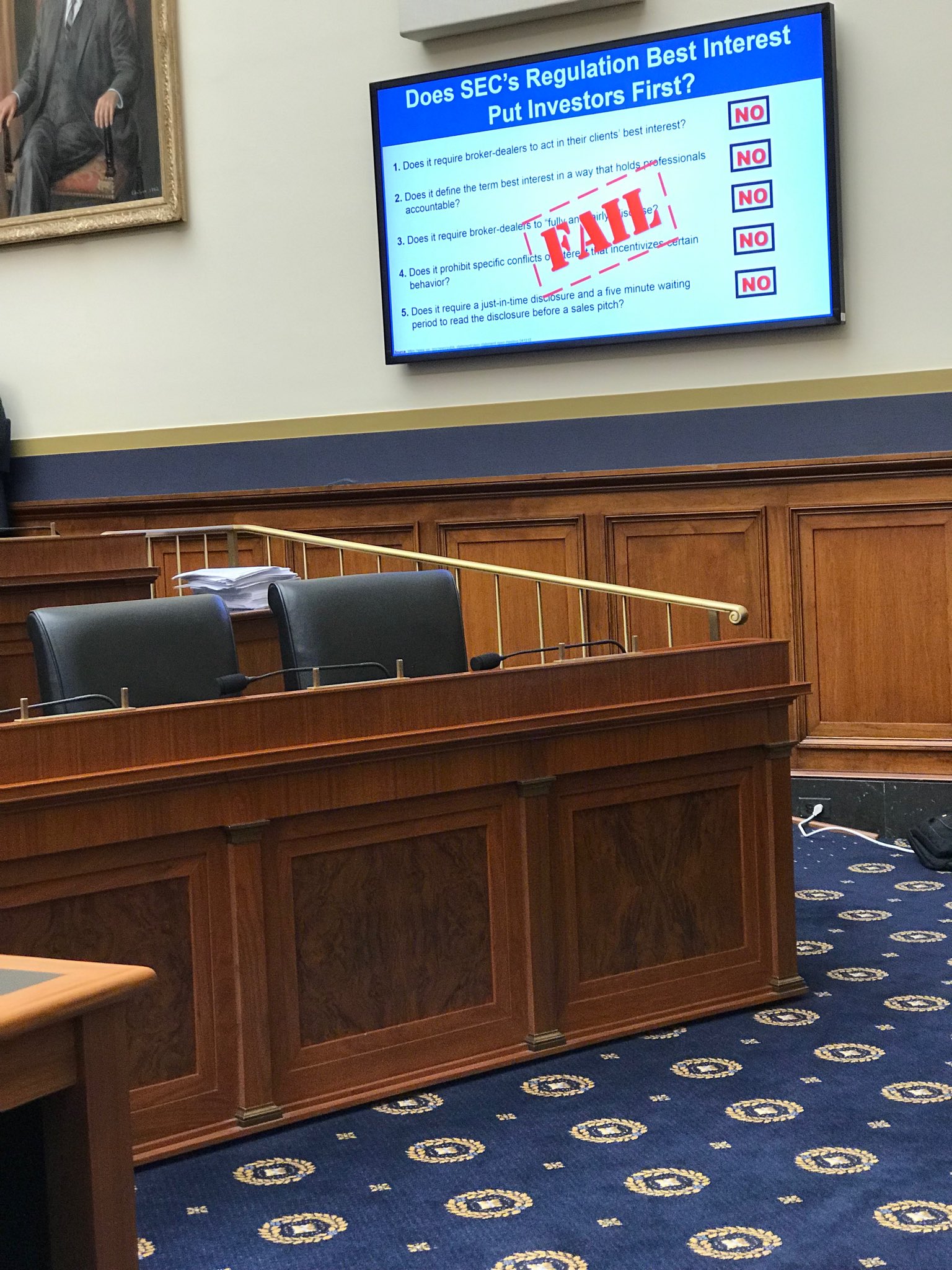 What’s indisputable – Congress is broken. Crony capitalism runs amok. Where else would a fiduciary rule designed to protect investors be treated as if it was the spawn of the anti-Christ?

We thought we’d find intelligent discourse; instead, opposition views were silenced, pummeled into submission by a toxic brew of confirmation bias and tribalism. Conflicted investment advice somehow was twisted into a rallying cry to PROTECT the small investor. As the carnival barker/boxing promoter, Don King once said: “Only In America!”

In the congressional land of the lowest common denominator, fatally flawed legislation is better than none at all.

Senator Elizabeth Warren has a good grasp of this charade when speaking of the proposed legislation. “Wall Street might be excited about a green light to cheat working families, but it’s a bad sign for consumers.”

The hearing was dysfunctional for many reasons.

A Cast of B-List Hollywood actors and actresses: The session was permeated with hyperbole and pompous grandiosity.  Dramatic pauses, false indignation, and feigned outrage counted more than substance. One House member declared he was the only person standing between the destruction of capitalism and more importantly his beloved Indiana Hoosier constituents. What was the reason for going from zero to DEFCON ONE?  Why the DOL’s defeated fiduciary rule, of course!

(Start at the 2-hour mark here if you don’t believe me.)

As Scott Dauenhauer points out, “The irony that the Republican reps on House Financial Services are protecting “the little guy,” pretending that eliminating conflicts is elitist. You have to be kidding me. This hearing is boiling my blood. Fiduciary IS NOT a partisan issue.”

Save the acting for community theatre.

There should be a category on Rotten Tomatoes designed for congressional histrionics.

Congress is the only place where brokers selling plain folk expensive and unnecessary investments are turned into Patrick Henry moments.

“Give me a variable annuity or give me death!”

Free advice: Choose another hill to die on. It’s not a good look.

False Data: “Some say” isn’t a good enough argument when speaking about an issue that impacts the retirements of hundreds of millions of Americans. The attacks on evidence-based investing strategies, such as algorithms and other fin tech, were comical. Reg BI supporters used arguments declaring:” Implementing a fiduciary standard is equal to abandoning small investors. The computers won’t stop them from making bad decisions.” What does that even mean?  A conflicted salesperson will be more than happy to transact on an investor’s over-emotional whim – he will, after all, get paid to do so and that will advance him up the pay grid.

Fiduciary foes act as if companies like Betterment, Wealthfront, Vanguard, and the Garret Planning Network don’t exist. These and many others better serve small investors with a combination of technology and a human touch than conflicted financial salespeople.

One thing’s clear, insurance and broker lobbyists are getting their money’s worth with the spirited defense of the indefensible.

1925 just called, they would like the Scopes Trial back. “No need for any of that book learnin’.”  Conflicted brokers are more than willing to fill the gap with their perverse incentives.

Things got progressively more ridiculous. The Hoosier guy claimed if the Fiduciary Rule was implemented “some studies showed it would’ve cost the average retirement investor over $800 per year.” Wait…what?

The more numerate among us determined our current system transfers roughly $17 billion from investors into brokers’ coffers in the form of unnecessary fees.

In 2019, small investors have numerous options, including paying less than 0.50% all in and have their money managed by a fiduciary. In the land that time forgot, it’s a better choice having a broker peddle a Class A mutual fund which contains a 1% or higher annual expense ratio combined with a 5.75% upfront fee.

It’s amazing what people will say for campaign contributions.  Talk about conflicts of interest! 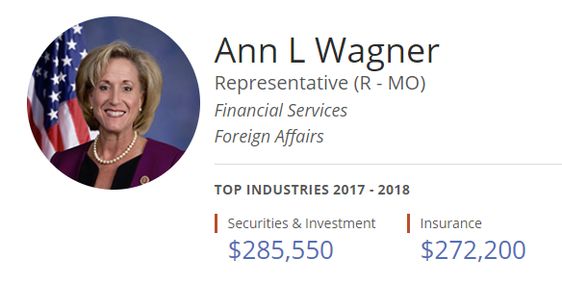 Trick Questions: Congress is one big game of gotcha!   Opponents attempted to goad pro-fiduciary witnesses into saying a horribly flawed rule is better than none at all.

A rule that doesn’t adequately define best interest does more damage than the status quo.

Why? The industry would erroneously state the massive conflict of interest situation is solved. It’s safe for everyone to jump back in the pool. In effect, giving a false sense of security and raising the threat level for the average investor.

The solution is a rule with teeth – not warmed over leftovers.

The panel members proved their mettle as hardline fiduciaries. Dina’s comment was the perfect response to the attempted entrapment. “Both choices are horrible – I abstain.”

When members weren’t bloviating their lobbyist-endorsed propaganda, they were gleefully tossing powder-puff questions to Mr. Pitt.  Running out the clock is a great strategy for the NFL but is the antithesis of real participatory democracy.

Complicit Witnesses: Harvey Pitt is smart and successful. What he isn’t is a proven advocate for small investors. His reign as SEC chair was short and tumultuous resulting in an abrupt resignation in 2002. Pitt was accused of inserting a provision into corporate fraud legislation that would raise his pay and elevate his status to the Cabinet level.

Some feel his close relationships with major accountant groups helped lead to the collapse of Enron and Worldcom – resulting in massive losses for many average investors.

It seemed as if he was auditioning for a job as an industry lobbyist rather than trying to protect investors from malfeasance. Big name witnesses often give dangerous credibility to broken ideas.

“The brokerage business model, with all of these and other perverse incentives, is set up to pit broker against the client. These incentives reward bad advice that harms investors. What’s truly shocking is that brokers are allowed to engage in harmful conflicts of interest all while leading investors and policymakers to believe they are trusted financial advisors who will do what’s best for investors.”

(You can watch her 5-minute testimony at the 19-minute mark here.)

It would’ve been terrific if some of the more progressive members of Congress were there to hear it.  But we were thrilled to see Rep. Katie Porter (D – CA, 45th District) in action.  She had a lot of issues with Mr. Pitt’s views.  You can watch her line of questioning here at 1:49:05. 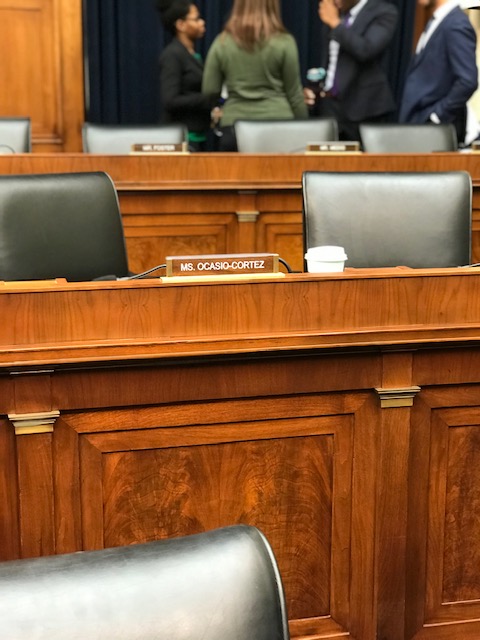 Sadly, they were absent. Just like common sense and bi-partisanship in dealing with issues regarding protecting the little guy from financial predators.

The battle for capitalism’s soul has just begun. 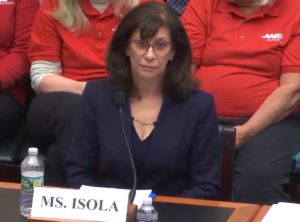 Better to have no rule at all Reg BI critics say