Newsflash! Many retirees are not spending ENOUGH in retirement.

This flies directly in the face of the “retirement crisis” that is constantly drummed into our brains.

We see this on a daily basis. Many clients constantly focus on the threat of running out of money rather than enjoying the fruits of decades of saving and sacrifice.

Michael Kitces wrote an excellent article on this subject: “Why Most Retirees Will Never Draw Down Their Retirement Portfolio.”

He brings to light something called the “consumption gap.”

“In theory, the whole point of saving and investing for retirement is that upon reaching retirement, it’s time to spend down the money and enjoy it. In practice, a growing base of research finds that for most of their retirement, retirees are just continuing the growth of their pre-retirement portfolios, suggesting a “consumption gap” between what retirees could and should spend versus what they actually do.”

Most retirees do not begin to touch their principal until they reach well into their eighties. Leaving your entire principal to heirs means you under consumed your retirement portfolio and needlessly sacrificed a higher quality of life; unless, of course, that was your goal to begin with. In my experiences, it is often not.

Conventional wisdom states retirees should not withdraw more than 4% of their retirement balances, along with an adjustment for inflation, on annual basis. This number was determined by assuming absolute horrific returns at the beginning of one’s retirement. Though this is possible, the reality paints a brighter picture. 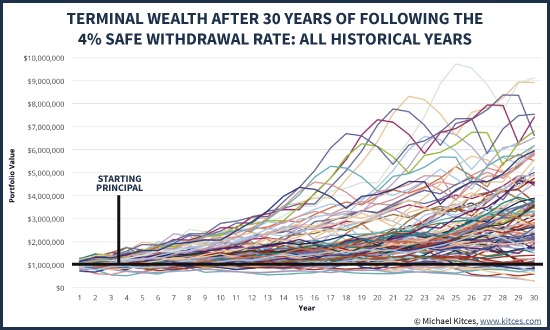 “As the chart reveals, the decision to follow a 4% initial withdrawal rate makes it exceptionally rare that the retiree finishes with less than what they started with, at the end of the 30-year time horizon; only a small number of wealth paths finish below the starting principal threshold. In fact, overall, the retiree finishes with more-than-double their starting wealth in a whopping 2/3rds of the scenarios, and is more likely to finish with quintuple their starting wealth than to finish with less than their starting principal!”

While we are certainly not recommending retirees spend like drunken sailors, too many have unrealistic expectations about financial Armageddon.

I love telling people they can upgrade to business class, or buy that new car. Isn’t this the point of having money? Too many people deprive themselves because they are receiving improper or no advice on spending matters.

It’s often easier to save than it is to spend for people who have accumulated significant retirement balances. Old habits are hard to break.

My thinking is this:  You may be healthy at 65, but things might change a decade from now. Hiking mountains and traveling long distances to exotic locales might not be possible after hip or knee replacements. Chronic illnesses could care less about your travel plans.

Making memories with your family will provide more enjoyment than watching money accumulate in your IRA. Spend it if you can.

I doubt you’d ever hear someone say, “I really wish I had a little more money in my retirement account than having taken that family trip to Hawaii.”

Many criticize the fees financial planners charge for their services. Well-qualified, evidence-based plans are worth their weight in gold. Enjoying experiences and eliminating worry is priceless.

By combining social security, pensions and retirement balances, along with realistic return and inflation estimates, we can determine a reasonable spending rate.  This is something everyone needs, but few actually have.

If you are interested in learning about goals-based financial planning executed in a prudent manner to help fulfill your dreams, let us know.

This is what we do.

Source: Why Most Retirees Will Never Draw Down Their Retirement Portfolio by Michael Kitces