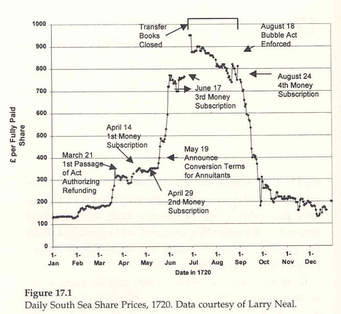 Bubbles and manias have no shortage of charlatans. Scoundrels often fuel the blow off breakouts that end in an ocean of tears.

We are currently observing financial carnival barkers emerge from the shadows in this next stage of cryptocurrency mania.

Sightings of “free” crypto classes are turning up as click bait. In the words of J.C. Parets, “We are hearing more and more from so-called crypto professionals who were serious losers in a previous life.”

Our CEO, Josh Brown, summed this situation up perfectly.

“Another aspect I’m going to get into at some point is the flood of charlatans, promoters and liars coming into the space. It grosses me out and it’s becoming impossible not to talk about. I’m going to talk about it.”

You have been warned.

In 1711, we saw something similar play out – minus the blockchain.

Back in the day, most wealth was derived from land. The most appetizing morsels were found in the Caribbean and Pacific Islands along with Central America.  Their favorable climate afforded long growing seasons and stoked the dreams of speculators.

During this period, England was in debt due to one of their many wars with France. They needed a solution to fulfill their financial obligations. The South Sea Company fit the bill.

England could soak up their bonds but the 99-year annuities were another matter. (Those damn annuities even caused problems for the powdered wig wearing set!)

As a way to pay off these annuities, England offered a deal. Annuity holders could exchange their obligations for stock in The South Sea Company.  A trade monopoly was granted by the British Government over this valuable geography. Riches were sure to follow.

The Caribbean, Pacific Islands and Central America were considered the oil fields of their era. What could possibly go wrong?

The Board of Directors had zero knowledge of Spanish America or commerce.

The hype machine was just getting started. Newspapers were bribed to exaggerate in great detail the company’s financial prospects.  Government officials were bribed and we were off to the races. The stock jumped from 129 pounds to 800 for no good reason.

Like our 2017 cryptocurrency situation, manias can morph and metastasize into something much worse. New schemes, like we currently observe with fraudulent initial coin offerings (“ICOs), appeared.  A greedy speculative public draws charlatans like bees to honey.

The 1720 version included such wonderful ideas as:

This nonsense was as good as somebody ringing a bell at the top of the market.

The South Sea Company collapsed along with the rest of these insane ideas. There were calls to “find the Malefactors, tie them in sacks and drown them in the Thames.”

One of the reasons the South Sea blew up was it no longer had a monopoly on the “speculative money.”

This is another repeatable historical pattern. The competition for investment dollars hastens a mania’s demise.

“What killed the dot com and software stocks in the early 2000’s was not just their business models, but the incredible deluge of new IPOs coming to market every day. I think in 1999 there were 700 IPOs or something, three a day all year, each vying for attention and capital from a finite pool of investors.” -Josh Brown

The more things change, the more they stay the same.

Market history cannot help you predict the future. It can teach you a valuable lesson.

In the words of Morgan Housel, “Something usually occurs to keep good news and bad news from going on forever. Recessions end because excess gets washed away; booms end because everything gets priced in. Most people wake up every morning wanting to make the world a better place, but psychopaths, idiots, charlatans, and quacks are persuasive enough to occasionally shake things up.”