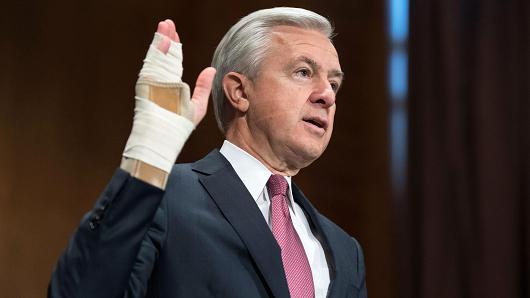 Financial firms should have their own theme songs; not the pabulum spewed by corporate consultants, complete with obligatory and hokey multi-cultural pictures. They should keep it real and honestly choose lyrics that truly represent their corporate culture.

Here is the perfect chorus for Wells Fargo:

“Oh there ain’t no rest for the wicked

I got bills to pay, I got mouths to feed

Cash rules everything.  Insert shareholders’ in front of mouths to feed, and we have perfection.

This week we found out Wells created a new way to sell car insurance. Don’t tell customers, they are buying it.

Wells Fargo charged 570,000 customers for auto insurance they didn’t need.  As an added bonus, this could potentially cause some their victims to default on their loans and have their cars repossessed.  Since 2012, the U.S. Consumer Financial Protection Bureau (CFPB) has received 1,826 complaints about Wells Fargo vehicle loans or leases.

This is just the latest in their lengthy rap sheet in their series of crimes against humanity.

September 2016 – In their most famous caper, Wells was fined $185 million with an additional $100 million penalty from the CPFB for the greatest act of identity theft in U.S. history.  They illegally opened 1.5 million bank accounts and 565,000 credit cards without customer authorization.

April 2017 – Wells Fargo was found to be unethical in handling the credit card processing of many small business accounts. An internal probe found some employees falsely reported customers’ sales and pushed small firms into costly contracts they didn’t understand.

May 2017 –The city of Philadelphia sued Wells Fargo for allegedly discriminating against minority home buyers. A federal court in Pennsylvania alleges that Wells Fargo violated the Fair Housing Act of 1968 by “steering” minority borrowers into mortgages that were more expensive and riskier than those offered to white borrowers.

This rap sheet does not include having the highest fee robo advisor, or firing employees who dared to question these unsavory business practices.

All they seem to be missing is a platform to exploit public school teachers by placing high-cost annuities in their 403(b)s.

These items are heinous by themselves. Collectively, their destructive impact is multiplied exponentially.

There is something else here that is even more unbelievable.

This reminds me of a scene in the HBO series A Band of Brothers. The hero, Lt. Speirs, runs across the battlefield and right through the German lines to deliver a message to his cut off forces. This act of bravery was incredible enough. Unbelievably, the story did not end here. The most amazing thing was he ran through the German lines again and came back! (Watch it here.)

What does this have to do with a firm that has a culture that is the polar opposite of this kind of honor and courage?

Wells Fargo has its own surprise ending.

The most amazing thing is so many people still trust Wells Fargo with their investment accounts.

Take a deep breath. Wells Fargo manages $1.6 trillion in clients’ assets and receives much of its business from its bankers?

Many of the same people who opened up unauthorized credit and bank accounts, sold people car insurance they did not need, and racially discriminated against mortgage applicants are steering people into investment accounts?!

What could possibly go wrong here?

Many of the people who work for Wells Fargo are decent human beings. Their behavior can be largely be attributed to a corporate culture dominated by perverse incentives instituted by an upper management who stresses monthly sales and quarterly profits above any form of human decency. People will do what they have to do to keep their jobs.

This is the heart of the problem.

I would make one prediction. If there are not massive changes regarding the Board of Directors and upper management regarding the culture of this firm, a trillion dollars in managed assets will most likely find a new home.

Unlike Lt. Speirs, they will not come back.