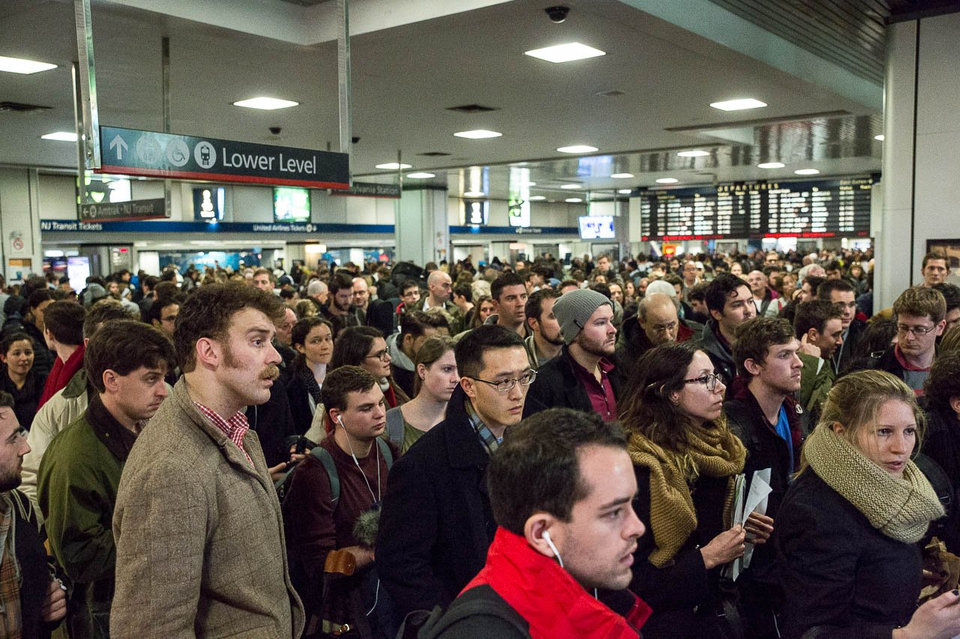 Following the herd in life — or investing —  tends to end badly.

Last night we were trapped in the transportation hell-hole called New York Pennsylvania Station. There was some sort of “signal” problem which ended cancelling 80 trains. When this happens, a nuclear chain reaction ensues. Since so many trains are cancelled, the crowd then tries to pack into the few remaining ones. Simple mathematical laws then take over. When one train has to carry the contents of the four cancelled trains, massive chaos is the result.

People trying to stuff themselves into trains is as futile — and nauseating —  as Chris Christie trying to squeeze himself into skinny jeans.

Panic causes passengers to act irrationally; like  catching one of these inhumane cargo containers is on par as evacuating a plague-ravaged NYC in the film Legend.

In the words of one rider, ” People tearing open doors on the LIRR and begging to make more room like this is the last life boat leaving the Titanic.”

To compound the misery, and enhance anxiety, gates were put up and newly arrived passengers were not allowed to enter the station. Talk about exacerbating the fear of the unknown.

We then made a calculated decision. Stay in this lunatic asylum or leave and have dinner. Hopefully coming back later to a later train but calmer situation. We left.

This made me think of investing. When the market makes its (one in every three years or so) 20% market corrections, people tend to act like those trying to pry the train doors open. They behave even worse when the really scary 50% drops occur.

All of the above are precisely the wrong things to do.

In the words of Mark Mobius, “Sometimes, when there’s too much traffic clogging up the road you need to take a different route. Following the same path as everyone else can stall your progress in reaching your investment goals too. Templeton’s founder, the late Sir John Templeton, was a proponent of not following the crowd. One of his more famous contrarian quotes is, “To buy when others are despondently selling and to sell when others are avidly buying requires the greatest fortitude and pays the greatest ultimate rewards.”

My solution to this train panic was to look at the big picture while others were losing their minds. We decided to buy into the panic in the form of leaving, instead of following the crazed herd that was selling. This is not easy. The best way to avoid panic in train stations and investing is to side-step the people who are panicking around you.

Instead of throwing myself onto the tracks and demanding a seat on a train (that violated every fire hazard rule in the nation), We left the madhouse and had some grilled octopus over arugula. We got home a couple of hours later but avoided massive stress and stupid decisions. This was well worth the price in my book.

The next time the market starts to puke, take a step back, and observe the panic around you. Ask yourself a question: “Is this where you want to be?”

If not, turn off the TV and get yourself a pizza (or octopus, if you’re into that sort of stuff).

Your portfolio will thank you later.

Full Disclosure: I do not have to travel to this place on a daily basis like many of my colleagues. This makes it much easier for me to take these events in stride.