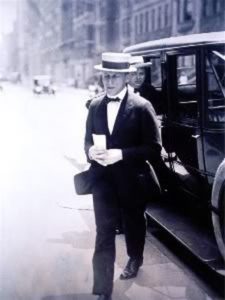 The opposition to laws designed to shield investors from conflicted interests expose the dark underbelly of too many financial firms. The methods they employ to protect their valued hunting grounds often border on the despicable.

Take for instance a common defense of the indefensible; the so called “expert” testimony.

Washington D.C. is overflowing with think tanks that often shift public policy in their direction, based on their presumed impartial research.

A prime example of propaganda, disguised as data, occurred during the initial hearings to debate the implementation of the Fiduciary Rule in 2015.

The main culprit was an organization named the Brookings Institution. This group was founded a century ago with a mission to: “Conduct high-quality, independent research and based on that research to provide innovative and practical recommendations.”

It seems one Dr. Robert Litan missed this particular memo.

He was sent to the hearings to argue against the implementation of the Fiduciary Rule as a so-called “expert independent source.”

Dr. Litan turned out to be anything but.

U.S. Senator Elizabeth Warren (D-MA) called these hearings to expose the unsavory and deceitful practices of salespeople posing as real financial advisors. She testified and provided specific evidence of the various kickbacks these salespeople receive in order to push high-fee investment products upon financially uneducated consumers.

She described a world that included luxury cars, fancy resorts, cash and Super Bowl-like rings. These were the rewards for pushing products like high-cost variable annuities on a vulnerable client base. These “investments” often end up financing the retirement of the salesperson, rather than the client’s.

It was now Dr. Litan’s turn to speak.

In one of the most audacious acts in recorded human history, he described a scientific study he completed for Brookings. In a head-scratching hall of fame moment he stated, “Banning these kickbacks would cost consumers as much as $80 billion.”

In other words, according to this high-quality independent research, consumers need to buy crap so they would not lose money.

Senator Warren sat in disbelief as this nonsense was fed to the crowd. She knew Dr. Litan was not a stupid fellow. Something else must be going on for him to make such preposterous claims.

After doing some digging, she found some pretty interesting stuff. It turns out the funding for this “research” was provided by a company called The Capital Group. It was no coincidence that they provide financial services.

It gets worse. It turns out: “Corporate executives from the investment company had helped Litan prepare the report by providing feedback and editorial comments before the document was made public.”

These allegations would make Arnold Rothstein, the guy who fixed the 1919 World Series, proud. Though Rothstein was a 1920’s gangster, he did not pretend to be something he was not. This is more than can be said for the so-called “respectable” Brooking’s Institute.

Predictably, many  conflicted financial firms and their lackeys accused Senator Warren of “McCarthyism” and silencing viewpoints other than her own.

Warren was later vindicated from this slander. In the end, Dr. Litan left the Brookings Institute and they updated their rules about conflicts of interest.

While this is one case, paid experts are a menace to individual investors, and many others for that matter (think of cigarette companies and the deadly claims of their experts).

It seems that many studies funded by conflicted financial firms to combat transparency and other investor protections are not worth the paper they are printed on.

This is a reminder as to why a rule that is “outrageously” designed to look after the best interests of investors has been so vehemently opposed by many in the industry.

The lesson learned here is this: The next time you see a financial “expert” testifying before Congress on behalf of the brokerage/insurance industry, make sure that you read the fine print.

Source: This Fight Is Our Fight by Elizabeth Warren