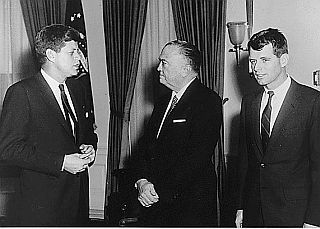 “The price of doing the same old thing is far higher than the price of change.” – Bill Clinton

One of the biggest problems in our educational system is the method in which United States history is taught.

Far too often, the government is given too much credit for many of the progressive changes our country has made over the last centuries.

Fewer props are directed to the brave individuals who had to fight a two-front war to right a wrong. They had to battle their oppressors along with their government allies.

This was true during the railroad strikes during the early part of the twentieth century in which federal troops killed many of the exploited workers.

The most famous example of this collusion happened during the Civil Rights Movement.

The Director of the FBI, J. Edgar Hoover, was more concerned with destroying the reputations of the movement’s leaders than stopping the rampant injustices that were affecting millions of our citizens.

With the approval of Attorney General Robert Kennedy, Hoover tapped the phones of Martin Luther King and his associates.

He bugged King’s hotel room and blackmailed him with recorded conversations he had with several women.

What does this have to do with a public school teacher’s retirement plan?

It turns out, quite a lot.

In order to place 403(b) plans under the jurisdiction of the Department of Labor (and subject to the recently passed “Fiduciary Rule”), Congress would need to intervene.  This law would make teachers’ employers responsible for providing a plan that would suit school employees’ best interests.

In other words, high-cost annuity products would be replaced with low-cost index funds.   Billions of dollars in unnecessary expenses and sales commissions would instead be saved and put back in to teachers’ accounts, significantly raising their account balances.

There are many lobbyists, politicians, certain teachers unions, and others that have made an unholy alliance to prevent changing this inequitable status quo.

Like many progressive movements from the past, brave individuals must not only fight the oppressive insurance companies’ fees, but also those who are supposed to be looking out for their best interests; regulators, unions, school administrators, and elected officials all fall into this category.

The question now becomes what should be done to disintegrate the current system?  The way the answer should be approached is to focus on what NOT to do. That would mean waiting around for the government to step in and solve the problem.

Doing this could extract a huge price, hundreds of thousands of dollars drained from teachers’ retirement accounts, due to the deadly combination of high fees and low returns.

The recent five part series in The New York Times has exposed this scandal. Ignorance is no longer a valid excuse.

There is a way out. A company called Aspire is available in thousands of public schools around the nation.

Their platform offers mutual funds from excellent companies like Vanguard and Dimensional Funds.

If they are not, demand that they be added. It is your right to have at least one low-cost option. You are entitled to a choice that does not include fee-plagued annuities and expensive actively-managed mutual funds that dominate most lists.

Take matters into your own hands and do not wait for the tide of history to shift in your direction.

If you need some help, don’t hesitate to let me know. We can walk you through the process.

In the end, the whole “victim” thing will not solve your problem. There is a solution available that does not include retreating to a “safe space.”

In the words of another famous ex-president, Teddy Roosevelt, “If you could kick the person in the pants responsible for most of your trouble, you wouldn’t sit for a month.”

It’s time to kick these rotten choices out of your 403(b) account.

If you choose to ignore this advice, the only person you have to blame is yourself.