“If you’re very stupid, how can you possibly realize that you’re very, very stupid? You’d have to be relatively intelligent to realize how stupid you are.”  John Cleese 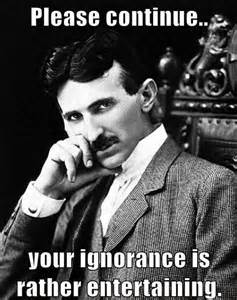 Imagine a school where the students, who were on the verge of failing, believed they should be on the honor roll and were infinitely smarter than their teachers?

This institution exists in the delusional minds of many investors. Often those who are borderline financial illiterates have the most confidence in their own abilities to manage their finances.

They are big investors in the ticker symbol DKE, the clinical term for the Dunning-Kruger Effect.

According to William Poundstone, author of Head in the Cloud, “Those most lacking in knowledge and skills are least able to appreciate that lack. This observation would eventually become known as the Dunning-Kruger Effect.”

According to Poundstone, one requirement of this delusional approach is “a minimal degree of knowledge and experience in the area about which you are ignorant” (not to mention, being ignorant of your ignorance).

Finance is a prime area where DKE runs wild. A recent FINRA study analyzed the results of a basic five question financial quiz. The results were fascinating and depressing at the same time.

The topics of this quiz included inflation, risk, diversification, interest rates and their relationship to bond prices.  In 2015, only 37% of the participants answered 4/5 of the questions correctly according to FINRA.

What was even more shocking than the atrocious scores was the self-perception of the test takers.

In a separate study, 81% of these individuals gave themselves high marks concerning daily financial management.

Interestingly enough, the individuals who gave themselves the highest scores were those who engaged in the most costly behaviors, regarding the use of credit.

Maybe some of this decision-making process explains why many young millionaires hold 33.5% of their money in cash! This negates the most powerful law of finance: compound interest.

This malady is not just found in finance. For example, many Americans are ignorant of anything that has to do with geography. According to Poundstone, roughly 9% of adult Americans can’t identify what country New Mexico a part is of; the most popular response is Mexico.

Politics is wrought with this deranged thought process.  The more frightening aspect is that people are casting votes and forming political opinions based on (often times) inaccurate and, at best, very limited knowledge which they believe makes them experts on a variety of geopolitical topics.

A study found that those who could not locate the Ukraine on a map were much more likely to support U.S. military intervention against the Russians in this conflict.

There was also a direct correlation between supporters of building a massive wall to keep out illegal Mexican immigrants and a terrifying lack of knowledge of the history of mankind.

The answer to an unrelated question posed to the supporters of this policy was very telling.

Those who learned their history from The Flintstones voted in the affirmative and so happened to be Great Wall supporters.  Oy Vey!

What is causing this explosion in meta-ignorance?

There are many theories but the internet and the media seem to be the most popular. In the words of Poundstone, “You cannot Google a point of view.”

He also states, “Today’s media scape does provide much guidance. It encourages us to create personal, solipsistic filters over information making it unprecedentedly easy to gorge on news of favorite celebrities in shows, teams, political ideologies, and tech toys. This leaves less time and attention for everything else. The great risk is not that the internet is making us less informed or even misinformed. It is that it may be making us meta-ignorant-less cognizant of what we do not know.”

Managing money or making an informed political decision requires much more information than a 140 character tweet provides. Unfortunately, too many people believe that this limited information provides them with enough knowledge to form a coherent opinion; they feel it also makes them an expert!

Those who make misinformed decisions due to their self-perceived expertise in finance, politics or whatever else might know much about other topics.

Unfortunately, The Game of Thrones, Sushi and Pokémon will not be of value in political or financial matters.

We would all be wise to heed the words of the world’s greatest philosopher Socrates when he said, “I know one thing: that I know nothing.”

Today, instead of this wisdom we have the high priest dogma of the modern meta-ignorant:  minute knowledge combined with high confidence.

All hope is not lost. Ritholtz Wealth Management is sponsoring a conference that is getting together the smartest people in finance to talk about all the things they don’t know about investing and to discuss what the data says actually works.

Come join us and liberate yourself from meta-ignorant financial advice. Sell your DKE and embrace evidence-based investing.

Listening to real experts speak about what they don’t know is a refreshing game changer.