Often what looks great in the lab leads to disastrous results.

The same goes for the history of curing fatal bacterial infections.

This powerful story is laid out in the amazing book, The Demon Under The Microscope by Thomas Hager.

Hager traces the story of a team of dedicated German scientists. He documents their painstaking search for a cure for the deadly infections that killed many of their friends and family.

Despite what you might hear from the Anti-Vaxxers, the world was a cruel and horrible place pre-discovery of life-saving antibiotics.

According to Hager, “Once a wound infection started, almost nothing could be done. There were no antibiotics. In World War I, infected wounds had killed hundreds of thousands of men, more soldiers, by one estimate, than died by enemy bullets.”

The discovery of the antidote in 1935 was the end product of a long and torturous road.

What worked in the tightly controlled test tube environment proved to be a bitter disappointment in the maze of variables located in the human body.

“The Body was too complex, the tissues too diverse, the reactions too intricate for a simple in vitro test to mean much. On the other hand, it was logical to assume that any medicine that worked against bacteria in the body would likely also kill bacteria in a test tube.”

This turned out to be false also.

Compare this scenario to the daily murder holes the average investors must evade to stick to their long term plans. 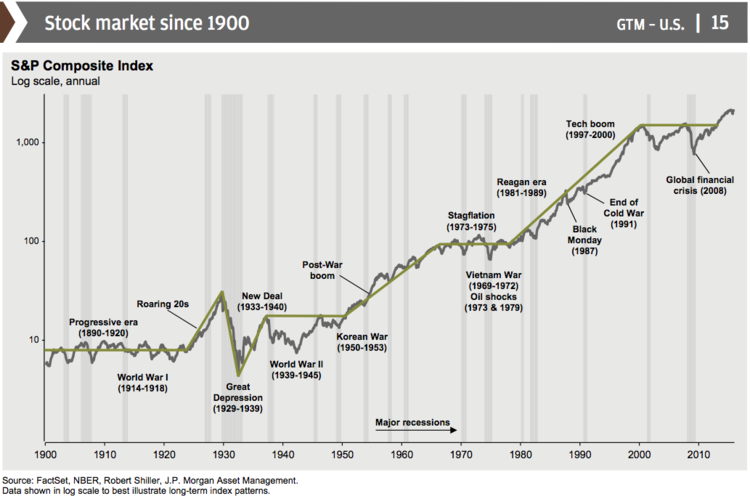 Think of this chart as a test tube. It looks fine in the lab, not so much in our monkey brains. In order to participate in massive long term gains, investors needed to look past world wars, depressions, terrorist attacks and a host of natural disasters. The buying and holding experiment is much easier in the financial laboratory of pristine charts than in our frail psyches.

Just like killer bacteria constantly adjusting to our bodies immune system, the market is a complicated beast.

It’s great to factor in an 8-12% return into a financial plan. The problem is – they almost never occur. Unless you define 6 out of 89 years as common. Even if investors manage to survive the daily barrage of artillery attacks launched by an eyeball seeking financial media, they are not out of the woods.

Average returns may be close to 10% but make only cameo appearances. 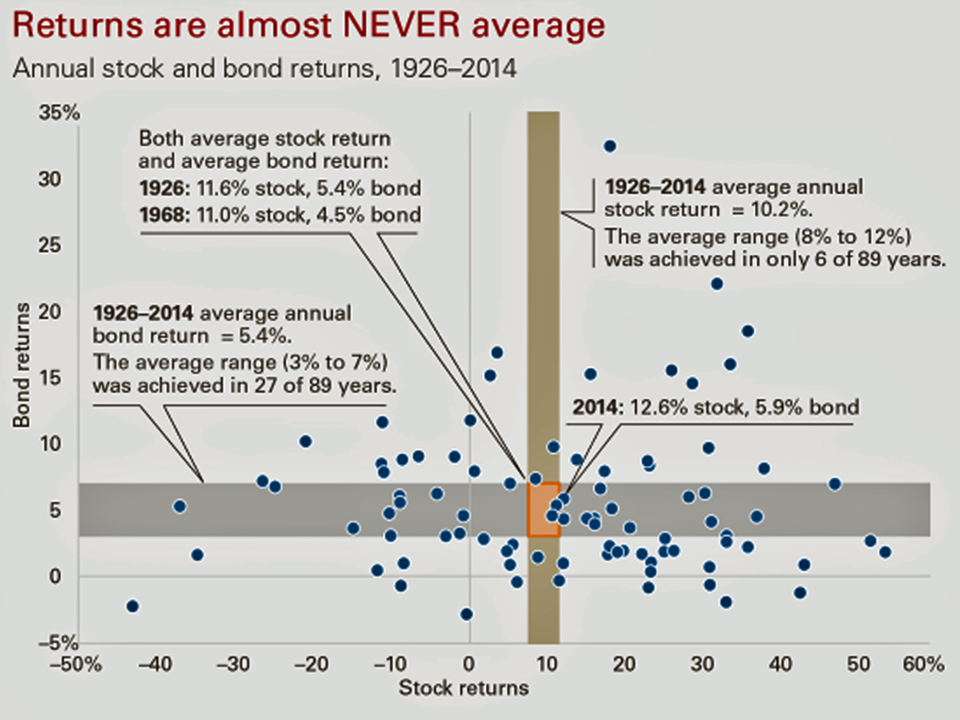 Run, don’t walk the next time you hear pseudo-market scientists forecasting the future. The most powerful market microscope on the planet is no match for diagnosing the complexities of the global financial markets.

Homo-Sapiens almost lost the war to bacteria. The petri dish of human emotions is an equally potent enemy.

Heed the words of Arthur Eddington, “Science is one thing, wisdom is another.”

Like the cure for super bacteria, there is a path to success.

Just don’t believe it will come easy or without some nasty surprises along the way.

Source: The Demon Under The Microscope by Thomas Hager