Only 1/4 of new teachers break even on their pensions.

Most won’t qualify for their pensions at all. Many who receive one receive less than what they put in.

These startling facts are found in this disturbing report from Bellwether Education Partners and the Urban Institute.

Only 23% of teachers will ever break even between their contributions compared to pension payouts.

Teachers who separate before reaching the break-even point may be better off collecting a refund on their plan contributions than
waiting to collect a pension at their plan’s retirement age; they effectively gain nothing from their retirement plan other than having access to a minimal interest savings account.

New teachers in Massachusetts hired after July 1, 2001, will NEVER receive a pension worth more than their own contributions plus interest. 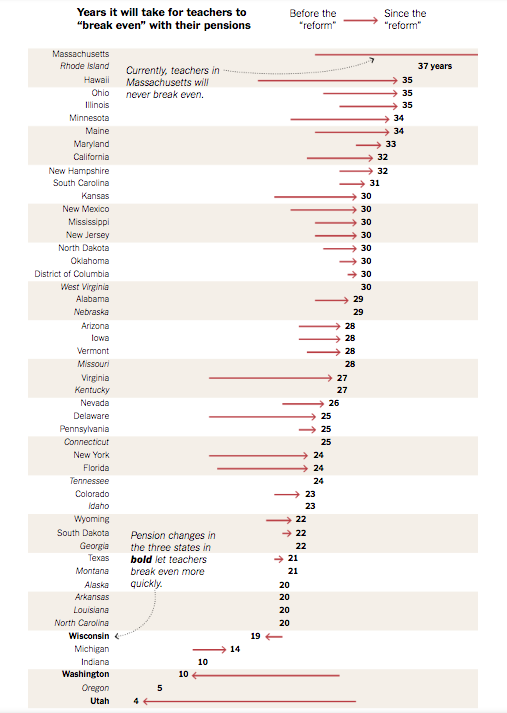 In only two states, Oregon and Utah do new teachers have greater than a 50-50 chance of at least breaking even on their pensions.

In 50% of state plans, teachers need to work at least 25 years before breaking even.

How did this happen?

Teachers’ pension plans are typically back-loaded. Benefits accelerate in the later stages of their career; but not so in the beginning stages. Since the great financial crisis, many states have cut benefits for younger teachers by increasing the age for retirement and making benefit formulas more ominous. 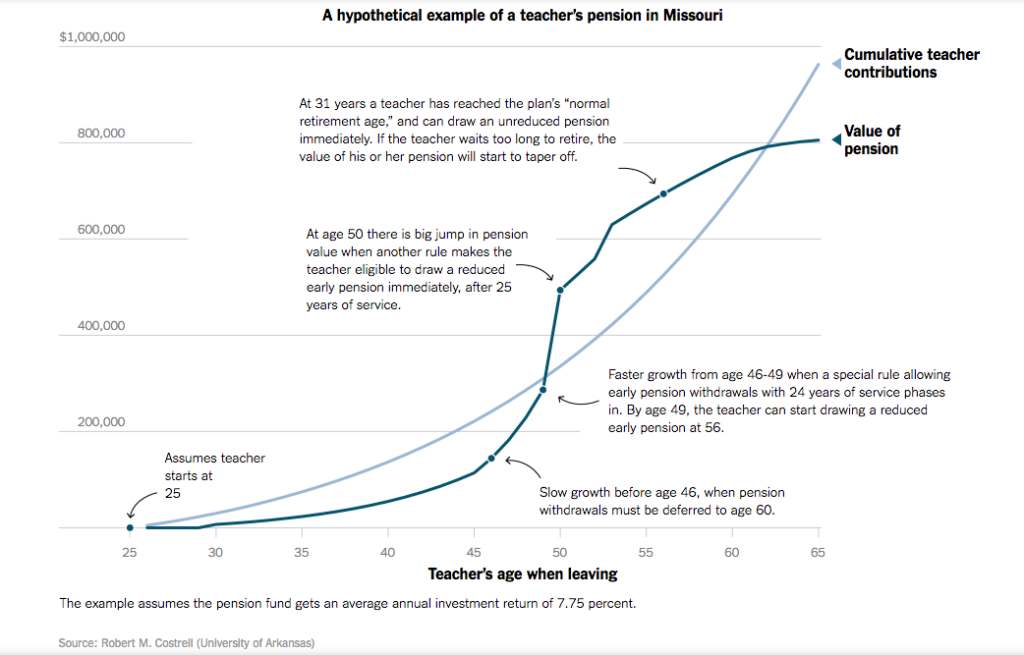 According to the U.S. News and World Report:

“Most professionals earn yearly retirement compensation based on a proportion of their annual salary. Not teachers. Because their defined-benefit systems base yearly retirement income on a proportion of their salary at the time they exit the system, most teachers earn very little retirement compensation for each of their first two decades of teaching and then suddenly accrue large amounts of pension wealth during their late career years.”

Pensions are terrific if a teacher stays the course. Unfortunately, many don’t.

According to The New York Times:

“A traditional pension can be a very attractive benefit, at least for those who work long enough to get back more money than they contribute. But because of high teacher turnover, mobility from state to state and other factors, only a minority of all newly hired teachers succeed in doing that.”

Just like our current Social Security system and the federal debt, young people are stuck with the tab. This situation is worsened by over $1 trillion in student debt that currently impacts many new teachers; not exactly the greatest way to recruit the best and the brightest into the profession.

Eating one’s young is a bad look and even worse economic policy.

We have mentioned how inflation can ravage a pension over long periods of time even if teachers are lucky enough to collect maximum benefits.

Combine these facts with absolutely horrific 403(b) plans and we have an epic problem.

Public education is the lifeblood of democracy. We are currently creating all the wrong financial incentives for young people to enter this essential public service.  We cannot afford to go in the wrong direction in this matter.

“You don’t have to worry about retirement, you have a pension.”  These words don’t mean as much as they used to, especially for young teachers.