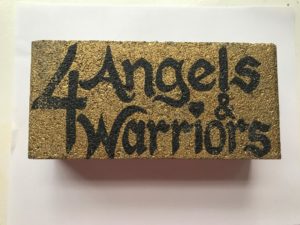 Sometimes you find a cause to support, but when a cause finds you it means something in life has sunk its teeth in and has torn some of your flesh.

Such was the case for our family when, in 2014, our fifth-grade son showed me a lump on his neck.  What appeared to be an infected lymph node turned out to be Hodgkin’s Lymphoma.  And, while it was caught in its early stages and is one of the more curable cancers, the road to recovery was filled with a hot-coal walk no child should ever endure.

As parents, nothing is more excruciating than not being able to make a scary, ugly world safe again for your kid.

Unfortunately, this road is also well-traveled with scores of other young warriors (and their families) fighting cancers with far less certain outcomes.   We can never forget those we passed in the corridors (and those, sadly, who are now angels).

Prior to our son’s illness, I was blissfully unaware that cancer is the disease that claims more young lives than any other.  I didn’t know that only 4% of federal funding goes to pediatric cancer research.  I didn’t realize that September was earmarked as Childhood Cancer Awareness Month, signified by gold ribbons.

In 2015, I noticed, along with many pediatric oncology parents, that the world was not a sea of gold in September the way it turned pink in October.

Thankfully, this is starting to change, but there still is much work to be done.

Our family will forever be indebted to Stony Brook Children’s Hospital for saving our son’s life, as well as scores of charities, like Make-A-Wish Suffolk, the Sunrise Fund, and the Ronald McDonald House that gave us hope and respite.

For us, the only way to heal from this is to ease the path for others who will share a similar, terrifying journey.

As humans, we are hardwired to help – and it is good for our health.

According to Elizabeth Dunn*, a psychology professor at the University of British Columbia in Canada who studies happiness, “People who donate money to charity are happier in poor and rich countries alike… Dunn said her more recent research suggests giving away money can tangibly improve one’s health.”

Dunn noted that when a donor is personally connected to a cause, the positive effects of giving are more pronounced.  She believes that giving is good for the heart.

Tony and I have had the pleasure of helping a number of our clients set up donor-advised funds, which allows for contributions of cash and assets (such as collectibles and investments).  Advantages to using these funds (as opposed to writing a check) include:

Next time you meet with your financial advisor to discuss funding your many goals (college, weddings, vacations and retirement) consider that being generous to a cause has many rewards, including helping to mend a broken heart.

*Source:  “People who donate to charity are much happier and healthier” by Reuters, NYPost.com, September 3, 2015.