The stock market is not a game and you should not act like a fan.

Do this and you’re setting yourself up for a huge disappointment.

It turns out being a garden variety sports fan isn’t what it’s cracked up to be.

Let’s take a look at soccer fans. They tend to be a spirited bunch. That is when they are not committing felonies, like beating up opponents and setting stadiums on fire.

Cass Sunstein of Bloomberg did a deep-dive and found out some disturbing truths about fandom.

The agony of defeat outweighs the euphoria of victory.

A study conducted by the University of Sussex looked at millions of reports from tens of thousands of fans (mostly U.K soccer fans). The report measured their happiness during various times of the day and correlated it to the team’s results. 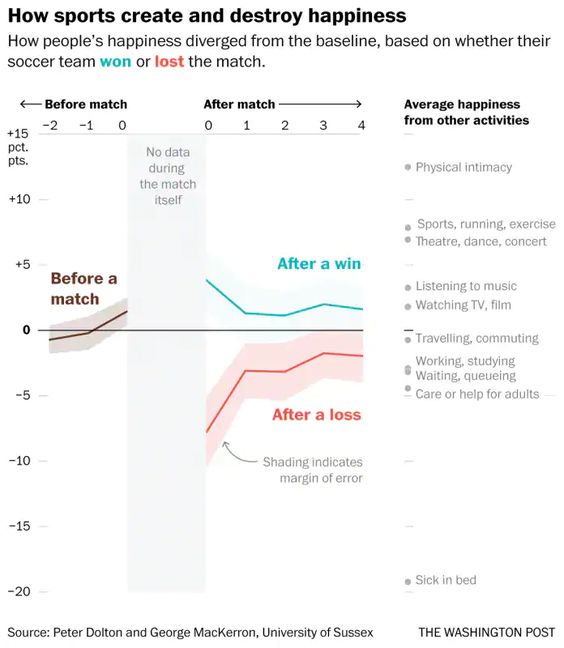 Using a small sample size, I can confirm this. My crew is much more pissed off when the N.Y. Yankees or N.Y. Giants blow a game than they are happy when the team is victorious.

This brings us to the stock market. Something called loss aversion causes the same results. We are genetically wired to pay more attention to bad rather than good news. This kept our ancient ancestors alive. It was more prudent to expend energy avoiding the sharp tusks of a woolly mammoth than jumping for joy at the discovery of a blueberry bush.

According to my colleague, Ben Carlson, “The stock market is positive roughly 54% of the time and negative 46% of the time on a daily basis. When you factor in the fact that losses sting twice as bad as gains feel good from our inherent loss aversion, this means the stock market will make you feel terrible every single day if you’re checking performance that often.” 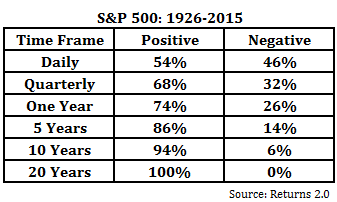 If you decide to follow the stock market on a daily basis you are bound to be pretty miserable.

A 162-game baseball season is no model to track an investment portfolio. Following every agonizing pitch and at-bat is a habit that will lead to disastrous investing results.

A well-constructed portfolio is designed to produce the ripest fruits decades from its commencement. This differs vastly from a 16-game NFL season.

This doesn’t mean you should hang up your Saquon Barkley jersey and spend your time contemplating the meaning of life.

Being a fan does provide positive benefits; Sunstein states:

“Being a fan also provides a connection with children, parents, grandchildren and grandparents. That’s gratifying, even meaningful. True, the distress of a loss might be acute, but perhaps it is outweighed by the overall benefits of fandom. There’s also a question whether the study’s findings generalize to other sports, such as baseball, football, hockey or tennis.”

Watching the daily movements of the markets is hazardous to your wealth.

Save your inner for fanboy for the Jets, Mets, and Knicks.

They need your help much more than global capitalism.