EVERYONE is affected by a bad 403(b) plan. Taxpayers, students, and teachers all suffer the consequences of the misdeeds of price-gouging financial salespeople. The conventional wisdom is: “Why do I care about some teacher’s retirement plan?” Predictably, this is neither conventional nor wisdom; ignore this at your own peril.

First, let’s take a look how this issue affects you as a taxpayer. In the words of Bloomberg’s Laurie Meisler (the link shows the ugly numbers), “America’s public pensions are a ticking time bomb.” The debt of the entire state of Illinois is in danger of being downgraded to Junk Bond Status; this is due to a massive $119 billion deficit in its obligations. Most states guarantee these pension payouts in their state constitution. This means it’s an onerous process to change the bylaws. Taxpayers are on the hook for any shortfalls.

Tremors have already emerged in both New Jersey and Maine with government shut downs.

While South Dakota, North Carolina, Oregon, Nebraska, Idaho, and New York have 90%+ funded pensions, they are the exceptions to the rule. New Jersey, Kentucky, and Illinois have rates of 40% or less. Many more have an unacceptable 50-70% funding range.

Teachers do not have the under-funded pension market cornered. Retirement systems for police and firefighters have just a median 71 cents for every dollar needed to cover future liabilities, according to The Wall Street Journal. On a positive note, most police and firefighter 403(b)s are vastly superior to options offered to educators.

Most teachers do not contribute to their 403(b) plans, due to a misguided over-reliance on their pension system and a complicated, exploitative enrollment procedure. Add this to a general lack of understanding of the devastating effects of inflation, and we have a toxic retirement combination. A good 403(b) plan would alleviate this problem. It would also make the unfortunate, but necessary, reworking of some states’ pension obligations more palatable.

A well-managed 403(b) plan, combined with an employer match and a lower pension, is the inevitable outcome. This is the only rational antidote for grossly underfunded state pensions. This is especially true for all new hires. Michigan and other states are already doing this. An excellent 403(b) plan has the potential to save taxpayers billions and make sure teachers will receive a pension that will be there when they need it. The alternative is to keep the current system in place. This would be the height of irresponsibility for all parties.

Next, we look at the effect of these onerous pension obligations on students. Even in a state where the pension system is fully funded, students are affected by this issue. In NYC the per-student spending is $23,560. While this is a sizable amount, about 30.3% goes to fringe/retirement benefits or about $7,138. Another 23.4% goes to salaries, according to the New York Post. When you add in all of the other costs of running a massive school system, not much is left for the immediate needs of the classroom.

Teachers deserve high salaries and good benefits for the irreplaceable work they do. We just have to figure out a better way to inject more funds directly into the classroom along with satisfying the obligations of securing teachers’ pensions. Unfortunately, many of these systems were designed for a time that has passed us by. Today, many teachers may spend more years collecting a pension than they did working in the system. The math no longer works with so many retirees living into their nineties and beyond.

This makes the 403(b) component more critical than ever.

All of us are affected by changing demographics that have devastated many systems.

I see this myself living in Long Island, a suburb of New York City.  We pay about $17,000 a year in property taxes with the majority going to the school district. Though this number is enormous it did not stop our twin sons from being in a math class with over 30 students and important sports teams being eliminated from their middle school athletic program due to budgetary constraints.

A first-class 403(b) system could lower these costs by lessening the funding needed to maintain the pension system. Teachers would understand that a pension cannot be relied upon for all their retirement needs. It would also enable more money to be directed into the classrooms, where it is most essential. Transferring money from the pockets of large insurers and brokers to fund the needs of students and teachers around the country is a deal few would turn down.

Finally, many teachers do not benefit from the current structure of many pension plans. According to ValueWalk, more than 50% of all teachers will not qualify for any pension. 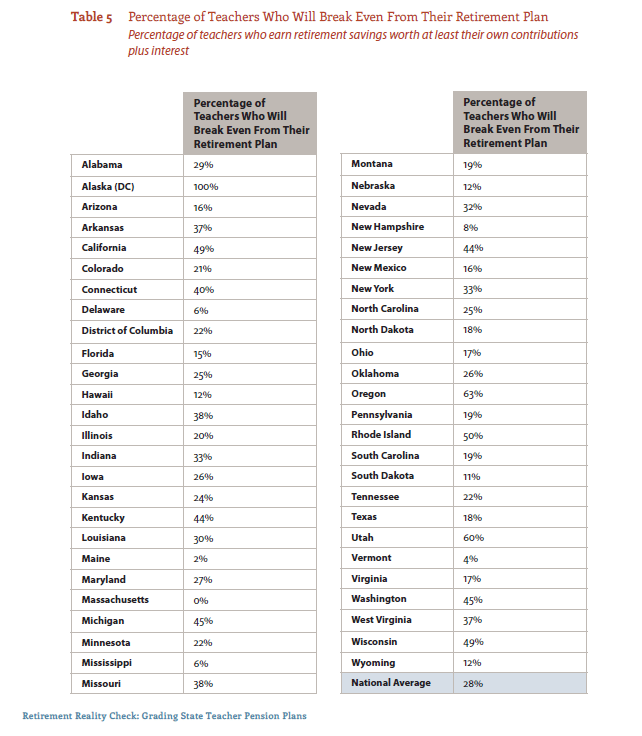 Many teachers leave the system before they are vested in their pension plan. This leaves them with nothing. Combine this with an awful 403(b) plan that they probably never contributed to and we have a major problem. The most important early years of employment for investment compounding are often wasted in the current system.Unfortunately, these valuable years can never be retrieved. They are permanently confiscated by high investment fees or lack of employee participation. This is due to the absurd complexities and conflicts of the current system.

Many of our best teachers are those with the most experience in the classroom. However, some teachers will also stick around to collect pensions long after their motivation and physical ability to engage students have left them. Since their pension might be their only source of income, (in some states, teachers do not collect social security) they linger way past their prime. This damages their own health along with cheating students out of the talents of new, more motivated teachers. A good 403(b) would let these people retire with dignity and also create badly needed jobs for the next generation.

Bad 403(b) plans have enormous effects on teachers, taxpayers, and students. To fix this problem, everyone will have to make sacrifices to protect the current pension system for future generations. The right mix of changes would benefit all parties involved.  In addition, a transparent, low-cost 403(b) plan, along with an employer match would also help to attract more qualified individuals into the teaching profession. Most would agree we certainly have enough hedge fund managers and lawyers.

Many states have mismanaged their systems for so long, more drastic actions than just tweaks to the system are needed. Teachers deserve better than false promises.

I do know one thing. The first step to attacking this crisis is to eliminate the enormous amount of money insurers and brokers are making from misleading teachers in their high-fee, conflict-infested retirement plans.

This can be a down payment on a new system that will provide for the needs of all stakeholders for generations to come.