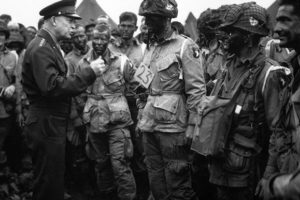 “I hope to God I know what I am doing.” – General Dwight D. Eisenhower, Supreme Allied Commander

Meticulous planning and a good deal of luck are two of the most important ingredients for success. Like the old saying goes, “Those who fail to plan, plan to fail.”

This is true in creating a financial plan or, more importantly, planning the largest military invasion the world has ever witnessed.

The details that went into the preparations for Operation Overlord during D-Day, June 6, 1944, were mind blowing. After reading about these intense machinations, it simply astounds me that many people do not know basic facts about their portfolio; such as, how much they pay for their investments, what they own, or where the securities are held.

In our firm, we believe the time to prepare for the eventual financial storm is before it occurs. It is no coincidence that two of the most important members of our team, Patrick Haley and Bill Sweet both had distinguished careers in the armed forces. Their attention to detail and healthy respect for the unpredictable comes through in everything they do for our clients and our company.

This Memorial Day weekend gives us an excellent opportunity to review how we should approach our finances.

Do not take ANYTHING for granted.

Let’s go back to 1944 and focus on uncertainty that makes market corrections seem like child’s play in comparison.

General Eisenhower was in charge of an invasion force that included 200,000 seamen and merchant marines; crewing 59 convoys, carrying 130,000 soldiers, 2,000 tanks and 12,000 vehicles. 20,000 paratroopers, along with massive air support, were also involved in this mammoth undertaking.

Eyewitnesses who observed this force in the early hours of that fateful morning described it as “a gigantic town afloat” and “more ships than sea.”

Before the Allies got to this point, they had to plan for everything that could go wrong that they could imagine (and some things that nobody could ever imagine).

Some of the nightmare scenarios included:

Ponder running this stuff through a Monte Carlo simulation.

The planning for these horrific consequences required open minds and the elimination of deadly group think.

Eisenhower stated, “I consider it to be the duty of anyone who sees a flaw in this plan not to hesitate to say so. I have no sympathy with anyone, whatever his station, who will not brook criticism. We are here to get the best possible results.”

Just like a real financial plan, uncertainty was embraced, not ignored. Winston Churchill commented, “Let us not expect all to go according to plan. Flexibility of mind will be one of the decisive factors.”

By no means was this undertaking thought to be a slam dunk. British casualty forecasts calculated a formula that projected three levels of combat: quiet, normal and intense. The anticipated carnage for June 6 called for a new categorization: double intense.

Regarding the evening paratroop drop, a British Air Chief Marshall pleaded to Eisenhower, “If you do this operation, you are throwing away two airborne divisions in a futile slaughter.”

It is no wonder Eisenhower constantly carried seven “good luck” coins in his pocket.

To add to the intense pressure Eisenhower faced, he knew 50% of American troops arriving to fight in this battle would be teenagers.

Eisenhower had the weight of the world on his broad shoulders. He wrote to his wife Mamie, “How many youngsters are gone forever? A man must develop a veneer of callousness.”

To try to avoid a possible slaughter, Eisenhower instructed his commanders, “Review to the last detail every single thing that may diminish the hazards.”

Still, some things were beyond his control. The weather topped this list. It was speculated the odds of getting the conditions to support both an air and sea invasion for 72 hours in June along the Normandy coast were 13:1.

Eisenhower was unsure of the outcome despite the meticulous Allied planning.  He composed a note to read to the public in the event of the very real possibility that the invasion failed with disastrous consequences. It stated, “Our landings have failed to gain a satisfactory foothold and I have withdrawn the troops. If any blame or fault attaches to the attempt it is mine alone.”

Before the invasion, the senior officer on Omaha Beach told his officers, “You’re going to find confusion… We must improvise, carry on; not lose our heads. Nor must we add to the confusion. ”  These words eerily presaged the intense carnage that was to shortly follow.

It would be a difficult undertaking to find better life advice than this.

As we know, the unbelievably brave actions of the Allied military, combined with Hitler’s gross military incompetence, enabled our forces to smash through the German’s feared Atlantic Wall and defeat the Nazis.

Of equal importance, the gods shined upon the Allies. The weather broke and, after a one-day cancellation, the invasion was allowed to proceed; despite the steep initial odds.  Never underestimate the role of luck in any major undertaking, success or failure.

That being said, there is no substitute for planning for the unforeseen in both your finances and, most important, in situations where there is a thin line between life and death.

On this 2017 Memorial Day weekend, we need to reflect, not only on this process; but also on the sacrifice the Greatest Generation made for us and the courage our modern warriors continue to display.

I could not be prouder to work in a place that had the wisdom and foresight to hire military veterans, like Patrick and Bill.

Source: The Guns at Last Light by Rick Atkinson

Anthony is currently heading the Educator/403(b) Division at Ritholtz Wealth Management LLC. The goal of our division is to transform the way teachers save for retirement.