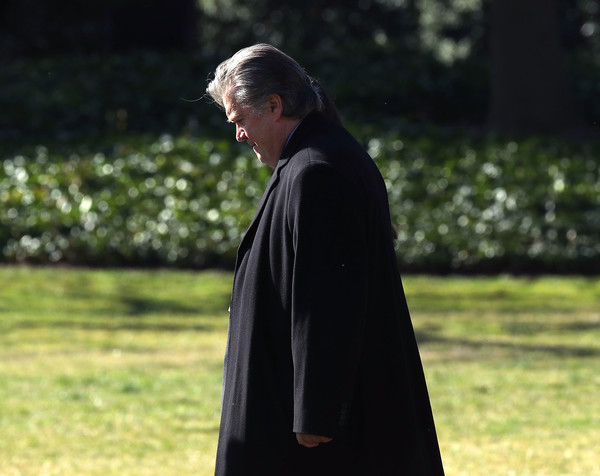 All of us may pay a steep price for the awful investment decisions of Steve Bannon’s father.

During the height of the 2008 financial panic, Marty Bannon sold his large concentrated position of AT&T stock at prices near generational lows.

According to The Wall Street Journal,

“The only net worth my father had beside his tiny little house was that AT&T stock. And nobody is held accountable?” Steve Bannon, 63, said in a recent interview. “All these firms get bailed out. There’s no equity taken from anybody. There’s no one in jail. These companies are all overleveraged, and everyone looked the other way.” “Everything since then has come from there,” he says. “All of it.”

This event led Bannon to become a strong proponent of “America First” Nationalism. It also galvanized his intense opposition to “globalization.” In his role as Chief Strategist, he often encourages President Trump’s anti-immigration and protectionist trade impulses.

Bannon has tremendous influence with the President. This ranges from speech-writing to cabinet appointees. A fair question to ask is. “Should the atrocious investment mistakes of Bannon’s father be the reason to reshape economic policy?”

While Marty Bannon seems like a good man, he is a textbook case of what not to do as an investor. Steve seeking to blame the system and then trying to radically alter it seems irresponsible to say the least.

It was not a “global conspiracy” that led to Marty Bannon’s life changing decision. It was his own mismanagement of his life savings that did the trick.

This had nothing to do with the news media, open borders, or elitists. It was Bannon’s fault.

Bannon’s dad admits this, according to The Wall Street Journal:

“Marty Bannon says he lost more than $100,000 because he sold the shares for less than he paid for them. It was a decision he made without consulting a broker or his family, including his two sons with investment backgrounds, who only learned about the sale days after it was finished. The shares subsequently regained much of their value.”

“It wasn’t a winner, so…” he says, trailing off. “Shame on me that I made that decision.”

Steve Bannon sees this another way. According to the Journal:

“The way Steve Bannon sees it, the institutions his father put his faith in failed him. He says Wall Street greed created the bubble that put his father’s investments at risk, and he blames the inertia of the Washington establishment for failing to prevent it.”

Bannon would be wise to heed the words of Sonny Corleone from The Godfather. “Tom, this is business and this man is taking it very personal.“

While Wall Street greed played a large role in the collapse, Steve Bannon needs to look closer at basic behaviorial finance before he attempts to blow up the system based on his dad’s cognitive errors.

Marty Bannon is a prime example of why are brains are not wired for investing. The fact he was 86 years old and had a portfolio that was concentrated 100% in one stock is inexplicable.

This led him to make several common behavioral errors.

He fell hook line and sinker for the recency effect.  He thought the horrors of 2008 would continue indefinitely.

He also held strong optimism bias. He believed AT&T was the same powerhouse it was during his 50 years of dedicated employment.

He suffered the terrible pains of loss aversion  The sharp decline in the stock was too unbearable for him to endure, despite the decades of gains he experienced in the past.

He was afflicted with meta-cognition. This led him to believe he knew something about the markets because he had a strong knowledge of the internal workings of the company. He did not even ask his son for advice  though he had been a big shot at Goldman Sachs.

He ran with the herd. Herding is very common behavior. Sell low during panics, buy high during bubbles. The siren calls of the media became too much for him.

He believed the folly of market forecasting. After Jim Cramer told “Today” show viewers to pull money from the stock market if they needed any cash for the next five years, Marty Bannon freaked out.

Steve Bannon is blatantly ignoring this data. Convenient scapegoats are easier to find than dealing with real facts and complex problems. In the words of Mark Twain. “Figures don’t lie, but liars figure.”

Bannon states, “Why can’t you revert back to a golden age?” he asks. “You can.”

The 1950s are gone forever. That world no longer exists. The Algos and Robots are in charge now.

Trying to bring “the good old days” back is just as crazy as expecting our brains to handle a stock market crash in a rational manner.

We have many problems in our country. The solutions cannot be found blaming others for mistakes investors have been making for generations.