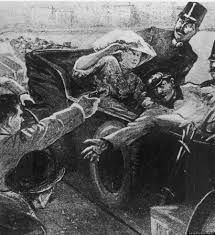 “I have written too much history to believe in it.” Henry Adams

The most important lesson history can teach us is: The unpredictable is the only thing that is predictable.

Looking back to the past should not be used as a forecasting guide to the future.

Expecting events to repeat themselves in order to profit from this knowledge is a loser’s game.

Morgan Housel stated, “People get history wrong when they look back at specific events and expect them to repeat in the future. It’s so easy to underestimate how much past events were caused by trivia and accident rather than trends that should repeat in some clean way.”

Being a former history teacher, I can look back at many events from the past that would only be predictable to a Monday morning quarterback.

The point is studying history IS enormously valuable. It’s just not for the reasons that many think.

History’s value is that it teaches us that anything can happen, especially things that are seemingly impossible.

There are few more important traits for a good investor than being humble.

A true student of history understands that empires have crumbled from the spread of small microbes that fatally infected millions.

Knowing this, one would have to be the king of hubris to believe their portfolio is immune from uncertainty and random events that they have no control over.

Morgan Housel hits the nail on the head when he looks at the record of investors who worship at the throne of linear history.

“Investors who have unshakable faith in markets reverting back to specific historical averages have some of the worst track records you can imagine. This goes into overdrive when you acknowledge the subjectivity of historical recordkeeping.”

It is bad enough that history is being de-emphasized in many schools because of state exams that only cover Math and English.

We are dealing with a double-barreled problem. Students are not learning enough about the subject and, when they do, the main point about the lessons of uncertainty are often glossed over.

This is not a positive for aspiring investors.

Using history as a toolbox for confirming what you already think or its predictive value for future events is a very dangerous game to play for investors.

If you don’t believe me, go ask the Aztecs.