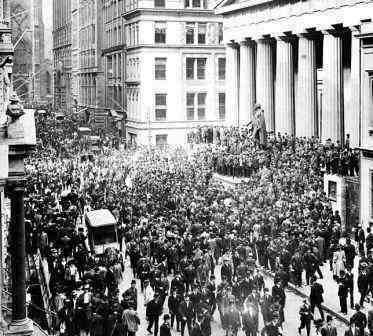 “No problem can be solved until it is reduced to a simple form.” – J.P. Morgan

J.P. Morgan believed in making simplicity paramount when tackling complex financial issues, and so should you.

Let’s take a trip back in time to the “good old days” of 1907: An era when women couldn’t vote; public lynching was far too common; and children labored in coal mines, instead of going to school.

In addition, there was no Federal Reserve. Despite the drivel you might hear from the alt right and gold bugs, this was not a good thing.

Recessions and depressions during this period were frequent and devastating. The country relied on the kindness of J.P. Morgan, and his like, when the sh*t really hit the fan.

J.P. Morgan was a stalwart in this regard. He often backed up his famous quote, “Any man who is bearish on the United Sates will go broke,” with his millions.

In 1907, things got real. It got so bad that the president of the Stock Exchange at the time, Ransom Davis, was quoted as saying if he had to close the exchange two hours early, he was not sure it would ever reopen!

There was a run on the banks, especially the less financially secure “Trust Banks,” who often lent money to brokers; who, in turn, funneled this to their clients’ margin accounts. Back then, most of the exchange transactions were done with borrowed money.

Add to the mix there was no FDIC, and you see where this was going.

Banks started to fall like dominos. The country turned its lonely eyes to J.P. Morgan.  Morgan realized the gravity of the situation and famously said, “This is the place to stop the trouble then.”

He decided to bail out the Trust Company of America. The problem was that people were withdrawing money from the bank faster than Morgan could pump it in.

Morgan did something absolutely brilliant. He came up with a few simple, yet ingenious, ideas.

The brainstorm credited with saving the system was Morgan’s order for the Trust’s tellers to work “inefficiently.”

He told the tellers to count the money three to four times before handing it over to customers. This delay cut the daily withdrawals from a staggering $8 million daily to around $2 million!

This was later considered to be his most important contribution to the crisis; amazingly simple, yet incredibly effective.

Morgan was not finished. He personally called his various newspaper contacts to run stories about home burglaries rising 1,000% since the beginning of the meltdown. He terrified people into leaving their money in the beleaguered trusts.

Though there were many more dramatic moments, Morgan essentially broke the back of the crisis with his uncomplicated yet brutally efficient ideas.

My friend and colleague, Ben Carlson, constantly points out that bad things tend to happen when people and institutions add layers of complications to their portfolios.

How can investors copy Morgan’s non-complex approach to complicated finances?

I have come up with a few ideas:

All of these can be accomplished without a degree in finance. Follow J.P. Morgan’s lead and remove the layers of complexity. This will allow speed and simplicity to emerge.

Not convinced yet? Sir Isaac Newton chimed in on the subject also: “Nature is pleased with simplicity and nature is no dummy.”

Don’t be a dummy with your money. Making money matters complicated to impress others or to “beat” the market is a game played by fools.