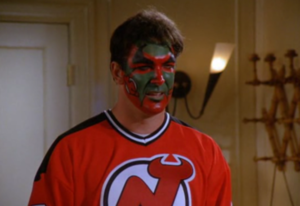 Watching and talking about sports might not be the waste of time many believe it is.

Does this mean you should paint your face before going to a hockey game like Puddy, Elaine’s on-again, off-again boyfriend from Seinfeld?

Should you wait hours on the phone, wasting incalculable time for the opportunity to speak about some ridiculous, hypothetical sports trade on the local sports radio show?  Unless your goal is a dark future composed of zero contact with the rest of society and living in your parents’ basement, the answer is no.

This does not signify that some knowledge of sports indicates doom for your future economic prospects. The key word here is some.

William Poundstone, author of Head in the Cloud,  drew some interesting conclusions from a recent, three-question sports quiz he created:

It turns out that those who received a zero on this quiz averaged annual income of $33,969. Those who scored 100% earned $85,245!! The later group also reported being 50% happier than their sports-ignorant counterparts.

The question is: Why is there such a wide discrepancy in financial outcomes?

Poundstone has an interesting theory that he has proven in other studies similar to this; that is, “General knowledge correlates strongly with income. Surprisingly, specific knowledge, such as science and spelling, has a weak correlation.”

Interestingly, when Poundstone created another (and much more difficult) sports quiz, the results displayed little correlation between those who scored terribly and low incomes.

It could be that knowledge of sports trivia is a good indicator of overall general knowledge, since sports is so persuasive in society. According to Poundstone, “sports metaphors are a hallmark to accessible communication.”

Think of terms that politicians, corporate CEOs and military leaders throw around, such as: Hail Mary, Fat Pitches, and the Final Innings.  These expressions, Poundstone asserts, “…have all become staples of general communications across all media platforms.”

Poundstone contends that a future predictor of income is more contingent upon the breadth of one’s knowledge, than its depth.  A broad liberal arts education over an accounting major would be a prime example of this concept.

Poundstone’s Breadth versus Depth argument could be directly applied to successful investing.

Is it necessary to fully comprehend the Capital Asset Pricing Model (CAPM) in order to generate superior investing returns?

Does an investor need a comprehensive background in complex technical indicators, such as Stochastics, in order to be considered a brilliant investor?

The answer to both of these questions is a resounding “Hell, no!”

In fact, presumed expertise in the investing arena often leads to overconfidence, the ultimate death knell for returns.

Just think of all the oil analysts who supposedly had a deep intensive knowledge of this one particular commodity market. In fact, all they do is focus, 24/7, on the intricacies of the pricing of crude oil.

It turns out that none of them saw the massive collapse in oil prices. This devastated the portfolios of investors who concentrated their investment allocations with companies involved in the exploration and production this product.

Most investors would be much better off with a broad understanding of investment concepts and engaging in constructive behaviors, such as:

All of the above actions do not require an M.B.A., C.F.P. , or an advanced degree in mathematics. A broad general knowledge of the markets, fluency in basic math, along with some common sense and behavior control are the ingredients for successful investing.

If it turns out this would be a reach for you, find an advisory firm whose investment philosophy is based upon these principles.

The fund manager who has deep knowledge of small biotechnology stocks, or the hedge fund that specializes in Russian debt markets won’t do.

Simple sports trivia leaves us with some valuable clues. Knowing that there are 11 positions on the soccer field is much more important than being able to identify the captain of the Croatian National Team.

General knowledge of many topics might just make you a wealthier and happier person in the long run.