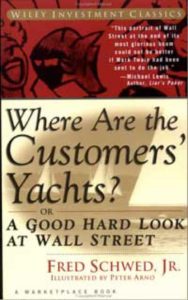 Markets can be very violent on the downside. The old saying —  Markets ride the escalator to the top and the elevator to the bottom — is still quite relevant.

The past week or so has been a rocky one to say the least. This is the time to review the lessons learned from the past. The alternative of listening to hysterical nonsense from forecasters will only lead you to heaps of trouble.

Where the Customers’ Yachts? is a timeless relic which should be read by anyone who professes the slightest interest in finance.  Though written after the infamous 1929 crash, its contents are completely applicable in 2016. In the words of Mike Bloomberg in his review of this classic tale, “The more things change, the more they remain the same. Only the names have been changed to protect the innocent.”

Here are ten quotes that can serve as a force field to ward of investment charlatans. Ignore these quotes at your own peril:

Though Fred Schwed wrote this book almost a century ago, nothing has really changed. People are as gullible as ever. Financial sharks still prowl the markets looking for their latest prey with bogus products in hand. The song remains the same.