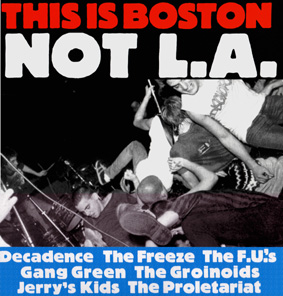 Definition of Poseur: “A person who pretends to be what he or she is not: an affected or insincere person.”

When I went to college in Boston during the 1980s, there was a great debate taking place. I am not talking about whether the Socratic Method was still a relevant teaching strategy. The issue was much more serious.

The burning question was which city had more hardcore punk music? Boston and L.A. were vying for this title. Each considered the other poseurs amongst other things. Forget Tupac and Biggy, this was the original east/west coast beef.

An album was created by a bunch of Boston Bands called This Is Boston Not L.A. The purpose was to prove Boston was clearly raunchier and more authentic than the L.A. surf punks. During my wilder days, a friend of mine tried to recreate this infamous album cover involving a fraternity party, several strangers and a couch … but I digress.

Since I am very partial to Boston, they will always be the winner of this hardcore dispute.  Any town with bands named The F.U.’s and Jerry’s Kids takes the crown in my humble opinion.

Investing is not much different. There are those who have real knowledge and those who pretend. The former have paid the price and have the aptitude.

Others are poseurs. They have the looks, breeding, and vocabulary — but no substance. Ever wonder why most bank C.E.Os have the same resume?  An Ivy League school and lacrosse expertise does not a serious investor make. We learned this all too well in 2008.

How do you distinguish between the two? I have classified five types of investment poseurs you need to be on the lookout for. These people will often talk the talk, but not walk the walk. Listening to them violates the first rule of investing. Don’t do stupid stuff.

1. Political Investors – These are the type of people who say things like “The Republicans will win the election, so buy defense stocks.”  Others will proclaim “When the Democrats get in, sell healthcare. They will regulate it to death.”

Over the past several years, healthcare has been the best preforming market sector.

By the way, a Democrat has been president for the past seven years. Defense stocks have not done too shabby themselves Avoid these people, and their “reasoning” like the plague.

2. Dead Enders – These prophets of doom also violate a cardinal rule of investing. By continuously forecasting the apocalypse, they are making a huge bet on a low probability event.

Investing is all about choosing strategies that have the greatest probability for success. Since nothing is a certainty regarding markets, this way of thinking is the most rational choice.

Hyperinflation, debt defaults, etc. are not very likely to happen in our country. Wagering on them has been a consistent money loser. It is amazing that many still don’t realize these people are saying this stuff to draw attention to themselves. Their mission is not to make you money but to enrich themselves. Besides, if they were right, who would be left to collect from, anyway?

3. Jargon Meisters – These people love to throw fancy terms around. Often, terms like liquid alts, convexity, and  semi-variance are peppered into the conversation. This is designed to intimidate the listener, who is often afraid to ask questions for fear of looking stupid.

As a Former Goldman Sachs money manager once revealed, “The quickest way to make money on Wall Street is to take the most sophisticated product and try to sell it to the least sophisticated client.”

These words are spoken with great certainty to make the speaker sound more formidable. Be forewarned, this poseur becomes even more dangerous if he is wearing boat shoes without socks or enlarged cuff-links.

4. Immediate Act-ers – Investment magazines are famous for this behavior. “10 Stocks to Buy Now” is often splashed across the cover to entice the naïve investor. The hype can also be found in must-have I.P.Os (Remember Alibaba?) and hot sectors, like marijuana stocks.

The immediate need to invest in “fracking” companies a few years ago is a prime example of this. “Buying these companies when oil was at $100 a barrel will seem like bargain when it hits $200,” they said. How did that one turn out? Anyone who wants you to invest your money immediately is something other than a master investor. Salesmen do not drink from the fountain of true knowledge.

As Jason Zweig stated, these types “attempt to predict the unknowable, by measuring the irrelevant.”

In some ways these guys are more dangerous than many of those mentioned above. They actually work pretty hard and have a lot of fancy formulas to back up their predictions. The problem is: No matter how smart you are, you cannot predict the unpredictable.

Short-term market movements are based upon irrational human behavior. Good luck figuring that out. Their shallow knowledge of what is most likely to happen is cloaked and concealed by their dexterity with numbers.

Don’t be fooled by this. It has been proven many times your guess is just as good as theirs.

In the end, don’t be deceived by well groomed pretenders (not the Chrissie Hynde variety). Most of what you see and hear in the mainstream media is plain old marketing. This stuff is designed to generate revenue for investment firms and certain individuals, and not much more.

In many ways it was much safer stage diving at a Groinoids concert at The Channel than following the advice of an investment poseur. A broken bone or two is preferable any day to destitution in retirement.

Your best bet is to hire a fee-only CFP who believes in evidence-based investing. Their most important job is to manage your behavior during rough times and focus on controllable financial events inclusive in a comprehensive financial plan. These people are worth their weight in gold.

As an added bonus, these guys might be wearing jeans and not suspenders with mini Lacrosse sticks.

(Full Disclosure: After seeing a kid in a Mohawk wearing a black leather jacket with an inscription in white tape on his back “Faith Destroyed Bored Youth,” I spent a good part of my adolescence dressed in black and angry at the world. Youth is definitely wasted on the young.)