High-fee, actively managed mutual funds are sold, not bought. Like the Chicago Cubs, their long-term record of achieving top performance is abysmal.

The million-dollar question is: Why do people still stick with these different versions of atrocious track records? Thankfully, for long-suffering Cubs’ fans, things are changing for the better; but not so much for the fund owners.

In spite of their recent success, the Chicago Cubs have not won a Word Series since 1908; the year the Czar was still running Russia and Mark Twain was writing books!  Amazingly, over this century-plus period, the Cubs’ attendance record has been sterling.

Chalk this up to one Philip K. Wrigley, their brilliant owner. Wrigley understood that Cubs’ fans were no different than the consumers of his chewing gum.  He understood with the right advertising campaign, “They could be made into consumers of baseball too,” according to Jerry Useem’s article, “The Curse of the Loyal Sports Fan” in The Atlantic.

Wrigley’s gum company spent as much as 25% of its revenues on advertising. This was an amazing sum in any time period. Fortune Magazine marveled, “This matched by not even the cigarette industry.”

“Wrigley’s company became an ad agency disguised as a gum wrapper.” according Useem.

The Cubs became all about marketing, rather than performance. From the lush green ivy growing on the outfield walls, to their stylish uniforms, experience at the ballpark overshadowed the final results of the games.

Though the Cubs were perennial bottom dwellers, their fans still came out in droves. While other teams with similar records heard crickets, Cub players still had the support of millions. What gives?

It seems high-fee, actively-managed mutual fund companies learned a great deal from Mr. Wrigley, as shown in the figures below:

Share of U.S. stock funds outperformed by their indexes

While these facts are indisputable, the majority of investors’ monies still resides in these products. As you can see from the chart below, the trend is changing but the numbers show active funds still dominate the field: 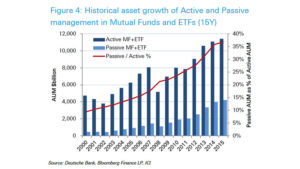 Advertising and marketing by these companies provide the answers to both questions. Celebrity spokespeople like Tommy Lee Jones and football great, Joe Montana, are often used to sell a story rather than focus on hard data. This mirage of success by association can be very enticing.

These companies use terms like “average” in a very negative way. “Why be average, like the rest of the knaves? You can do better with our expensive product.  After all, you get what you pay for.”

The illusion of uber- brilliant stock pickers implementing complex mathematics to generate market-beating returns is constantly pounded into the hearts and minds of investors.

This message does not come cheaply. The financial industry spends about 30 times more on marketing than on investor education. After all, if their investing customers were to be educated, the golden goose would be slaughtered.

Famed management consultant, Peter Drucker, once said, “The purpose of business is to create and keep a customer.”

These companies are experts at this. Their sophisticated marketing programs spin the web which traps their customers. In the words of the Eagles, “You can check out any time you like, but you can never leave.” Expensive back-end loads and asset-backed loans make these accounts very “sticky” in broker parlance.

The good news is the tide seems to be shifting for the Chicago Cubs and against high-fee, actively-managed mutual funds. Vanguard, a low-cost, high- performing fund company is becoming the Goliath of the industry. The Chicago Cubs are stocked with terrific young players and are led by data and performance-driven management.

The day will come when Cubs’ fans will watch their beloved team break their hex and win a World Series. The cherry on the cake would be if they were simultaneously glancing at their low-cost, passively managed portfolios of globally-diversified index funds, while the Dow hits 100,000.

Last time I looked, there was no law against dreaming.